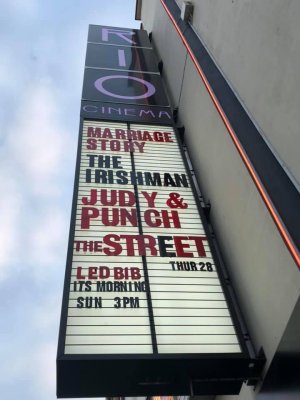 An otherwise drifting grey November afternoon is given focus and brightened considerably by a visit to a splendid art deco cinema in the culture hub that is Dalston. Led Bib, a long-running and cutting edge band, nominally falling within a spectrum entitled “jazz” have taken a diverting step sideways with their latest rather splendid waxing, entitled It’s Morning, and this afternoon’s matinee is the album launch show.

Led by drummer Mark Holub, the Bib have previously scorched ears with some neat feral blasts, but this time the skronking is turned down to accommodate the vocals of Sharron Fortnam, whose sonorous and well-defined tones stroke the album like a satisfied cat winding its way around your legs and your heart. The resulting song suite is something quite special.

And so it is in a live context, more of which later. At around 3pm the crowd file into the cinema, a surprisingly plush and spacious area where even a lanky git such as me can stretch out and relax. The reason we are in a cinema, and not the usual subterranean dive these things are normally held in, is that for their album launch Led Bib will be accompanied by film. First up is a short supporting piece of abstract ciné-art by Rebecca Salter entitled Picture the Light, which as it suggests is a subtle presentation of light manipulation on film. This minimalist and engaging work is accompanied by Max de Wardener’s ambient Japanese themed music, led by the 13-string koto and the shō, a reed instrument, which here is nicely complemented by the clarinet.

After a short break, the main feature commences. The film made to accompany It’s Morning is by USA-based filmmaker Dylan Pecora, and a very odd thing it is to, saying something for Mr Pecora’s imagination, which changes direction on a whim, as a vane in very strange weather indeed. Part of the film appears in the YouTube video below, and that will give you an idea.

Over the next hour or so, Led Bib play though their new album, the songs being linked by extended improvisational sections, with the film also being manipulated by VJ Oli Chilton, to tie in with the music. The whole is fascinating, and the hour flies by.

As is usually the case, the music of the album, fine as it is, takes on a new life in a live environment, notwithstanding the film, which transorts it to another place completely! Pecora inhabits another world, making my placement of the lyrics in my review seem entirely prosaic in comparison. The sinuous bass playing of Liran Donin provides a springboard for the flights of fancy by the quite extraordinary keyboard playing of Elliot Galvin, both of whom form the supple backbone of the instrumental improvised sections which follow and/or lead the film from a surreal take on nature into a quasi-religious devotional setting, and then off into some very dark corners of the soul. Perfect for a Sunday afternoon!

The twin saxes of Chris Williams and Pete Grogan occasionally burst free of their composed parts to remind one of the Led Bib sound of yore. You can tell the new album has upset the fans (all fans of anything are a bit mad, it goes with the territory), if this barbed comment by Steve Greenlee in JazzTimes online magazine is anything to go by. It is definitely one of the more amusing “no such thing as bad publicity” quotes: “Led Bib changes direction radically with its new album, It’s Morning. It should change back.” Haha! Brilliant!

Mr Greenlee is of course entirely wrong, and if he had seen this intriguing show may even have admitted as much. This is art, but not wilfully obscure, it may be just seems that way at first to us mere Earthlings. Where Led Bib go from here is anyone’s guess, but I’m on board for sure.