No Brainer really… Every Valley, the latest album by Public Service Broadcasting, is based on the history of the South Wales coal industry and its workforce, from more prosperous days right up to its savage destruction in the 1980s – so where better to launch their latest U.K. tour but in Cardiff? Recorded in Ebbw Vale where the band set up an improvised studio so they could immerse themselves in the area, this excellent album uses archive footage to illustrate the story and the fate of the disenfranchised workforce suffering from the destruction of their means of living – a story based in Wales but in this day and age of ever greater automation and globalisation this is a story that could be set in so many places around the world. However, tonight Every Valley has truly come back to its spiritual home and inspiration – there is a special atmosphere in the packed venue. 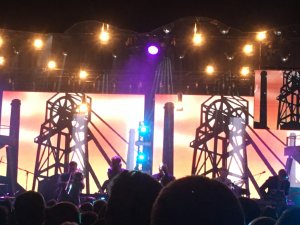 Against an evocative backdrop of giant colliery wheels and numerous miners’ lamps lowered over the stage, a violin presages the opening of Every Valley and the lyrical Welsh tones of Donald Houston (from the 1957 documentary film Every Valley) rings out, poetically introducing us to this proud mining community. Richard Burton’s rich voice evocatively tells us about the “arrogant strut of the Lords of the Coal face” and the “Kings of the Underworld” and the crowd is immediately drawn into a story of community pride. We come to celebrate these people, not pity them, as real power and drama are added to this opening by the horn section. The performance almost literally plunges us further into this world as Public Service Broadcasting delve in to The Pit, with Wrigglesworth pounding out a metronomic beat. The graphics portray our descent into that grim place of work far underground. This is a powerful opening to the set with J. Wilgoose Esq. leading a well drilled and rhythmical live unit on guitar and synths, and the versatile JFAbraham on bass, keyboards and guitars… amongst other things! 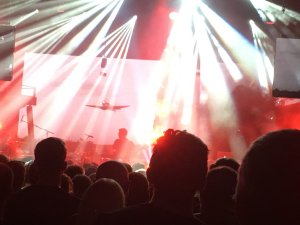 The show takes a left turn in atmosphere as they delve into lighter territory, performing high energy versions of Theme from PSB, with Willgoose on banjo, and the campness of The Now Generation, not forgetting that this is a rock gig and not a history lecture! Non-album track Korolev, from the 2015 The Race for Space sessions, is a surprising and welcome addition to the setlist. The images and graphics controlled and created brilliantly by ‘Mr.B’ on the two giant back screens and four smaller suspended screens are impressive throughout, especially on Progress as the refrain “I Believe in Progress” resonates around the hall, visually and aurally. J.Willgoose Esq. accentuates the guitar in a rocking version of Night Mail, and then the band delight the crowd with firm favourite Spitfire, as the unmistakable sound of a Merlin engine resounds around the venue and the gig seems to take off. 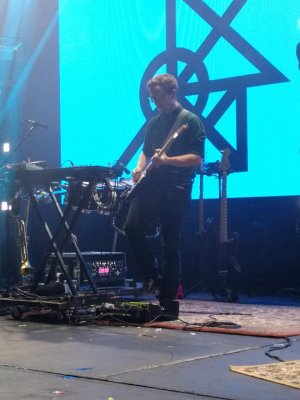 Public Service Broadcasting collaborated with James Dean Bradfield of the Manic Street Preachers on Turn No More, basing their lyrics on the famous poem about Wales, Gwalia Deserta. Willgoose explains that they had prepared this song in the hope that James Dean would be able to join them tonight, but sadly he is busy elsewhere so they decide to play it anyway for the first time ever, and his image and vocals are broadcast on the screens. Despite his absence they perform it very powerfully and one can only wonder how it would have been with that iconic Welsh figure on the stage with them. They tell us that they are from South London but they seem to have such an affinity with South Wales. The profound resonance of Every Valley for this show builds ever further as the band perform an evocative They Gave Me a Lamp, with touching and impactful images of the crucial role women had (and still have) in the Welsh Valley communities, especially in the 1980s during the Miners’ Strike, as heard via their verbal testimonies. The lovely horn sounds of Johngy Rittipo Moore, Rob Willson and Barnaby Philpott add an elegiac and then celebratory feel to this great song. Although this is a standing gig there is the sense of the audience especially rising to applaud this emotive performance, akin to a standing ovation. The sustained acclaim signifies that the crowd are also lauding those strong and brave women.

This resounding show takes a very different turn as the band launch in to a stunning version of All Out, again returning us to the fateful and bitter Miners’ Strike. The opening images are of groups of policemen menacingly approaching picketing miners, and almost universally the crowd loudly boo them. My friend pointed out that a lot of those present weren’t even born when the strike was on, I responded that memories run deep here. This visceral performance, with Willgoose riffing away heftily on guitar and Wrigglesworth pounding thunderously, shows that Public Service Broadcasting are a magnificent live rock act, their sound and images conveying so effectively the savagery and desperation of that dreadful industrial conflict. It’s a remarkable performance and almost brings the house down, such is the response. 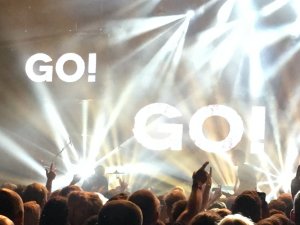 More atmospherically, they then delve back to The Race for Space to portray the story of Apollo 8, the first manned space craft to orbit around the dark side of the moon, in The Other Side. This piece is really enhanced in concert as there is a sense of anticipation as we wait quietly in the middle of the song for the sound of Apollo 8 to re-appear around the other side of the moon, echoing the tension Ground Control must have felt in 1968. The lunar narrative continues with the real crowd pleaser Go! We enthusiastically shout ‘Go!’ as the Ground Control crew confirm that systems are ready for the Eagle module to land on the Moon in 1969. There is a palpable sense of celebration both in the historic achievement itself and the scintillating performance of this excellent band. 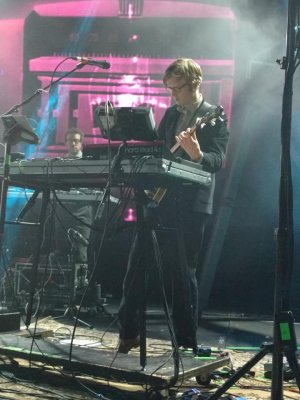 Public Service Broadcasting return for an joyous encore of the pulsing funk of Gagarin with a cosmonaut comically dancing around the stage – the horn players having great fun hamming it up for all they are worth on stage. The show appropriately reaches its peak with Everest interestingly introduced with brass as the crowd are taken to the heights by this final song.

However, there is one final special delight for Cardiff, very unlikely to be repeated on other dates of the tour, as Willgoose asks the audience to welcome onto the stage the Beaufort Male Voice Choir. The boisterous crowd silences itself respectfully as this fine group of men sing a beautiful rendition of Take Me Home, which they performed on the album. It’s a touching and emotional moment, simultaneously a celebration and lament for those mining communities. The crowd give them a fantastic reception which clearly touches the choir, and then spontaneously break into its own massed rendition of the Welsh national anthem. It’s a very special moment – I almost felt proud to be Welsh… and I’m not even Welsh, but my wife and sons are so that’s close enough! 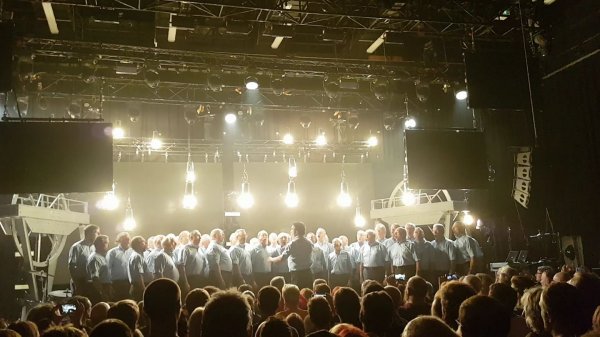 This was a triumphant gig for Public Service Broadcasting, cementing their special relationship with Wales. However, the power and meaning of Every Valley and its tour goes well beyond the Valleys. It can stand for any group of workers and their families destroyed by the excesses of capital and market forces without regard to communities. This band do not just deal with the broad brush of history, but touch on the stories of the real people at the centre of those events. Some may feel their use of sound archives is gimmicky, but this is a band which have matured to make and powerfully perform music that matters, that tells important stories in informative and fascinating ways… and how often can you say that about a band or a gig these days?

[With many thanks to Emma Barnes and Elizabeth Purkiss for their photos which are used with permission. Special Thanks to ‘The Informers – PSB Group Fanpage‘ on Facebook for help with research.]

SET LIST
Every Valley
The Pit
Theme From PSB
The Now Generation
Korolev
People Will Always Need Coal
Progress
Night Mail
Spitfire
Turn No More
They Gave Me A Lamp
All Out
The Other Side
Go!
~ Encore 1:
Gagarin
Everest
~ Encore 2:
Take Me Home (with Beaufort Male Voice Choir)