Public Service Broadcasting are on the road again for an extensive tour, their first since 2018, showcasing new album Bright Magic, and the question is after the enforced and lengthy lay off for… well, we all know why:

It is probably fair to say that the new album split some of the fans – some delighting in the shift towards more atmospheric and ambient electronic pieces, appropriately akin to German artists Tangerine Dream or Kraftwerk, considering the influence of Berlin on the making of the album. However, some have been less enthusiastic, hankering for the tried and tested formula of sampling dialogue from vintage documentary and other footage in a more rock and dance hybrid setting. Could Public Service Broadcasting pull these different strands together and still ‘Inform, Educate, Entertain’?

The atmosphere of Berlin and electronic music was evoked even before the gig with David Bowie’s Sound and Vision, from the 1977 album Low, playing on the PA; suffused with the spirit of Berlin, where it was recorded. Public Service Broadcasting with EERA walk onto the stage all dressed in white suits, ties and shoes. Four of them stand at keyboards in a shadowy set, and memories of Kraftwerk appearing almost Robot-like on stage are inescapable. The set begins very atmospherically with the cinematic drone and pulse of Der Sumpf (Sinfonie der Großstadt) which flows brightly into the shimmering sounds of Im Licht, with the band eerily silhouetted on stage, white lights projecting ‘Berlin im Licht’ on the venue ceiling. It is an understated, subtle and yet challenging start to the set, immediately laying out that the band will focus heavily on their new music, which comprises nearly half the songs of the show. The mechanical, insistent sound of engines plunges the Great Hall into Der Rhythmus Der Maschinen, which is accompanied by German phrases and fascinating images of engineering. This is a piece which stands out on the album (and features a small amount of their previous trademark sampled documentary dialogue). In a live setting, this piece definitely has much more impact, with added power as Wrigglesworth pounds away vigorously on drums and J. Willgoose certainly cranks up the guitar in the mid-section. The imagery from ‘Mr. B’ is fascinating as this song really starts to get the crowd moving to the hypnotic beat. 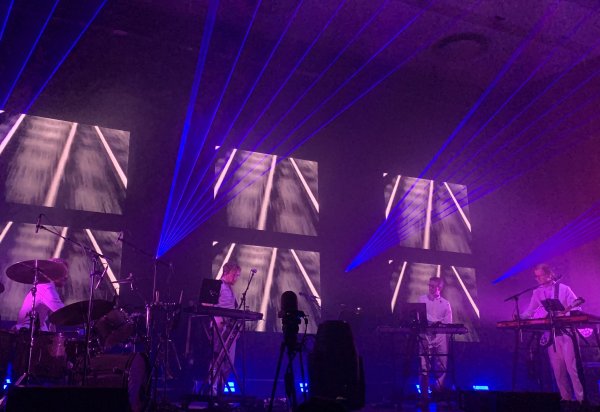 The singer and keyboardist EERA, who had provided the support act for the evening, becomes a focal point as she chants the refrain from Progress from previous album Every Valley. This is a clever song choice to transition from the electronic landscape of Berlin to songs associated with the mining industry, and is one of four pieces from that fine album. 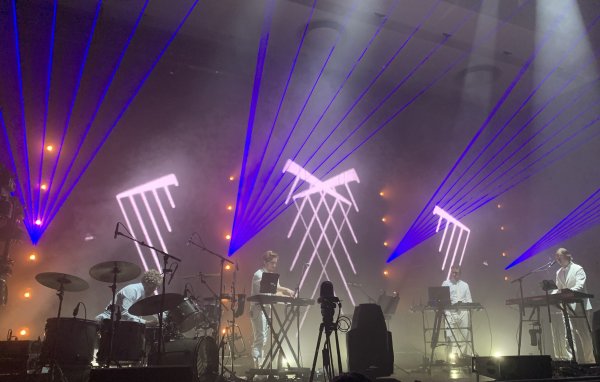 EERA has a beguiling and at times ‘other worldly’ voice which echoes around the venue. In a set populated with rather male-oriented songs about mining or space exploration, it strikes a good balance to hear them play the tinkling and delightful They Gave Me a Lamp, about the resilient and heroic women who supported their mining menfolk, especially during the 1980s miners’ strike. It may be easy for some to dismiss Public Service Broadcasting as rather ‘quirky’ or ‘gimmicky’ in the choice of their sound clips, but with a song like They Gave Me a Lamp they cast their light on a half-forgotten truth. The horns of the ‘Brassy Gents’ (John Rittipo Moore on Sax, Toby Street on Trumpet and Barnaby Philpott on Trombone) give this tribute to these redoubtable women added resonance. The bewitching voice of EERA returns centre stage for the gentle, almost diaphanous delicacy of Gib Mir Das Licht which features the sultry sax of Moore on his own. There is a dreamy blue start to the next song and the tempo picks up considerably as they ascend into the infectious electro-pop of Blue Heaven, with EERA featuring again with some lovely vocals.

One of the undoubted highlights of the whole show is a barnstorming couplet of songs which J. Willgoose introduces thus: “This is a song about a plane”. The unmistakable sound of the Rolls Royce Merlin engine of a Spitfire roars into life, much to the universal delight of the audience. This is always a great part of a Public Service broadcasting gig, but tonight there seems to be an added frisson and kick to this iconic number as Lesley Howard’s cultured tones (as Spitfire designer R.J. Mitchell in the 1942 movie First of the Few) punctuate this pulsing, rocking tribute to an iconic plane. There seems to be a more powerful drive behind this live version and at the end J. Willgoose moves to the front of the stage and cranks out a crunching, almost heavy metal coda on electric guitar – needless to say the place goes nuts!

This spectacular song is followed by an equally heavy rock discordant start to All Out from Every Valley, illustrated with disturbing scenes of bitter violence between policemen and miners from the miners’ strike of 1984/85. When I saw this in Cardiff on the Every Valley tour in 2017, these scenes were met with visceral shouts and waves of boos from the Welsh audience. There was not the same reaction in Exeter, and clearly memories and feelings about the strike and conflict run rather deeper in South Wales than in Devon. Nevertheless, All Out is presented with a hard-hitting force which conveys the depth of emotion and bitterness evoked by that sad period in recent modern history – indeed my Welsh wife, Bronwen, said she felt genuinely angry at the end of the song, such was the impact of the images and the relentless music.

Actually, discussing the impact of that song with her helped me to make more sense of the next part of the gig as Public Service broadcasting embark upon the extended and softly ambient Lichtspiel suite of pieces from Bright Magic. After the tumultuous and stirring Spitfire and All Out, this did feel rather an oblique ‘left turn’ into such different realms of sound as the band filled the hall with atmospheric waves of slowly morphing waves of synths… they really are in Tangerine Dream territory here. However, the effect is beguiling and emotionally calming after the power, anger and turmoil of the preceding song. The tempo increases with the second part, Schwarz Weiss Grau, the great lighting and staging appropriately monochrome as the colour words ‘Schwarz’, ‘Weiss’ and ‘Grau’ are projected at the ceiling above the stage. The Lichtspiel suite concludes in stark beauty with a synth wash behind a simple melancholic piano melody, the piano finally left alone to soothe the soul. 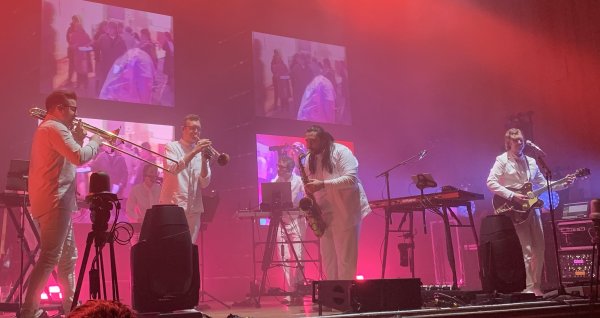 The gig then focuses on the brilliant The Race for Space album as the band commence with the dramatic piece about the flight of Apollo 8 in 1968, the first men to fly around the dark side of the Moon. The Other Side ends powerfully and in appropriately celebratory mood as the capsule comes back into contact with Mission Control. There is only place to go after that song, and that’s to land on the Moon itself with the great crowd pleaser Go!, and Mission Control’s decision to proceed with a landing. 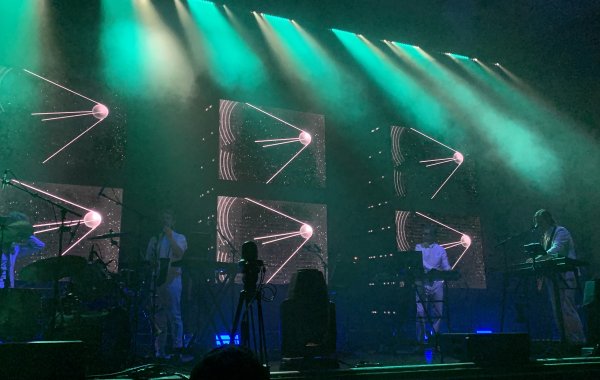 Go is humorously announced with the sampled NASA line “OK, keep the chatter down in this room”. The audience are loving the vibe and are dancing and bouncing along as the band are driven along so well by Wrigglesworth’s drums and multi-instrumentalist JF Abrahams on bass. The crowd shout along joyously ‘Go!’ and ‘Stay!’ as the sense of celebration is released into the room – it has been so long since gigs like this last happened and Public Service Broadcasting are riding along on a wave of release and optimism as a group of people just do something most of us have not been able to do since March 2020 – it certainly feels like the whole Hall are walking on the Moon at the end!

The encore features a throwback to their first album with the WH Auden poem from 1936, Night Mail, and the film it inspired, followed by the eye-catching multi-coloured skater visuals and clearly Kraftwerk influenced electronic pop of People, Let’s Dance with EERA on vocals. The electrofunk stomp of Gagarin sets the place alight again as the cavorting ‘Brassy Gents’ take centre stage, whipping the crowd into a frenzy and two dancing Cosmonauts jive across the stage as the dialogue incongruously intones, “Was it Hazardous?”, “Yes it was”, which always makes me smile. JF Abraham shows his versatility for final song Everest as he starts with a plaintive, elegiac Flugelhorn… and the band send us home ‘Informed, Educated and Entertained’ yet again… but also rather emotionally ‘Touched’.

I will be honest and state that after a VERY busy time at work and in life just before the gig, me and my wife and son dragging our sorry arses to a midweek gig felt like quite a stretch, to say the least. However, the sign of a great gig is that by the end we were transported to another place in our minds and no longer felt tired at all – that’s the Beauty and Magic of live music.

So, the answer to the initial question of ‘Have Public Service Broadcasting retained their live magic?’ is emphatically ‘YES’ – indeed, this concert felt like they had taken another step up in class as a live act with great musicianship, exuding a greater live presence and ever improving fascinating visuals in a wonderfully well performed gig. 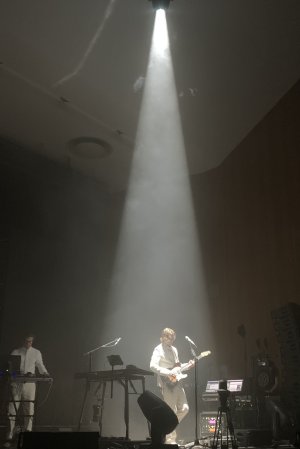 [TPA would like to thank ‘Informer’ fan Anne-Sophie Lelaquet for her help with naming the ‘Brassy Gents’ for this review.]