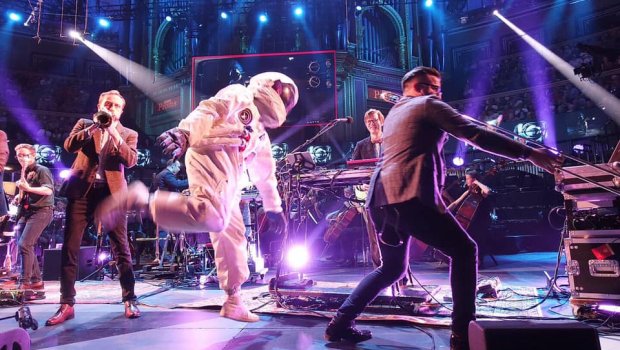 To mark the 50th anniversary of the Moon landing by Neil Armstrong and Buzz Aldrin in Apollo 11, Public Service Broadcasting had the honour of performing their Race for Space album at the Royal Albert Hall in a ‘Late Night Prom’, accompanied by the Multi-Story Orchestra and the London Contemporary Voices. It was fitting that such a momentous historical event was being commemorated in such an iconic setting. Similarly, it was essential that at the centre of this performance were the real voices and sounds associated with those men and women who achieved so much in Space exploration in those short years from the launch of Sputnik in 1957 up to the last Apollo Moon mission in 1972.

It seems apt that the initials of the President who inspired the Apollo programme are shared with JF Abraham of the band, who so deftly arranged the orchestral music which has adapted and augmented the original Race for Space album. This was first evident in the Introduction, performed with great feeling by the orchestra and choir, evoking a suitably ethereal atmosphere to set the scene for the epic events that were to unfold.

The famous speech of President John F. Kennedy featured in the Race for Space opening, with London Contemporary Voices to the fore with their crystalline sound. The Royal Albert Hall audience took up the clapping of the recorded crowd at Rice University in 1962, applauding his resonant words almost as if they were re-living that moment in time:

The Russian side of the Space Race was rightly reflected in songs such as Sputnik and Gagarin. Sputnik was the first song to utilise the enormous old fashioned TV screen suspended behind the stage, showing images of that legendary Cosmonaut and the understated speech clip: ‘Was it Hazardous?’ ‘Yes it was’, as a model of the Sputnik rose with lights streaming. Wrigglesworth’s drumming was particularly impressive on this pulsating track. The Multi-Story Orchestra’s instrumental contributions created a captivating extended intro and gave the piece added heft. In contrast, the arrival of the ‘Brassy Gents’ to centre stage gave an energetic and celebratory feel as suddenly the Proms was infused with Jazz and Funk. Dancing Spacemen added to the sense of fun as the Royal Albert Hall clapped along enthusiastically, right up to the false ending until the song splashed down with a well-timed re-entry to the piece. The concluding line “The Whole Planet knew him and Loved him” resonated around the hall, and it was becoming clear that the crowd were definitely loving Public Service Broadcasting.

The flip side of achievement was tragically conveyed in Fire in the Cockpit which was bravely segued straight from the euphoric Gagarin, evoking a very sombre and dark atmosphere, the piece respectfully adapted for orchestra by JF Abraham. It was genuinely touching to hear the tragedy of the deaths of Astronauts White, Grissom and Chaffee in Apollo 1, on the launch pad in 1967, portrayed with such poignancy. This piece showed the value of adding the orchestration, and the audience were left in stunned silence.

E.V.A., about Alexey Leonov’s first ever space-walk in 1965, was decidedly more rocky, with J. Wilgoose Esquire and JF Abraham in fine form on guitar and bass in a piece that felt more expansive than the original version, until it cleverly and effectively ‘floated’ musically, just like Leonov. In an evening of great moments the following piece, The Other Side, was particularly striking, starting with pizzicato sounds from the Orchestra string section which developed into a beautiful string and horn build-up until the pulsing synths and NASA control voices entered. Band and orchestra were in perfect sync as the tension and tempo increased with Apollo 8 about to go round the dark side of the Moon for the first time in 1968. The venue was dramatically plunged into darkness and virtual silence as Apollo 8 circled behind the moon. When it emerged from the other side, the lights, drums, guitar and other instruments all gloriously rose simultaneously and the crowd applauded, feeling almost as if they had been there waiting for the capsule to re-appear – it was a very memorable moment and captured some of what it must have felt like at the time.

Valentina celebrated the first woman in space in 1963, the gentleness of the choir and orchestra reflecting the feminine side of this story, although in some ways this felt like a brief hiatus before the drama of the Apollo Moon landing in 1969, portrayed so emphatically and imaginatively through the voices of NASA Control in Go! J. Wilgoose Esquire showed some class in dedicating the song to Chris Kraft, of NASA control on that historic day, who died shortly before the performance. Go! Has become a real crowd pleaser and the Royal Albert Hall joined in (mostly!) shouting ‘Go!’ and ‘Stay’ in sync with the captions and speech clips as Apollo 11 came in to land. In truth, this was mainly a band piece with a particularly rocking bass and drums conveying the drama and tension of the landing sequence. The rock continued with a tribute to the Russian Space designer Korolev, not on the original album but recorded in the same sessions and later released as a single. Added horns from the orchestra and the return of the ‘Brassy Gents’ gave this already heavy track even more weight. 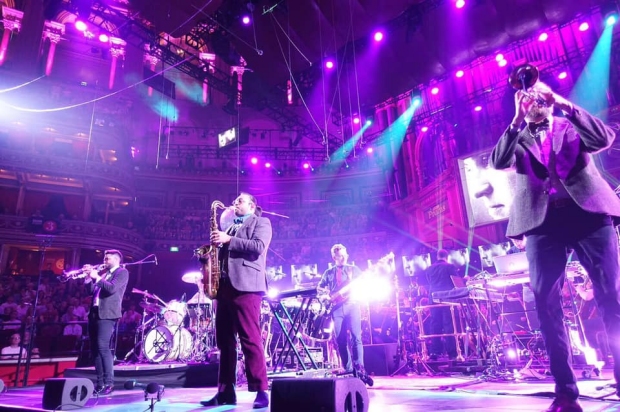 This momentous saga in human history was concluded with the pensive Tomorrow, using words from Astronauts Cernan and Schmitt, the last two men to land on the moon in December 1972 in the final Apollo mission. Subtle synth drums and later xylophone from Wrigglesworth (who was on superb form all night) combined with the rising choir and orchestra. Willgoose’s skilful guitar work underpinned a recap of all the images so memorably shown on the giant T.V., which also underlined just how much of an impact the Space Race made through television. This resonant song touched on a spirituality and a different perspective that Space travel at that time gave to humanity about the Earth itself, and the Royal Albert Hall crowd rose to applaud the band as they left the stage to great acclaim. The Multi-Story Orchestra and London Contemporary Voices remained to elegiacally and atmospherically bring proceedings to a close as the lights dimmed. 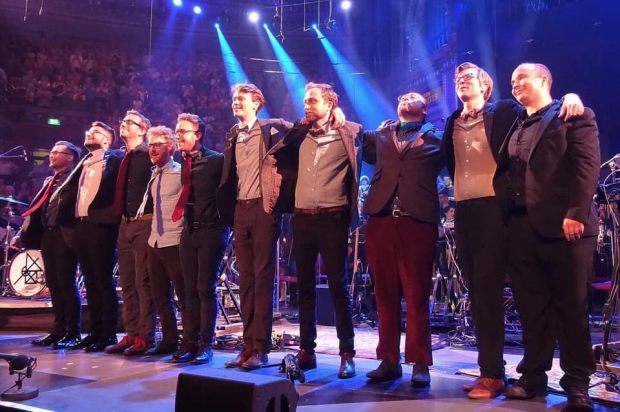 The audience felt a palpable sense of celebration, both in the historic event itself, but also the scintillating performance. Public Service Broadcasting’s music and images tell the stories of the real people at the centre of those events. This was not a hollow and mechanistic piece about machines and technology, but about the individual human beings who achieved so much. It was fitting that on a night commemorating one of Mankind’s greatest achievements this was Public Service Broadcasting’s Greatest Ever Night.

[All photos by John Gleeson used with permission and many thanks.]

SET LIST
Introduction
The Race For Space
Sputnik
Gagarin
Fire In The Cockpit
V.A.
The Other Side
Valentina
GO!
Korolev
Tomorrow
Coda
[No Encore] 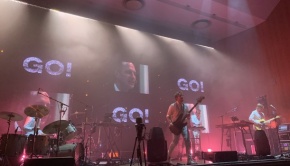