At ‘Progressive Aspect Palace’ we like Public Service Broadcasting (PSB) – we like them a lot! This is our third PSB gig review within 12 months so perhaps we won’t go into our usual detail and just give some impressions on yet another impressive live performance for this unique band.

Their most recent album, Every Valley, was based on the history of the South Wales coal industry and those who worked so hard in the pits. They recorded in South Wales and used the Wales Miners Library in Swansea to help their research. The success of Every Valley has seen PSB reaching the point that they are able to hold a show at The Royal Albert Hall, and as a warm up to that prestigious gig, PSB chose to thank the communities of Wales, as they had been so helpful and welcoming during their research, with a series of small-scale gigs in towns across the principality, mainly in the mining areas of South Wales. It seems entirely appropriate that Every Valley has returned to its roots with a packed and sold out gig at the lovely venue of the Pontardawe Arts Centre where there is a special atmosphere. 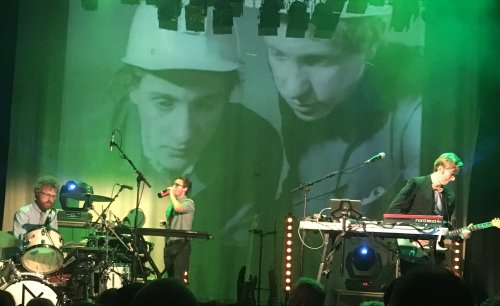 Every Valley is well represented in the show, commencing with the lyrical Welsh tones of Donald Houston (from the 1957 documentary of the same name), and Richard Burton’s rich voice speaking of the ‘arrogant strut of the Lords of the Coal face’. This quickly segues into a muscular performance of The Pit, with Wrigglesworth pounding out a powerful rhythm. Alongside him J.Wilgoose Esq handles guitars, banjo and synths with aplomb. Multi-instrumentalist JF Abraham on bass, keyboards, guitars and occasional horn skilfully completes the main trio for the evening. This very tight threesome produce an impressive array of sounds, with occasional appearances from an energetic horn section. 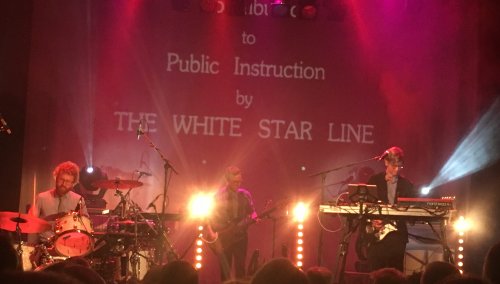 Go to the Road, Progress, They Gave Me A Lamp and Mother of the Village from Every Valley provide an interesting and often powerful narrative in the middle of the show, touching on different aspects of the coal mining story, including the role of women in those communities. PSB’s use of sound clips and film footage has been described as ‘gimmicky’ in some quarters, but they are absolutely inseparable and fascinating, especially in a live context. Their show artfully marries sounds and images in captivating testimonies to the real people remembered in those visual and audio archives.

Whilst PSB clearly respect the material and human stories upon which they draw their inspirations they also crucially remember that they also need to entertain with their music, exemplified in fun numbers such as Theme from PSB and the popular and thrilling Spitfire, complete with the distinctive opening sounds of those stirring Merlin engines. New song White Star Liner, based on the story of the Titanic and written for the BBC ‘Biggest Weekend’ event in Belfast earlier this year, yet again shows PSB’s acumen at dealing with history in an entertaining and yet respectful manner – letting the real words tell the story against a subtle musical backdrop. 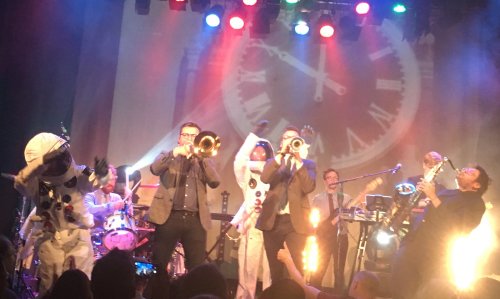 The Race for Space album is amply represented with five songs (if EP song Korolev is considered to be from the same sessions) and really shows the range of the band’s music and the varying perspectives they take on a fascinating subject. The Other Side filled the room with expectancy and tension as Apollo 8 astronauts historically went round the ‘back side of the moon’ in 1968, followed by the celebratory clamour of Go! based on the moon landing in 1969, with the whole crowd repeatedly crying out ‘Go!’ The cosmic space funk of Gagarin, so memorably added to by the energetic horn trio and dancing astronauts, is a real fun way to encore the show. Rittipo, Street and Philpott seem equally adept at adding brio with their horn instruments, but are also able to add some pathos and feeling at other times. 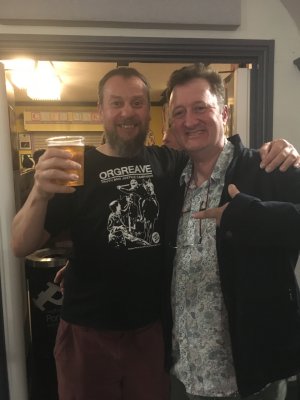 The final Every Valley song of the evening is aptly titled All Out which chimes out with real power and anger, remembering the bitterness and conflict associated with the miners strike of 1984 to 1985. One concert goer, Ryan, had come all the way from Stoke proudly wearing his ‘Orgreave’ t-shirt especially to hear that powerful song and it clearly meant a lot to him, as it did to many others in the crowd in an area which was badly affected by that rather dreadful episode in modern British history.

Compared to their main tour shows this was a more modest affair, clearly somewhat restricted in terms of staging, effects and additional musicians by the smaller stage – however, it was still a special gig for Public Service Broadcasting, demonstrating and confirming their special relationship with Wales. J.Willgoose Esq indicates that whilst they are from South London they feel a real connection with South Wales, as evidenced by these specially arranged shows. PSB are developing into a truly special band, whom continue to mine rich seams of history. Their music and images imaginatively and sensitively tell the stories of real people at the centre of those events… and such a connection should indeed be valued and celebrated as it clearly was in Pontardawe on a memorable night.

[All photographs by Leo Trimming and Andy Langran, used with kind permission.]