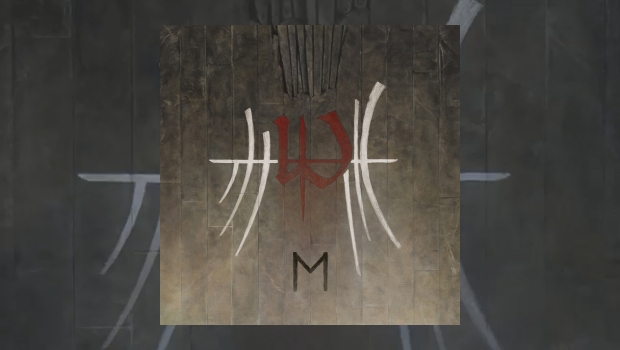 I will admit I’m a late-comer to Enslaved; my interest initially piqued by a reference in a Mikael Åkerfeldt interview some years back. Once I started exploring their enviably consistent discography I realized that unlike most bands that have been around for decades they didn’t hit an early peak and then slowly start the long fade downhill. By contrast they’ve been on a methodical ascent for a very long time; their music becoming more progressive, more intriguing and more thoroughly personal over the years.

E is their fourteenth studio album, and before we delve into the sounds within, let’s take a moment to ponder the cryptic album title. Here is the description from guitarist Ivar Bjørnson;

“Ehwaz (pronounced and used as what’s known as ‘E’, but drawn as an ‘M’) looks like and means ‘Horse’. Which is closely linked to its esoteric meaning; which is ‘trust’ and ‘cooperation’… It is about the symbioses that surrounds us; which are vital to our existence, to our development – on all scales: man and vessel (for instance horse, yes), a person and its significant other, child and parent, musician and instrument, chaos and order, subconscious and conscious, Oden and Sleipnir – wisdom and communication.”

The material on the album draws from this thematic concept and I believe is a perfect encapsulation of what makes Enslaved unique. Their entire sound is based off symbiosis of diverse and contrasting elements; harsh brutality and ethereal beauty, the raw and the refined, aggression and peace. Unlike several of their contemporaries, Enslaved has never removed the rough edges from their music, instead they’ve consistently expanded around it and worked to more effortlessly weave those disparate strains together. E demonstrates the maturity of this approach and hints at even greater heights to come.

Last year when keyboardist/clean vocalist Herbrand Larsen announced his departure from the group there was trepidation amongst the fans as to how this would affect their overall sound. Hebrand’s vocals and keyboard sounds had been a consistent ingredient during their most-impressive run of albums starting with Isa (2004) and concluding with In Times (2015). Those fears were completely unnecessary; the band selected a perfect replacement in Håkon Vinje, the 25-year old keyboardist (who wasn’t even born when Enslaved was formed) from Seven Impale. Håkon fits in seamlessly with the Enslaved sound; his vocals are comparable in approach to the departed Larsen, though his tone is slightly higher, but his keyboard playing is a significant upgrade.

Sacred Horse demonstrates the power of this new Enslaved line-up in all its pummelling intensity and deft mood shifts. After a momentary acoustic tease, it explodes with a stampede; a furious gallop propelled by Cato Bekkevold’s double-bass drums and the airtight riffing of guitars and organ. Grutle Kjellson’s caustic, battery-acid vocals have never been more powerful or complimentary; when this band slams the pedal to the floor there are few others that can match their heft, it’s deliriously entertaining. The first mood shift occurs just before the 3-minute mark with an inspired instrumental bridge section that leads into a glorious Hammond organ solo; this is the element that had been missing from Enslaved, a true soloist at the keyboard position. As is the norm with Enslaved the song continues to develop, exploring a moody eastern motif (mildly reminiscent of Paint It Black) with accompanying choral vocals before a brief, violent reprise of the opening.

Another example of Enslaved’s continuing maturity is how with E they’ve begun to approach the studio as another instrument, while their arrangements have always been complex their productions have generally been straight-forward captures of their live sound. Here there’s more focus on sound design and weaving effects into the arrangements. Jens Bogren (who is becoming the Alan Parsons of progressive metal) provides a beautifully detailed, balanced and inventive mix. The vocal arrangements have also become a primary focus of expansion, using layers of multi-tracks to create a massive choir effect.

Opening track Storm Son applies these tools (captured sound, synth effects, modulated pink noise, swirls of reverb) to increase the dramatic impact of an already epic, widescreen composition. The first couple of minutes are a joy, a beautiful circular layering of guitar and keyboards with Grutle providing an impressive ‘outside’ bass solo. This morphs into a melodic mid-paced riff which features Håkon’s clear tenor with occasional commentary from Grutle’s rasp. A harsh vocal verse and a short instrumental interlude follow and then at nearly 7 minutes it finally explodes into a rampaging metal juggernaut. I love the small details like the synth effect that’s mixed in with the guitar riff and the sounds of explosions that complement the drum part.

The track Axis Of The Worlds proves that Enslaved also has a sense of humour. The wonderfully bent opening guitar solo courtesy of Ice Dale is a gem; the bluesy twang completely alien in this environment. It’s a bit of a Prog lark, but it makes me smile. The track is surprisingly catchy and the way Håkon mirrors the guitar riffs on the organ is beautifully done, Jon Lord would be proud. The construction of the arrangement here is Grutle handles the harsh vocal verses while Håkon provides the hooky choruses, this same template is used on the shortest track, The River’s Mouth.

The most impressive pieces on E close out the album. Feathers Of Eolh is a swirling vortex of 7/8 progressive rock that ventures into surprising harmonic territory, it’s easily the most complex and technically challenging composition on the album. It’s also a rarity in the Enslaved catalogue because it features Håkon’s clean vocals throughout, in addition to Grutle providing his clean baritone vocals to the proceedings. Layers and layers of sound pile up during the conclusion creating a dizzying build-up of tension.

The release is provided by the crystalline beauty of the opening guitar riff on Hiindsiight. This could be my favourite Enslaved track yet. After lifting you up with the intro, they drop the floor out from under with a deliciously nasty doom section, then the opening melody returns and Kjetil Moster enters with a gorgeous saxophone break. The final four minutes of this song are simply beautiful, a plush cloud of droning shoegaze guitars and space rock vocal harmonies; it’s one of the best progressive rock arrangements I’ve heard this year.

[Note: This review is of the standard CD/LP edition, the Digipack CD release contains two bonus tracks that weren’t available for review.] 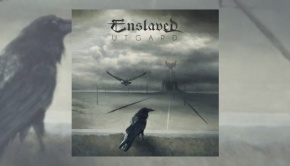