There is so much love for the music of Genesis from the years 1970 to 1977, and Steve Hackett, guitarist with the band during that period, has revitalised that affection with his live Genesis Revisited tours. Following the magnificent orchestral tour of 2018, Hackett and band have returned to perform the classic Selling England by the Pound album in its entirety on the latest tour, Steve Hackett’s most successful to date.

The first set was devoted to Hackett solo material, and with 2019 marking the 40th anniversary of Spectral Mornings, one of Hackett’s most popular solo albums, it was with the first track Every Day that he opened the show. This was an early opportunity for Hackett to harmonise with vocalist Nad Sylvan and then demonstrate his sublime guitar technique with a soaring solo. 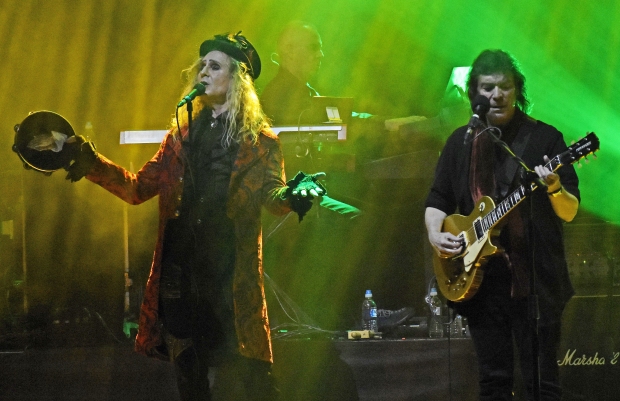 Knowing that the faithful had assembled in anticipation of hearing Selling England in full, Hackett joked that they would have to listen to some modern stuff first. Three tracks from his latest album At the Edge of Light followed, including Under the Eye of the Sun. Hackett has already declared his pride in this piece which will, no doubt, become a concert favourite for years to come.

Returning to Spectral Mornings, Hackett was joined by brother John on flute for the gentle, acoustic folk melody of The Virgin and the Gypsy. Tigermoth, inspired by war-time pilot memoirs, is a much more aggressive piece for Hackett to get his teeth into and he switches styles from delicate patterns to hard-edged riffs to soaring solos with such ease. 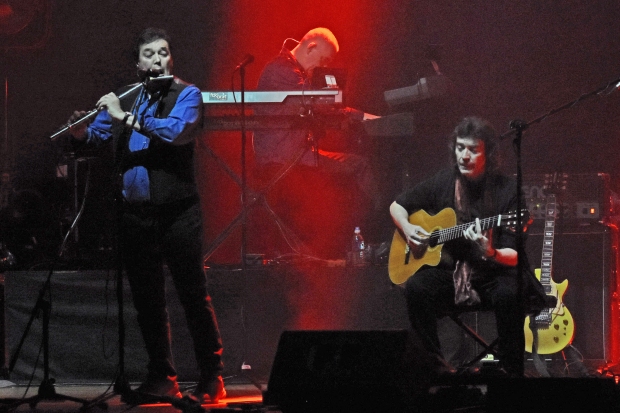 John Hackett returns to duet with Steve on the pretty, oriental The Red Flower of Tachai Blooms Everywhere. The tone switches and Clocks – The Angel of Mons paints a brutal image of the First World War battle, a golden opportunity for Blundell to introduce his skills with an extended exploration of his drum kit.

The eagerly-anticipated second set featured Selling England and a cheer greeted the first sight of Nad Sylvan, shrouded in mist and cutting a Dickensian figure, bedecked in crumpled topper and overcoat, as he delivered the iconic opening lines of Dancing With the Moonlit Knight. Filling Peter Gabriel’s shoes for Selling England is a huge ask but Sylvan, whose tones are not dissimilar to Gabriel’s, excelled. He created his own theatrical character, a chance to ‘stamp and shout’ as he made these songs his own. 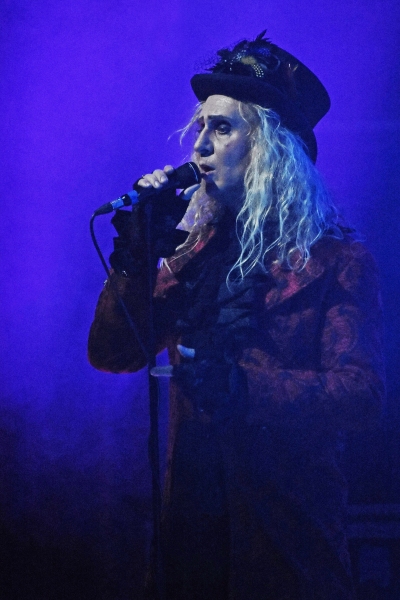 Sylvan remained in character for an extended I Know What I Like (In Your Wardrobe) which included a free-form jazz interlude from Rob Townsend’s sax of and a guitar solo from Hackett. There are so many opportunities within Selling England for the band to display their individual talents and Firth of Firth was the first for Roger King on keys, ahead of one of Hackett’s most celebrated solos.

Each track concluded to a round of rapturous applause. Selling England is Hackett’s favourite outing with Genesis and highly regarded among the fans, so it was a delight to hear three songs rarely, if ever, performed live. More Fool Me is a tender ballad, sensitively delivered by Sylvan with Hackett on acoustic guitar, while The Battle of Epping Forest was Genesis at their most playful, an epic tale of gangland rivalry with a host of unsavoury characters – Liquid Len, Bob the Nob, Harold Demure, etc. – for Sylvan to animate.

After The Ordeal, of Epping Forest, we are treated to what Hackett describes as a ‘pallet-cleanser’, a delightful instrumental and one of Hackett’s finest, yet understated moments. Selling England has so many obvious highlights, it is easy to overlook just how many guitar passages and solos link the whole, weaving their magic, almost anonymously, through the fabric of the album. Watching Hackett standing centre stage, leading this celebration of Genesis at their theatrical best, I was struck by the beauty of another sublime yet measured guitar solo. Back in Gabriel’s day Hackett would be seated, to the left, quietly delivering the goods almost unnoticed. His contribution to this treasured era of Genesis’s catalogue was immense, and to Selling England in particular. It is easy to see why he loves this album so, and it is fitting that he is now getting the recognition for his contribution and for keeping this music alive.

The Cinema Show has always been a live staple, again magnificently delivered by all, and time to mention the fantastic light show, a kaleidoscope of colour throughout. The Dickensian Sylvan returned for the finale, the pun-laden Aisle of Plenty, and a special treat: Deja Vu, rehearsed by the band but never completed and left off the album, “is something Pete brought to the band,” says Hackett, “but not finished until hundreds of years later! Nad sings this beautifully,” he added.

To close the evening, Dance On A Volcano was greeted with a standing ovation demanding the obligatory encore, the signature Los Endos embellished with passages from Hackett’s Myopia and Slogans. John Hackett rejoined the band on stage as they gathered to salute the audience, a truly memorable night. 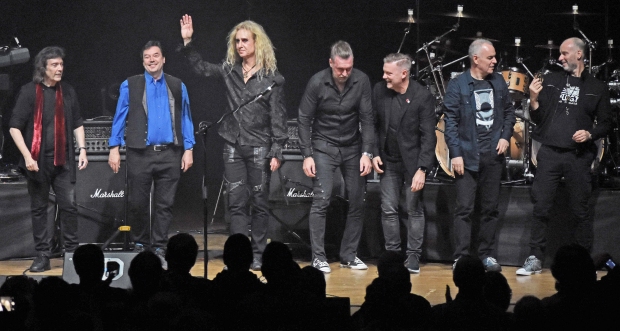 SETLIST
Every Day
Under the Eye of the Sun
Fallen Walls and Pedestals
Beasts of Our Time
The Virgin and the Gypsy
Tiger Moth
Spectral Mornings
The Red Flower of Tachai Blooms Everywhere
Clocks – Angel of Mons
Dancing With the Moonlit Knight
I Know What I Like (In Your Wardrobe)
Firth of Fifth
More Fool Me
The Battle of Epping Forest
After the Ordeal
The Cinema Show
Aisle of Plenty
Deja Vu
Dance On A Volcano
~ Encore:
Myopia / Los Endos / Slogans / Los Endos