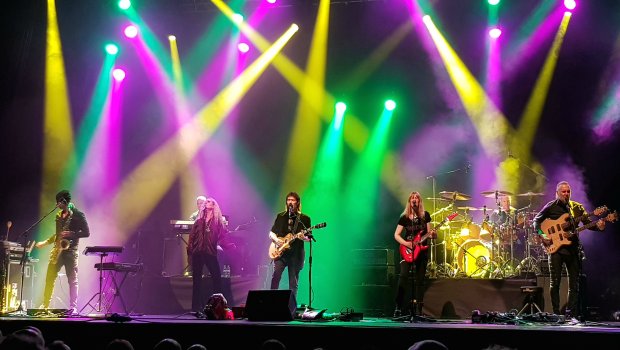 Postponed from 2020, this tour continues the regular offerings from Steve Hackett, the ‘Genesis Revisited’ series of gigs also serving to showcase his most recent albums plus other post-Genesis material.

Currently celebrating the Genesis live double album Seconds Out, originally released in 1977, the evening’s first section precedes that, consisting of a choice selection from Steve’s output since leaving Genesis, also in 1977 – now 44 years ago.

Starting off with Clocks – The Angel of Mons, from the album Spectral Mornings, with the band and Mr. Hackett entering gradually amid audience claps and cheers. During Roger King’s anticipatory ‘sit-up-and-listen’ opening keyboard chords, the striking rhythmic ticking and clicking sounds of the backing track reflected the excited tension within the auditorium, until the chimes are accompanied by a shouted counting from some eager members of the audience who know what’s coming, and with a “ONE…TWO…THREE…FOUR” Craig Blundell’s powerful drum roll blasts in on the up beat heralding the off! The band’s collective foot firmly on the throttle, Mr. H’s searing guitar line cuts through and this stunning track makes for an absolutely terrific opener! 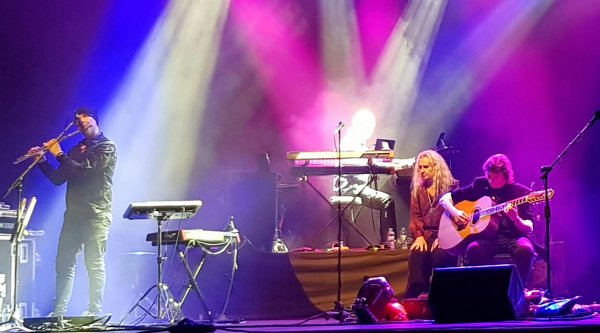 Looking suitably pleased with the reception from the crowd as the ensuing applause and whistles die down, Hackett approaches the mic and formally introduces the evening: “Welcome to Monday night at the London Palladium!” which raises an extensive laugh within the crowd who, mainly of a certain age, recognise the reference to the erstwhile TV show of similar name. “It’s great to be finally doing this – to be allowed out!” he continues, referring to the COVID 19 pandemic and the previous year’s curtailment of part of his Selling England By The Pound/40 years of Spectral Mornings world tour.

He introduces special guest Amanda Lehmann on additional guitar duties, and then it’s straight into the new album Surrender of Silence with Held in the Shadows. Jonas Reingold impresses on double-necked guitar, his deep bass lines giving gravity to the rhythmic passages and intense guitar riffs which incorporate a southern rock vibe, along with Rob Townsend’s saxophone in harmony with the guitar, plus interspersing light lyrical vocal lines from SH who commandingly takes the lead vocal here, Nad Sylvan gliding on stage, as if on wheels, to join him. Amanda, Rob, and Jonas join Nad on backing and warm embracing harmony vocals while a bit of diddling and shredding from SH creates free flowing movement aplenty.

SH introduces Every Day, also from Spectral Mornings, sharing musical info that Amanda would likely be tracking his every move, note for note. Jonas swaps the double-neck for a standard bass and he and Roger strike into the majestic and pounding keyboard/bass-led opening. Lush harmony lines from the five singers for the catchy vocal/chorus alternate with the by turns soaring and intricate guitar lines, Amanda’s voice particularly rich and sweet blending with the male voices. Rob’s twirly soprano sax playing is in alignment with the guitar lines and we also hear clearly a lovely melodic bass line, Rob also on additional shaker and percussion which serves to fill the sound.

Next up, another new offering from Surrender of Silence, The Devil’s Cathedral, heralded by a Gothic horror organ opening over which a swirling sax improvisation creates palpable tension. Further formidable organ swells lead into a full-bodied rock beat and Nad’s storytelling vocal plus dread-imbued guitar riffs. Dramatic dissonance creates even more excitement as the faster section, with Nad’s impassioned delivery and Steve’s intense shredding, cuts in and drives us onwards as if this devil himself is on a careering night caper across the skies!

With Amanda’s presence, one can be pretty sure that the full vocal version of The Voyage of the Acolyte’s Shadow of the Hierophant will be presented at some point, and sure enough, we are not disappointed. To great audience cheers, Steve’s opening soaring and melancholic guitar makes way for Amanda’s lush and sweet, clear as a bell upper register which rings out beautifully, her tones perfectly suiting the delicious melody, and, with great complementary effect, Rob’s folksy flute accompaniment weaving in, out, and around. The chimes herald the approach of the repeated ever-building and climbing theme, as if with heavy hearts we tread a well-worn path, guided together as one, yearning, striving forcefully onwards to the emotional summit of this formidable and monumental piece. Smoke effects billow out across the stage as the goose-bump inducing keys resonate, giving ever more gravitas to the theme, the stunning lights bow and rise majestically in accompaniment, lighting the way up the virtual mountain as the glorious sound builds ever more. 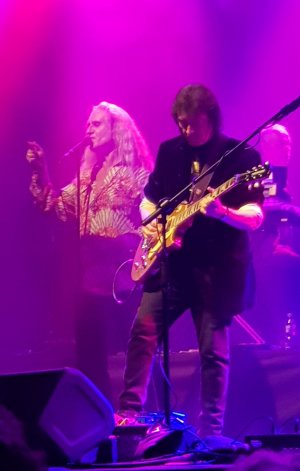 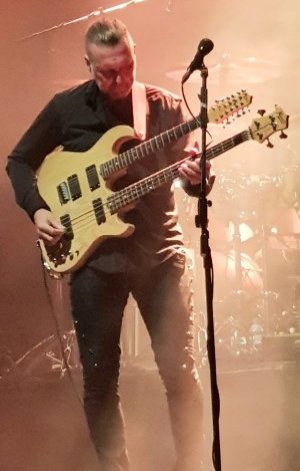 After the interval, some members of the audience can be heard humorously heckling as the band enters, with light-hearted cries of “Freebird!”, “Albatross!”, and even “Go Your Own Way!”. Steve, vaguely amused, cuts it with an abrupt start of Squonk to begin the main attraction of the evening, the whole of Seconds Out, with Nad in full voice, but visibly holding back from the mic to enable appropriate crescendos as he leans forward. The main melody line here is taken by Rob’s commanding sax, Craig’s punchy playing propelling us all along. 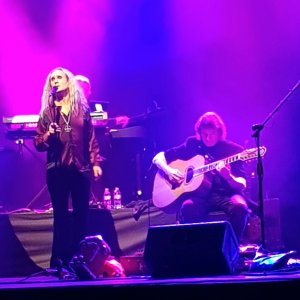 A seat is provided for Steve for The Carpet Crawl, as originally listed on the 1977 album and as on The Lamb Lies Down on Broadway, nowadays more often known as The Carpet Crawlers. Nad’s rich unrestrained lower register is perfectly suited here, Jonas adding backing to accompany Steve’s sustained buzz-saw guitar part, which provides a certain edge I’d not experienced before, the melodic basslines gently underpinning the rolling nature of the song, tinkling keys flowing water-like underneath.

Next up, Robbery, Assault and Battery, with Nad’s narrator-style singing and the band at a formidable lick, ploughing us through at top speed, but including a nice opportunity for Roger’s highlighted solo in the middle. Hardly a breath before Afterglow proceeds forth with its melodic majesty, Jonas’ bass and vocals elevating the song to great heights, and Rob on supplementary keys raises the glory of this beautiful song even further.

Swiftly on to Firth of Fifth, Roger’s by turn intense then delicate piano opening formidably leading to Nad’s impassioned vocal, as Steve joins in before his soaring guitar swirls lead to the main instrumental section of Rob’s resonant sax playing the main theme. Jonas’ tumbling bass line provides a solid foundation which allows Roger to show off his skills further, Steve and Rob leading the audience in the traditional hand-clap section. With impressive rolls and fills, Craig accompanies Steve’s glorious guitar taking up the theme, and we’re on his swooping journey before landing home again with cymbal crashes heralding Nad’s final comforting verse.

A chaos of swirling keys, guitar scrapes, drum flits and percussion all akimbo starts I Know What I Like (In Your Wardrobe), taken at a faster pace than expected, Nad having fun varying the chorus melody and rhythm. A funky jazzy syncopated section allows Rob’s sax to take centre stage while Craig thrashes and crashes around, Steve standing aside, nodding along benignly. Nad delivers the final verse at a bounce, as if leaning towards a scat, Hackett’s guitar soaring out again, weaving into a delightful duet with saxophone and paving the way for a solo on soprano whistle that adds a jaunty edge.

Twinkling keys and shreddy, squeaky guitar runs introduce The Lamb Lies Down on Broadway, with Nad in full evocative vocal mode, the band at full pelt, with the penetrative bassline from Reingold at the forefront. The tinkly start of The Musical Box inspired many a cheer from the audience; Nad’s now contrasting sensitive and delicate vocals alongside Steve’s clear, crisp, high guitar lines, expanding into the Mediterranean infused snippet, Jonas turning to strumming his guitar to keep it all rousingly fresh as it glides along with soprano whistle action from Rob Townsend. 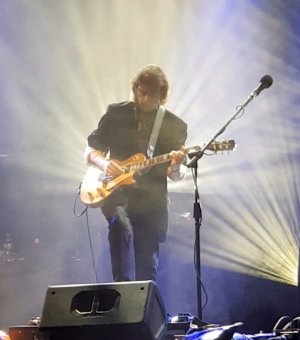 For Supper’s Ready, Hackett’s semi-acoustic sets the scene with Nad’s character-filled narrative style encouraging the audience to join in with the repeated “Hello babe… don’t you know our love is true” chorus, plus other later notable spots, much to everyone’s amusement. The lighting effects highlight Steve and Rob, emphasising the venue’s fantastic sound quality as the clarity of Roger’s keys duet with Nad and Steve’s uplifting parts. It drapes the stage in glorious red and purple, particularly effective for the rousing stompy section which provides the welcome head-banging aspect for the audience in this veritable epic.

Jonas is back to his double-neck for Cinema Show/Aisle of Plenty, as Rob displays yet more prowess, his soprano sax taking the theme for which Nad leaves the stage and Steve stands aside to allow the solo to take the centre. This leads to Roger King’s expansive keyboard section incorporating, for me, the most uplifting goose-bump inducing and joyeous playing of the whole night! The lights fan out in sequence, hovering over the stage and seemingly cascading over the band’s heads to highlight the drama.

The encore is – as anticipated – the formidable and driving Dance on A Volcano, which affords Craig Blundell a punchy solo, the main buzz guitar effect from Hackett filling the sound with intense vibrato, and the frenetic mid-section propelling us to new exaltations!

Before the finale that we all knew would be Los Endos, my ears pricked up, as we had been promised a surprise within the press release, and here it came at last: Volcano turned into a section from the hugely complex Slogans from Steve’s Defector album, 2020 having been the 40th anniversary of its release. Not too late in the evening for Steve to wow us with a breathtaking display of shredding guitar! Finally reaching Los Endos, as Slogans ends with the most natural but appropriately menacing, scrapey and chaotic coda that allows the band to segue straight into the glorious pounding theme, Nad Sylvan striding on once more for the final vocals as the whole band crescendo into the final chord to a huge standing ovation, richly deserved.

A most moving evening of some of the most euphoric emotion-inducing and timeless music on the planet. It made me, at least, so truly grateful for the talent up there on the stage, and the welcome opportunities to experience it first hand. 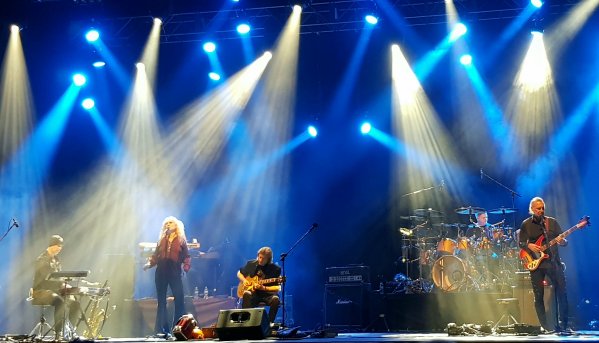 [Many thanks to Sharon Chevin at The Publicity Connection for her assistance. Photos by Rosamund Tomlins.]

Seconds Out:
– Squonk
– The Carpet Crawl(ers)
– Robbery, Assault & Battery
– Afterglow
– Firth of Fifth
– I Know What I Like (In Your Wardrobe)
– The Lamb Lies Down on Broadway
– The Musical Box (full version)
– Supper’s Ready
– The Cinema Show / Aisle of Plenty
~ Encore:
Dance on a Volcano / Slogans / Los Endos

Steve Hackett – Under A Mediterranean Sky →