A concert of two sets.

In the first part of the show, Steve played tracks from his latest album, The Night Siren, which he informed us had been well received and had even briefly appeared in the U.K. Album Charts. Steve then spoke about Brexit (he appears to be Pro EU) and vividly remembered the time before open border access. He told us that 100 years ago his family moved from Poland to the U.K. because of religious persecution and so he is very appreciative of Britain for receiving them openly.

I have to say that I did feel the band struggled to find its feet and groove initially. The opener Every Day was very strong, but then a lack of introductions between pieces did not enhance the music but actually detracted from what was being played as many seemed unfamiliar with the newer songs on offer. I felt that the sound mix was a little unbalanced with the guitar and vocals being a bit low in the mix for this part of the set. That said, Serpentine Song was magnificent with Steve recalling his father selling his paintings at Hyde Park on a Sunday morning. Shadow of the Hierophant from his first solo album, Voyage of the Acolyte was very well received and closed the first set in a very satisfying manner.

Incidentally, the guitar he used for the first set used to belong to Gary Moore and is a bit more mid-range in tone which is why he used his regular Fernandes for the Genesis set as it has a more trebly sound. 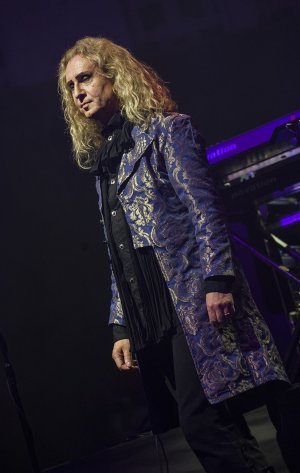 Set two was the main attraction for many I’m sure, especially with Steve revisiting much of the Genesis album Wind and Wuthering to celebrate it being forty years old this year. With the other members of Genesis being unwilling to mark this occasion in any way, Steve has decided to play the majority of it for us, opening with a strident Eleventh Earl of Mar which introduced Nad Sylvan again to cover these songs in his own unique manner. Nad is blessed with a voice that does justice to both the Gabriel and the Collins eras with conviction, his voice could have been louder in the mix though – or perhaps my hearing is getting worse after all! This was followed by an excellent version of the epic One for the Vine, Roger King covering Tony Banks’ keyboard parts with great finesse with the rest of the band on fine form throughout too. Then came Blood on the Rooftops with Steve opening and playing the whole song on acoustic guitar. Drummer Gary O’Toole sang the lead vocal on this one admirably, which was then followed by a frenzied …In That Quiet Earth before the stately Afterglow. We then had a slight diversion with Dance on a Volcano from Trick of the Tail before Steve’s version of Inside and Out, a song recorded for but ultimately left off Wind and Wuthering. Steve told us that he is not the only Genesis member who felt it belonged on the album. 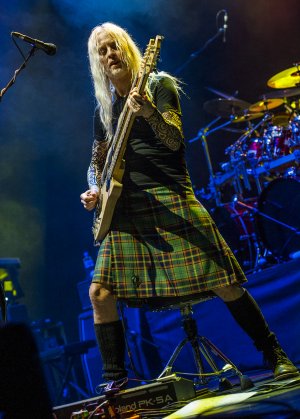 This whole segment was very well received and showed just how excellent Steve and his band are. Then it’s into the home straight and what came next was the best version of Firth of Fifth I have ever heard Steve play, it was simply magnificent! Powerful, stirring and strong with Nick Beggs playing rhythm and bass pedals, Rob Townsend’s poignant flute alongside Roger King’s elegant piano break before that staggering guitar emerged out of the mix soared upwards so emotionally laden yet sublime that it brought a lump to the throat, then Nad brought this classic song to its conclusion. Before we’d had time to take a breath, The Musical Box with its treasures is opened for us to enjoy anew, another epic song with Steve’s guitar shaking the melody like a Rottweiler.

That’s the end of the main set and off the band troop to huge applause before returning for Slogans from the Defector album, the show ending with another fine version of Los Endos. This was a superb show and, sound issues aside in the opening set, a triumph for Steve and his band. Not to be missed. 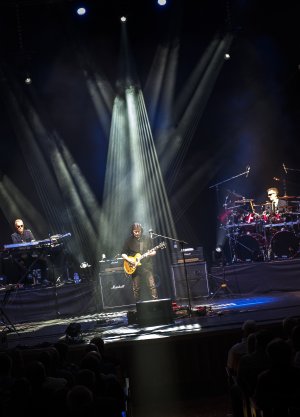 While Steve Hackett may have visited the majority of concert venues in Manchester in his time, when his bus heads off down the M62 to Liverpool after a Friday night show in Manchester, there’s only one destination for which he could possibly be heading. Actually he had a day off and visited Wuthering Heights in Bronte country for the obvious reasons…however…

The expansive Philharmonic Hall is a bit of a Hackett stronghold, finally becoming immortalised by having the honour of being the location for his Total Experience: Live In Liverpool release from the last round of gigs. The current Hackett experience having been filmed earlier on the tour in Birmingham, the pressure of delivering for the cameras was off.

It’s amazing to think that it’s forty years since he left Genesis, yet he carries the constant tag of ‘ex-Genesis guitarist’ (and no doubt like the other ex-members is similarly plagued by questions about reformations). The current tour follows the pattern set back in 2013 with ‘Genesis Revisited’ and now sees him combining his Genesis legacy (which has grown wheels and if the demand is there, why not?) with a considerably more extensive solo career. And to his credit he can’t be accused of doing anything less than a thorough job with the Genesis material, not just knocking out a couple of the ‘hits’ a la The Mechanics. This year sees the chance to celebrate Wind & Wuthering’s fortieth, but first there were almost forty years of solo Hackett to condense into an opening hour set.

The strength of his own material might conceivably have stood in the shadow in the past five years as Steve has toyed with the Genesis legacy. Shame, as with new material in Wolflight and current album The Night Siren in particular, he has an active and creative on-going solo career. Not one to stick to the tried and trusted though, although no-one would complain at Every Day getting the opening slot, he has once again juggled his own material in the set so there’s always something new or different to enjoy. Aside from cherry picking a trio of new cuts, of which El Nino sat as a turbulent companion to The Steppes’, this tour it has been the contrast in the resurrection of Rise Again from the suitably named Darktown album and the elegant, almost whimsical Serpentine Song, its personal nature, harmonies and restrained playing made it an improbable highlight of the first hour, along with the barnstorming version of Shadow Of The Hierophant that closed out the set in climactic fashion. 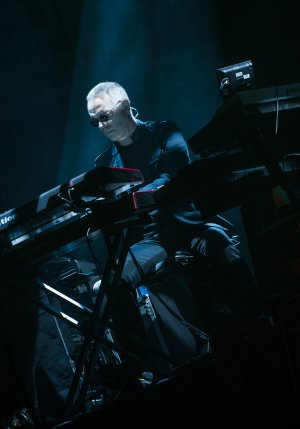 The decision to celebrate the fortieth anniversary of Wind & Wuthering (“not all of it – just the stuff that counts!”) was possibly a universally popular one, especially when it was topped off with the inclusion of Inside & Out from the outtakes that made it onto Spot The Pigeon (“a couple of crap tracks but this was a good one…”). It also saw the welcome appearance of the cult hero that is Nad Sylvan, his enigmatic ‘Vampirate’ onstage character completing the set of musicians who have become set as ‘The Hackett Band’ over the past decade or so. The changing bass stool might have seen Lee Pomeroy and Roine Stolt, but Nick Beggs is now back in residence, providing both visual foil and master musical technician. Quite how Gary O’Toole manages to drum in a suit and tie beggars belief, while on Hackett’s right – our left – long term musical partner Roger King remains in a sedate Banks-ian repose allowing Rob Townsend to add all manner to the musical mix aside from his wind and whistle contributions.

With Dance On A Volcano literally heating up proceedings, the killer punch combo of Firth Of Fifth and The Musical Box were enough to have Nick on his knees at the end (not for the first time in the evening), helped up by his tech.

Beggs may have been down, but the Liverpool crowd were moved to its feet, hailing what John Erskine, the 11th Earl of Mar, might have termed the conquering heroes. 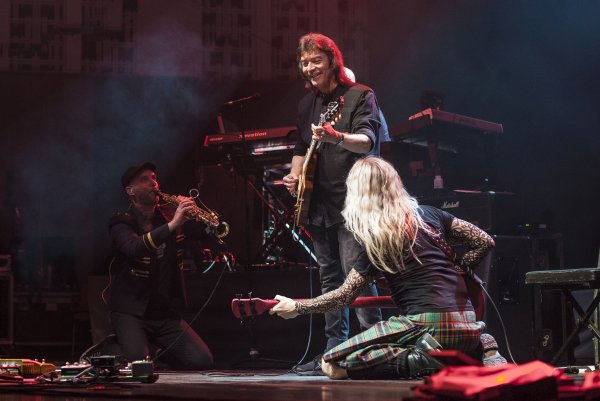 [All photos by Mike Ainscoe and taken at the Liverpool show. You can read John Wenlock-Smith‘s recent interview with Steve Hackett HERE.]

SETLIST
Set 1 – Classic Hackett
Every Day
El Nino
The Steppes
In the Skeleton Gallery
Behind the Smoke
Serpentine Song
Ride Again
The Shadow of the Hierophant
Set 2 – Genesis Revisited Wind & Wuthering 40th Anniversary
Eleventh Earl of Mar
One for the Vine
Blood on the Rooftops
…In That Quiet Earth
Afterglow
Dance on a Volcano
Inside and Out
Firth of Fifth
The Musical Box
~ Encore:
Slogans
Los Endos