An evening of delight and surprises!

The venue, although tucked away and a bit further to walk within Chelsea football club grounds than one might expect, works really well for gigs; the stage is a good size for a band, and a good height for the audience to have a good view while feeling connected to the musicians. The loos are surprisingly luxurious, and this evening the light show backdrop was employed to stunning and humorous effect.

With such an extensive back catalogue of unique music, there’s a huge number of tracks to choose from for each Focus tour, along with promoting the new and recent albums. Some album tracks work better than others live, and die-hard Focus fans can be forgiven for the occasional whinge that only the usual suspects are paraded, and that there’s a lack of variety at gigs, particularly in the hour-long festival sets. There are many good reasons this strategy is adopted, but with a 2-hour plus set this evening, there should have been no complaints!

In any case, there’s something nicely settling and synergistic about the ever-present introductory Focus 1, with its harmonious chords, and lyrics too – a rarity since the first album after which their promoter told them they should not sing any more (!), and so Sir Thijs Van Leer hit upon yodelling instead! They are a timely reminder: “Focus yourself on the love you owe mankind…”, ahead of the swelling Hammond chords and lilting melody from the guitar.

After going seamlessly straight into the folksy House of the King, widely known for being the theme tune to a couple of U.K. TV shows, with its sometimes breathy flute tune, the multi-faceted Eruption was up next, revealing the supreme talent within the band, via its classical origin and themes, complexity of rhythms, frenetic drum sequences from Pierre van der Linden, and soaring guitar lines from Menno Gootjes – his new guitar providing a slightly different and brighter twang than his erstwhile favourite. In the fervent and convoluted jazzy improv section the band were completely in the zone together, and the blues/scat bit got everyone in the collective genial mood – this is where Sir Thijs traditionally abandons the haven of his trusty Hammond, and emerges armed with flute to front the band with a delightful call and response session with the audience.

Throughout, Thijs displayed a warm regard for the audience, and showered his fellow musicians with respect and benevolence, gazing in admiration, and introducing them by name after every point where their individual playing stood out, and he was very much at ease providing a little banter to introduce or comment on most of the numbers. 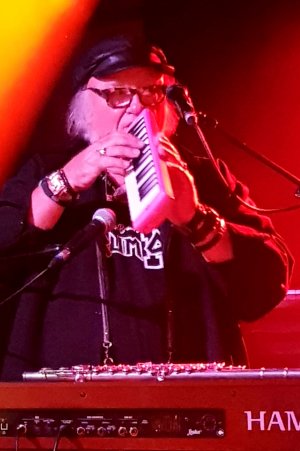 After the three standards, satisfying the inevitable worshipful nostalgia, it was time to play with the repertoire, weaving newer tracks among other classics. From the current album release, Focus 11, we got the beautiful Winnie, which Menno wrote for his daughter, the intense emotion most evident, and the contrasting Who’s Calling, which runs at a jolly jaunty speed. From Mother Focus (aka Focus 5) we got the serene Focus 4, and from Focus 10, the terrific, driving, rocking-out All Hens On Deck, which was introduced as uniting all of us in the room, as it’s a pun on the phrase ‘all hands on deck’.

Sylvia was presented among these via its habitual blues funk beginning for live shows, with a dash of humour as Thijs urged the audience to clap along with his various one-handed gestures as he played the keyboard riff with his other – slapping his cheeks and the top of his head. It was a delightful surprise for those in the audience not in the know when the recognisable opening chords were finally played, and a great cheer went up!

Then, completely unexpected, Focus 6! I was gobsmacked! I knew it must exist as all the other ‘Focus’ tracks numbered 1 to 11 are out there, but I never expected to hear it played live – it’s not even on any U.K. released album, as far as I can tell. I need to hear this again!

I knew Le Tango was a probability as a pink plastic Melodica was in evidence atop the Hammond. As its haunting tones rang out while Udo Pannekeet’s bass lines crept in and Menno’s off-beat staccato chords got us in a reggae groove, a bit of audience entertainment ensued for those of us down the front with “Excuse me, excuse me!” from none other than Thijs’ first wife Rosalie (Peters) wending her way to front centre. She wrote the lyrics, only sung on the albums in various versions – the most recent being Focus 10. Thijs referenced her by name afterwards, thanking her for her participation and enthusiastic dancing!

It’s great that the newer and previously rarely performed pieces are given a place at longer gigs. The band like to vary the set a little from gig to gig to keep things fresh for themselves, and as they tour a lot and fans may take in more than one gig, it’s win-win all round.

The delicate Cathedral de Strasbourg with its depiction of bells by Menno’s guitar was followed by the rumbustious Harem Scarem. Rarely are those performed without each other, since originally appearing together on Focus 4: The Hamburger Concerto. Time for solo opportunities for the guitarists during Harem Scarem, where Udo got to show off his jazzy 6-string prowess and Menno, already commanding the stage with effortless fills and trills everywhere possible during the theme, went for it full-pelt rock, free-range!

No drum solo for Pierre here, as has been the norm – it was saved for the next piece; from Thijs’ opening delicate flute solo, regulars knew what was coming – the iconic Hocus Pocus! Thijs was hilarious with his yodelling bits, different each time, manic, scattish, extended with a seemingly everlasting breath, then with over-blown flute, urging the audience to join with Menno as his guitar stated the rising scale notes, until we wailed at the tops of our voices and then head-banged to the main riff! Pierre got to wow us with his solo, for a man of his years showing incredible strength and resilience at the end of a 2-hour, for him, non-stop set! 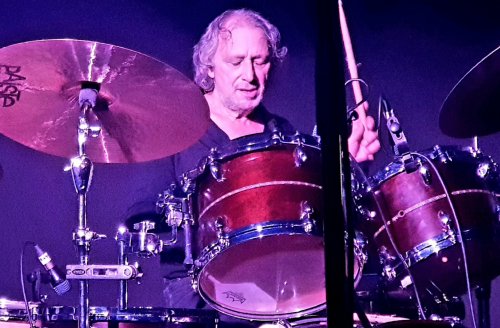 With his fingers resting on a succession of organ chords, poised like a coiled spring dying to be released, Thijs sang the official band introductions and thanks, including sound engineer Giraldo – the amazing Geert Sheijgrond, who always performs miracles of clarity with any tricky venue – and affable merchandise seller ‘Marcello’, Marcel Castro, and then they all resolved the tension with the final bash at the riff!

It was 11 o’clock and we thought it was all over, as the signs outside and online clearly stated ‘Curfew 11pm’, but after a very brief pause, Thijs almost bounded back on stage announcing that by request they’d do Focus 2, which is a fabulous way to end a Focus gig, with its theme that suggests a concluding coda; it’s a lovely winding-down after the all-out bonkersness of Hocus Pocus.

Speaking to the band afterwards, they felt that of all the gigs so far on this current long tour, this one felt like one of their best, that it all gelled perfectly, feeling at one with the audience, and this was echoed by the ever-present Marcel who has a unique perspective from his merch table.

I couldn’t fault a moment; it was a terrific gig, with something from almost every era of Focus.