Not a shock at all really, nor can I say that I am surprised at the quality of the material. Some might say it’s routine, but I find the nature of the performances, and in most cases here the paring down to simplest of arrangements, is great. You can hear from this how (no pun) Steve and his music contribute to the final sound in the progressive rock environment.

The trio combines Steve Howe’s guitars with Dylan Howe on drums and Ross Stanley on keyboards. This, I understand, is their second album following on from 2008’s The Haunted Melody. I have always had a fondness for jazz since my introduction to it in my mid-twenties, and for someone looking for a broad-spectrum introduction, I would happily recommend this. With elements of tradition as well as some interesting contemporary takes, there is some great music here.

Hiatus, the first track and possibly a statement, is a smooth introduction to the album, contrasting Spanish/classical guitar with some laid-back keys and a soft brushed back-beat. Whilst jazz structured, it would equally be at home as good quality incidental music. Expectations of long intricate explorations of musical pathways should be suspended as the longest track here is just over 6-minutes. But for all that, or not, I find myself closing my eyes and losing myself in the tunes. Hiatus also has some of those key stylings from the more famous rock band Mr Howe appears with from time to time.

Left to Chance is that longest track. A simple pattern of notes that builds into a construction of alternating guitar and organ passages, circling around each other, almost a jam session. Taking turns to lead on the compositions main theme. Despite a potentially repetitious nature the work ambles from beginning to end, never outstaying its welcome.

Fair Weather Friend appears to your listener to be variations around a nursery rhyme theme; I have recollections of a variation around Three Blind Mice, Oscar Petersen or Dave Brubeck, but probably someone completely different, seemingly simple but a really nice piece and for me at least evoking a few memories.

Zodiac is refreshingly easy to listen to, the main focus being the organ with embellishments from guitar. My cop-out way to describe this album is as an introduction for young people or people who say that they do not like Jazz.

The emphasis changes. Gilded Splinter sees a variety of melodies played in a round over each other, building into a verse/chorus-like structure without words; it’s a lovely piece of music that to some extent is crying out for someone to put words to it. Who knows, once heard maybe that will happen. I love the way in which the instruments play against each other whilst still retaining a harmony.

Showdown has familiar elements, I think I’ve heard this before despite being new, my closest approximation being the theme to the Parkinson chat show. Not exactly, but something like that. Another tip of the tongue, fingertip moment. Whatever the inspiration it is, as are all on here, refined and beautifully executed.

Pizzicato strings begin, weaving, developing as a picture grows, the opening bars of Missing Link is relaxed listening, and I have had it on in the background when typing many other things as well as this review. The music lends itself to that varying focus, but still delivers an enjoyable experience.

The final three tracks continue to deliver that quality listening experience, Missing Link being by far my favourite from an album of delights, whether I sit and listen, or it’s on while I read a book or draw, it is a good companion. All of these last three tracks fall into the progressive jazz genre, that is merely for placement as the musical fusion that the trio have has no real boundaries, the blended acoustic and electric fusion is seamless.

New Frontier brings the combination of amplified and acoustic to bear in a beautiful album, not prog, more progressive jazz, but even with the jazz label, it’s difficult to pin down. It will not be sat in the top five end of 2019 selection; it does not fit that narrow progressive pathway, but it will be one of my favourites. Where does it belong? If you are a non-jazz aficionado, then this may be the album to convert you. If you need an introduction to jazz, this album will ease you in nicely. Already a fan, then you will enjoy every moment. A very valuable addition to lovers of a broad range of music.

Hi Steve, thank you for talking to The Progressive Aspect about New Frontier, so I suppose my first question is why New Frontier? With two albums previously – Mostly Haunted and the live recording Travelling, it might strike some as a strange choice of title.

Steve Howe: Mostly Haunted and the live album were very much influenced by the music we/I grew up with, such as Kenny Burrell or Chet Atkins. New Frontier is a departure from that as all the compositions were written with a more contemporary cross-genre feel.

Yes, I listened to the two earlier albums and there is much more of a traditional jazz feel than New Frontier, it seems to bring in elements from the rock side of your playing as well as classical, Spanish, your solo material and more.

SH: New Frontier is much more collaborative, we wanted to produce something that was progressive and not stand still, though there are still influences like Chet Atkins.

There are three tracks from working with Bill Bruford on the album, was it easy to write with Bill after many years?

SH: The pieces from Bill are things that he has had for a number of years, we took them and developed them into the tracks on the album. Working with Bill was good. When Bill was with Yes, we were at our most innovative, particularly around the Fragile and Close to the Edge period.

Dylan is a renowned musician in the Jazz world in his own right, without the attachment of the Steve Howe name; I suppose when playing together there’s no parental control involved?

SH: I’ve been playing with Dylan since 1993 and we work very well together, our relationship is almost instinctive in that we understand what each other is trying to achieve.

How important are Dylan and Ross to the overall sound of the Trio?

SH: We could have chosen another name but we went with the Steve Howe Trio, but the band itself it’s very much a collaborative effort.

New Frontier seems to me to be light-years from Haunted Melody, it reminds me of the jazz that sits in my music library, it combines more contemporary elements. Was this a conscious decision?

SH: New Frontier reflects the period of time between Haunted Melody and the current album where Melody, it’s about the music that we grew up listening to, the New Frontier is more contemporary, progressive and closer in style to artists like Roland Kirk.

Which track gives you the most pleasure from New Frontier?

SH: Very much a transient question, all the music on the album I enjoy, but if I had to choose it’s probably between Zodiac Syncopation and Western Sun, the two pieces both grew in the recordings and I’m very satisfied with the end results.

I asked Steve about music, what would he listen to when he’s not practising or composing for a variety of the genres in which you performs, his answer: it’s very much a broad canvas, as he has a very general love of music. The way in which he talks openly about it, the love shines through. In terms of new bands, he readily encourages young musicians, in particular, the acts that provide support.

Time was very brief, as a busy musician fits in the many interviews associated with a new release, so I was forced to cut my questions back. I asked him which of his acoustic guitars, as this is very apparent on New Frontier, is his favourite to play. He currently favours the Martin MC38 in a Steve Howe signature model.

The time with Steve talking about New Frontier was an absolute pleasure, I hope to have more time to speak to him in future.

I can thoroughly recommend New Frontier, both in terms of an entry-level jazz album and as a reflection on how contemporary and progressive music and jazz music can combine together to make something that is truly beautiful. I hope you take the opportunity to listen. 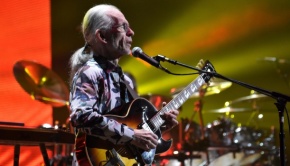 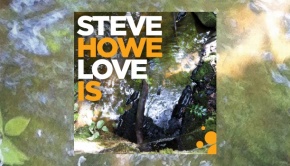