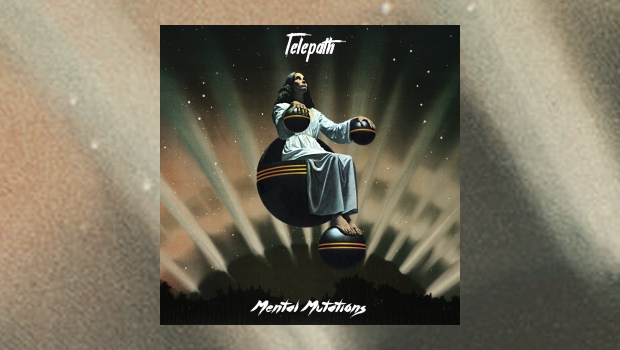 Norwegian-Israeli multi-instrumentalist, songwriter, engineer and producer Jacob Holm-Lupo is well known for his work with White Willow and The Opium Cartel, as well as his remastering work for other artists. Telepath can be regarded as a bit of a pastime for him, a ‘playground’ that takes him away from his regular work. When I noticed that Mental Mutations was inspired by White Willow’s Storm Season my interest was piqued as I have always held that album in high regard and was keen to hear the results.

The background story to the creation of this album is an interesting one; according to Jacob it started during a lengthy visit from his family in the spring. As a bit of an introvert, he would sneak away from the festivities at night to his studio. Quickly, it appeared, three weeks had passed and he had written, recorded and mixed an album. It was never originally intended to be released, so the process was enjoyable, full of experimentation and fun. Jacob played all instruments but made a great effort to create a band feel, using first takes with no corrections, and I think that he has achieved the feel that he was after, the playing is of a high standard and, to my ears, there are no obvious, as Jacob puts it, “bum notes or missed beats”.

The album comes in at a healthy forty-two minutes, with ten tracks which are all on the shorter side, excepting two of around seven and a half minutes in length. Jacob has put a lot of interesting sounds into these songs making this a very interesting listen. So, after all that information, is this album any good? Well in my opinion, yes it is.

Jacob has mixed a ’70s hard rock feel with touches of doom. The Dark Blood of Fate demonstrates the White Willow Storm Season feel during the opening couple of minutes, before developing a heavier, doomy feel, only lightened by stabs of keyboards. Things change again with a lighter section before the heavier, sinister feel begins to creep back in to try and assert itself while the keyboards maintain their lighter feel. This continues to the end of the track with neither achieving dominance.

Lullaby for Deep Waters is another that gets into Storm Season territory, a short but interesting track. The album is mainly instrumental, but there are vocals on a single track, No More Wishes. This is one of the longer ones with keyboards featured prominently, in particular with a great solo with a ’70s prog feel which begins around five minutes in.

On Race to the Wasteland, things get off to a more forceful, heavier start with lighter touches again provided by the keyboards. The mid-section changes the mood before returning to its heavier roots. It also includes a great guitar solo.

Overall, this a very enjoyable listening experience. It is clear that Jacob has put a lot of care and effort into this project, one that I believe he should be proud of. If you are a fan of Jacob’s work then this is something you will need to investigate, if you already have not. But generally, give it a listen, I think it may well be worth your time.