Tony: A weekend of progressive music at a bargain price, great venue, very well organised by Steve Gould, The Progmeister, who even managed to arrange some quality street food (pizza and curry) and a wristband discount at a local pub – to the Hope & Anchor; your beer was good, and your food delicious!

So, entering the venue, a community run Civic Centre, the noise is already beginning, thankfully the bands will start soon. Nicely set out with seats to the front, room for wheelchairs (access was easy), some tables and a bar area where the chats that inevitably happen did not, in my opinion, encroach on the main auditorium. And for those who pay good money to chat over the bands, this message available in poster and t-shirt form: 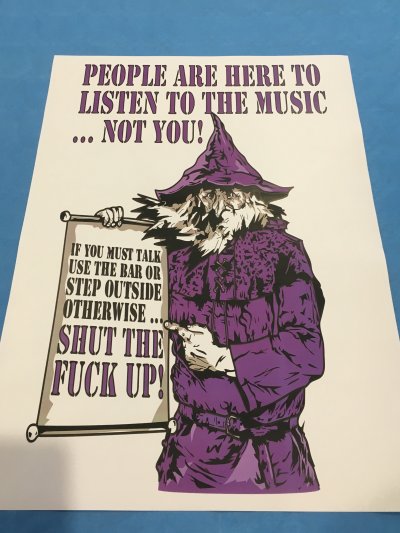 So, if you’re sitting comfortably, let us begin with…

Tony: A young band – probably not yet seen a razor! – but they were wonderful. So many influences woven into their music, predominantly the whole of Bowie’s back catalogue with elements of many others – Hendrix, King Crimson. Loved it. And all over far too soon. As an opening act, they nailed it. The songs were relatively short, punchy, and delivered with class and really, these boys could go far. 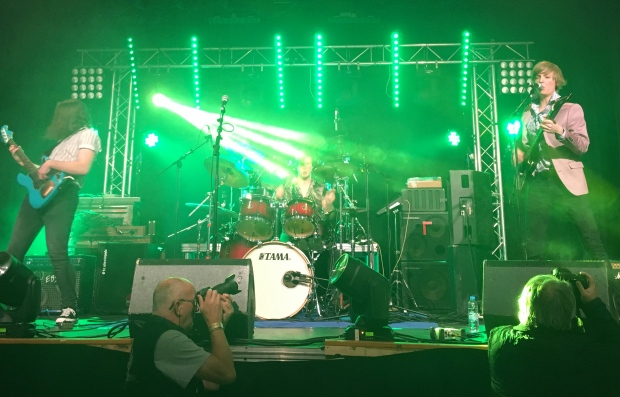 Tony: I do love The Gift, the music has become quite familiar and I am happy to listen as they change and develop with no loss of interest. Tonight, without guitarist Leroy James, they adjust and give us another tight set. Whether five or six, they can dazzle – factor 20 on as the lights reflect off Mike Morton’s jacket and shiny shoes. The set is a mix of old and new, with breaks as the band refresh whilst Mike and Gabrielle Baldocci perform The Tallest Tree, a heartfelt reflection on bereavement that always brings a lump to my throat. Then, an instrumental sojourn/introduction as Mike hops off to top up the tan.

I do love the old material, the long songs, the classically progressive, but this is evolution and the new material from the album to be released on 23rd June is shorter, punchier but I believe still having Prog DNA at its heart. It should win them new fans, and hopefully more gigs, shiny shoes and jackets don’t come cheap you know.

Jokes aside, The Gift get better with every performance, the warmth that exudes from the stage cannot help but fill the audience with love. Next up Focus, they as you will see were great, but for me the stars of Friday night at The Civic were The Gift. David Lloyd is a phenomenal guitarist, much admired and encourages me to learn another chord (that’ll be three for me), Stef Dickers is subtly brill, Neil “no buttons” Hayman excellent and Gabrielle is La gioia che è la vita. (hoping that isn’t something terrible about his mother).

Leo: An energetic and entertaining show from charismatic front man Mike Morton and his bandmates. Opening with a full-on excerpt from their first album Awake and Dreaming showed The Gift in a mood to rock. New songs We are Connected, with insights into the pervasive influence of social media, and The Finest Hour indicates a band wanting to touch on modern, relevant subjects with a satirical edge. They bode well for the new album in June. The Gift successfully got the crowd on their feet with their harder edged sound, but they could also touch hearts with The Tallest Tree. They can still ‘Prog out’ with their classic The Willows and notable pianist Gabriele Baldocci had great fun on his flamboyant use of Keytar for the outstanding Tuesday’s Child.

[TPA also had an interesting chat with Mike Morton and David Lloyd from the band, which will be published closer to the time of the new album release.]

Tony: Our Friday night headliners are Focus, and their performance to close the evening was brilliant. I admit to only loving the majority of this set, as in my opinion a couple of pieces were too avant garde, that free style jam-like performance prevalent with some ’70s groups. That aside, it was great – rumours of prog dancing were completely founded as Thijs van Leer and his band treated us to House Of The King, Sylvia, Hocus Pocus). The latest offering from the band Focus 11 (the one with the wonderful Roger Dean cover), was on sale, however a lack of currency in my pocket prevented this purchase.

The energy on stage was incredible, long solos, including an incredible 15-minute drum solo during Hocus Pocus, overwhelming as our Friday night entertainment ventured into Saturday morning. That focus, pun intended, was evident throughout, even the bits I wasn’t so keen on! Only the first night and I already felt the money well spent.

It would be fantastic if these small festivals could be found throughout the year, perhaps one every two months with the promoters working together to develop the support for our music without boundaries; I leave that out there as a thought.

Leo: They’re Legends for a reason – outstanding musicianship and style from these Dutch masters of Prog.

After a rather languid start they thrilled the crowd with classics such as Sylvia and the epic Eruption. They played a set of contrasting classics as usual, including Focus 2 but sadly without any new tracks from Focus 11. The fabulous, extended solos showed their terrific musicianship, and during Harem Scarem Focus legend, Thijs Van Leer, strolled off stage, went to the bar and sat with the crowd to witness for himself to listen to the mastery of his own band. Eccentric and brilliant, which sums up Focus live.