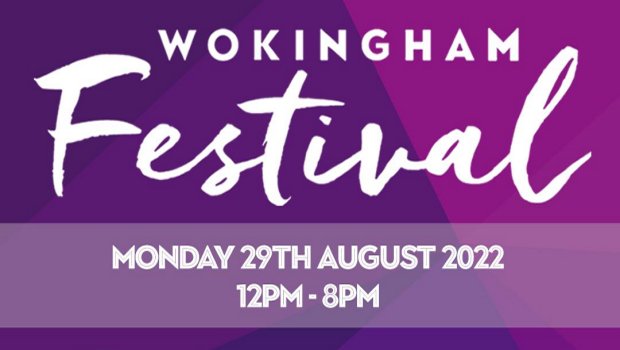 The Berkshire town of Wokingham offers a most delightful summer festival! It’s a small family-friendly community event, with live music as the big draw, taking place in one level field in Cantley Park with limited parking on site (no camping), and a low ticket price – £11 for the day.

With a notable musician living within the vicinity, prog rock is in abundance, usually collected together on one day of the festival that runs the long August bank holiday weekend. Local lad John Mitchell, with his White Star record label luminaries, was much in evidence, not promoting his latest Lonely Robot release but supporting his compatriots, helping out on stage with guitar when required.

The main music stage, sponsored by a local business, is quite high up with a great view from across the site, and a large area for punters to stand and mingle in front. The smaller Wokingham Music Club sponsored stage has seating under cover. Our headliner, Focus’ Thijs van Leer, is very much in evidence at both, appropriating any handy deck chair left vacant and enjoying the preceding bands, chatting to fans, relaxing and drinking in the atmosphere.

There are also a good variety of food stalls (although many had sadly sold out by mid-afternoon of the last day), children’s activity tents, locally made/traded products, and the all important bar marquee where delightful pink flowing/frothy wigged staff, including perennial music festival goer, character and friend Paul Rhoods, presiding over a goodly selection of barrels and cans.

I knew I was unavoidably going to miss the first band of the day, the straightforward rocking Third Lung, but, due to the vagaries of national rail, limited phone signal, and lack of signage, sadly I also missed the next, the ‘6os/’70s inspired The Honey Pot. Apologies to those two bands for no report.

Having been welcomed by cheery volunteers at the gate, and spying various friends and gig regulars with portable chairs set up near the main stage, I caught part of young local band In Albion’s set on the small stage; very impressive, especially the guitar work. No time for much else than a quick hello to pals before Planet Rock’s Darren Redick took to the main stage to welcome:

Sultry sophistication, atmospheric mood, and quality melodic from a re-jigged line-up; as usual, multi-instrumentalist leader Danny Sorrell’s expressive voice, keyboards, and guitar impress, with vocal support from relatively new member Sarah Bailey, who is now firmly ensconced in her role. Indeed, she started off the set solo! Danny and Sarah’s voices blend so well, it’s gorgeous to hear! Plus John Mitchell guesting on lead/extra guitar (keyboards last time I saw them) with the solid rhythm section of Graham Brown and Diane Fox – almost entranced – rocking out at the back! These are stunning musicians, delivering superb impassioned thoughtful songs.

Over again to the Wokingham Music Club stage for Aaron Cilia, featuring Aaron on guitar and bass, with the impressive Maxine Cilia (his mum) on supplementary lead guitar and vocals, dressed in purple with guitar to match. A good crowd had assembled with all seating filled and plenty standing for this impressive local prog-leaning rock band.

I was distracted from watching further by the enticing scent of food cooking nearby. My appetite considerably whetted, I could still listen to the tuneful and varied sound of the band as I roamed the food stall area, the result of which saw me sitting on the grass somewhat subjugated by an enormous tower of a Peruvian lamb burger which, with the intriguingly seasoned vegetable element (spicy peppers and onions) piled high, formed a delicious but extremely messy dining experience, undoubtedly more suited to within a bath as it all broke free from its bun-plus-spear restraint.

Suitably fortified and re-energised, I was back to the main stage for:

Prog leaning heavily on the pop/rock side and impressing with the impassioned and unique quality of vocalist Martin Wilson. Guest spot for the last number from John Mitchell on guitar, making the most of his time here today accompanying his label chums.
It’s amazing that The Room played here at all, with Alistair Bell standing in heroically for the late and lamented Eric Bouillette (who only passed away a week before) on lead guitar. I’ve seen these guys several times but today they had a particular edge, unsurprisingly. A lovely spoken tribute to Eric from bassist Andy Rowe preceded the set. 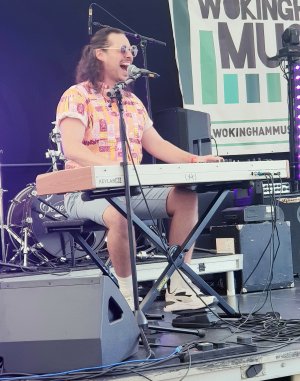 Next over on the Wokingham Music Club stage for a joyous moving set from the stunningly pure voiced Joe, playing solo with keyboard! Troubadour-like, with quips about his own playing and presence, and heartfelt commentary in equal measure, Joe absolutely draws us all in and commands any stage with his effervescent personality and many-layered and textured songs. Full-on emotive torch style songs one minute, and catchy pop-based numbers the next. A bout of audience participation jollied us up, joining in on the chorus to one of Joe’s newer songs, the bouncy Falling in Love is Easy But Falling Out of love is Hard. Joe’s set was a gorgeous, glorious addition to this festival, and a fab contrast to the rest of the acts today.

The crowd had already formed at the main stage for our headliners, but with a bit of weaving in and out, I managed to find a completely empty spot at the very front, just in time for:

FOCUS
Great fun as always! Best full crowd of the day at the main stage, the band seemed to be enjoying themselves as much as the audience! We got the usual exhilarating festival set and a few extra numbers, including the uproarious All Hens On Deck with a supercharged solo from guitarist Menno Gootjes, and the delicate and plaintive Focus 7. 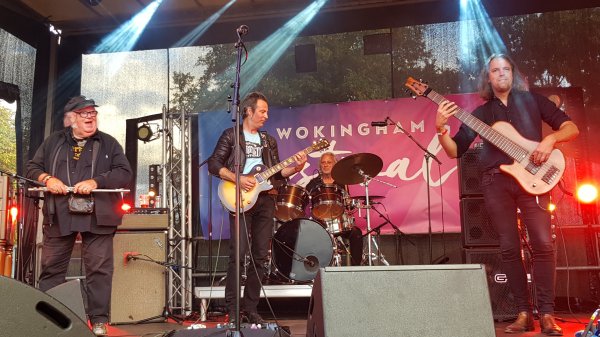 The usual musical humour abounded in full today with leader Thijs van Leer in fine fettle on Hammond organ and flute, sometimes together, particularly enjoying his vocals within the scat section of Eruption, getting the audience to join in with the call and response and indulging in a bit of fun with quirky facial expressions, plus an arm waving antic or two in the quirky funky intro to Sylvia, amid grins from Menno Gootjes and Udo Pannekeet (six-string bass). At various points, along with veteran Pierre van der Linden on drums, both took delight in the improvised solo opportunities afforded to them, evidently concentrating hard and displaying their dexterous individual talents to rapturous applause. 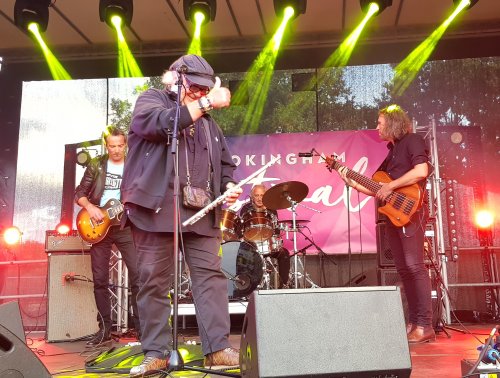 Thijs led a touching tribute to former bassist from the earlier years, Bert Ruiter, who passed away earlier this year, and they then performed a specially composed piece in his honour, For Bert, which encompasses an appropriately respectful and sombre guitar and bass combined melody. 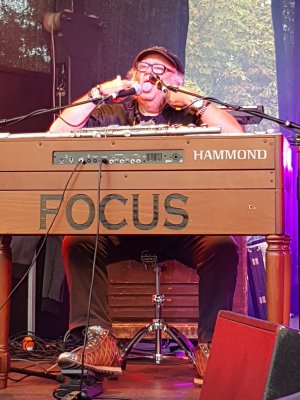 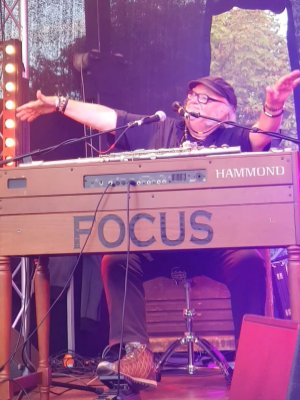 Prior to the expected raucous finale of Hocus Pocus, Thijs indulged us in an extended solo spot, revealing more of his classical roots, this time incorporating J.S. Bach’s Air on a G String (from Orchestral Suite no.3), most commonly known in the UK as the music from a certain well known cigar advertisement, much to the audience’s delight! I’ve seen Focus many times but never heard him play around with this piece before. As usual with festival sets, it was all over way too soon! I thoroughly recommend a full Focus concert, as they could only delve just under the surface of delights here.

To sum up, I felt that the audience area could certainly have accommodated more people, but the festival clearly received a good number of visitors to make it worthwhile, as next year’s event was announced from the main stage during the closing farewells and thank-yous to the team. 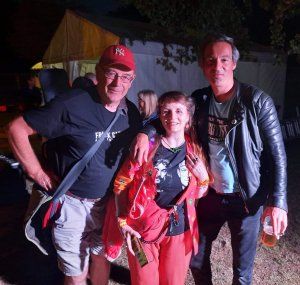 A kind invitation ‘backstage’ via the security staff, who wanted to clear the field of revellers, induced the (almost) annual photograph opportunity engineered by friend and usually general band lackey Roger Marsh, with Menno from Focus. Previously I’d found myself cajoled into being part of a photograph with a small group of chums, including members of Flutatious who had performed the previous day. It was so nice to see that they’d stayed/returned to enjoy the rest of the festival, as it was to find musician John Young among the crowd, having popped by to see and support his chums John Mitchell and Focus in action.

A nice civilised finish time of 8pm (just for the Monday) meant that I wasn’t having to leave to catch the last train during the camaraderie. Dry weather almost certainly helps the genial atmosphere at such festivals as this, and we were most fortunate in that respect, but this truly was an enjoyable proggy day out! Thoroughly recommended for the future.

[Many thanks to Jane Armstrong for her picture of Aaron Cilia.]