Steve Rothery this year celebrates two significant milestones, one of reaching the grand age of 60 and also that of having spent some 40 years with the band Marillion, who he had joined in 1979 when they were called Silmarillion, after the JRR Tolkien book of that name, before Fish joined in a line-up that also consisted of Mick Pointer, Doug Irvine and Brian Jelliman. After several line-up changes the band shortened the name to Marillion in 1980 and went on to become the band that we know and love. TPA’s John Wenlock Smith caught up with Steve recently in a Soho hotel where he talked about four decades with the band, the forthcoming U.K. tour and his solo plans, amongst other things.

Thanks for making the time to talk with us, it’s really appreciated, this is very kind of you.

You’ve got a lot going on with you guys now?

We’ve always got a lot going on, especially me in particular because I do my solo stuff and various other projects in between the Marillion dates. So this year has been a pretty crazy year for me, but for Marillion, we are about to tour with our friends from the orchestra and work through those arrangements next month with the first show in Liverpool in November.

We’re coming to see you in Birmingham.

We saw you there last year as well, which we enjoyed immensely.

It’s a lovely place to play.

Yes, and I’ve also been to a couple of the weekends in Holland too.

This is my wife Sue, she lets me go to all these.

Well you’ll have to bring her next time too, it’s too good to miss.

You have a new album coming out, with the orchestra.

Yes, it’s just been announced today. We went down to Real World studio in Bath (Peter Gabriel’s own facility) and spent five or six days I think recording it, it’s an amazing place to work and these girls and the French horn player are all world-class musicians.

I’ve seen the track listing, but one song I thought would have worked well is Beautiful.

Well you can almost point your finger at any song in our catalogue and say “well that would work well with strings”, one of those is Gaza, which we might try and play live but it’s not on the album.

That would be interesting as it’s such a powerful song.

You can imagine that with the strings on.

Yes I can Imagine that. So will this album be the basis for most of your set for the tour?

That’s going to be a good tour, I’m looking forward to it immensely. Obviously you’re excited about that as well.

It’s going to be an interesting experience I think. 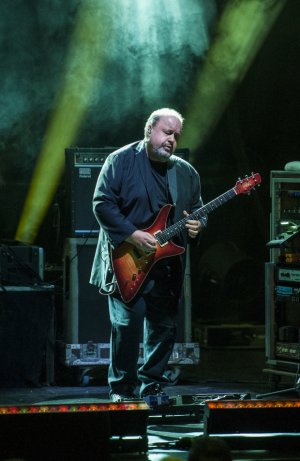 So what’s happening with the next album, any thoughts on that?

Well having spent time working on this album with the orchestra, Mike Hunter [producer] has spent a lot of his time working on the arrangements for that, so we’re really only in the early stages of working, and by working I mean jamming. Mike has several hundred hours of jams to work through, looking for ideas that we will then put onto a Soundcloud account to listen to and then to work further. In the old days we’d obviously write things separately and then work through, but nowadays this is the only way we can work without killing each other, but it is all about the chemistry of the moment, it does allow for those moments when someone has maybe the ghost of an idea. Maybe I’ll have a guitar line that Pete can move a bass line against that suggests certain chords that Mark can play on the old Joanna and suddenly, from nothing, this thing starts to coalesce and take on a life of its own. It’s miraculous, it’s really like magic.

It’s a thing of beauty really.

It Is, best when those moments that come around so spontaneously can impact people’s lives, that people can be moved to tears by, something that was just born in that creative moment.

You also have your own solo stuff ongoing as well.

Yes, it’s been four years since The Ghosts of Pripyat album, which was very successful for me, which I toured, playing that and some old Marillion songs. We did a weekend in Mexico earlier in the year, I’m in the middle of doing a new instrumental album at the moment called Revontulet (the Finish word for the Northern Lights, ‘Fox Fires’), a beast fable about a fox whose tail sweeps the snow into the sky, creating the aurora borealis. it’s a space themed album, I went down to Chile to a place called La Silla where I filmed some remarkable drone footage and played at a lesser observatory, during a solar eclipse. I’ll put the footage we took on YouTube in the next few months, it drives my wife a little crazy because I’m either doing Marillion shows or going round the world doing my own stuff or playing on other people’s records, but you only live once.

Indeed, Pete (Trewavas, bass player) is in Sweden with a new Transatlantic album, isn’t he.

Yes, Pete’s another one who keeps himself busy.

I think it’s great, all these projects, the world of music has changed immensely.

Yes, it all keeps the band’s profile up, and your own personally, too. I’ve had a lot of publicity in my own stuff which all helps the band profile, and it recharges your own enthusiasm for the band.

It would be good to see you do something with Steve Hackett, it would be interesting to see that.

I’d be interested in doing instrumental music with Steve rather than a song-based album, when it has songs it gets judged in a different way, it has extra baggage.

Kate Bush, I’d love to work with her and Joni Mitchell, not that she’s done much in the last 20 years. and Neil Finn is an exceptional songwriter.

So at these dates are some of the songs from Fear going to reappear?

Yes. Possibly The New Kings, the Fear album is the Nostradamus of Progressive Rock albums.

Yes, if it happens we’re three years down the line and it’s a nightmare for bands like us with VAT, customs duties and carnets.

That’s something I know about, I used to work for Bentley doing customs work. It’ll be a disaster and make life very difficult for groups like yourselves.

Nice cars though, my friend Steven Kane drives for Bentley (he was one of the Bentley boys who drove the winning Le Mans car in 2003) and Ian [Moseley] used to have a Bentley GT until about a year ago.

One last question: Any music you have heard recently that you’d recommend?

I find it very hard to find new music that captivates me, but I have heard an album called Carrie and Lowell by an American singer-songwriter called Sufjan Stevens that caught my attention. It’s like Simon and Garfunkel but with very deep dark themes running throughout, well worth looking out for if you can.

Well Steve, my time has gone. Thanks for taking the time to talk to me, much appreciated. I’ll see you in Birmingham in a few weeks’ time on the tour.

Yes indeed. Thanks John, enjoy the show when you see us. Thank you. 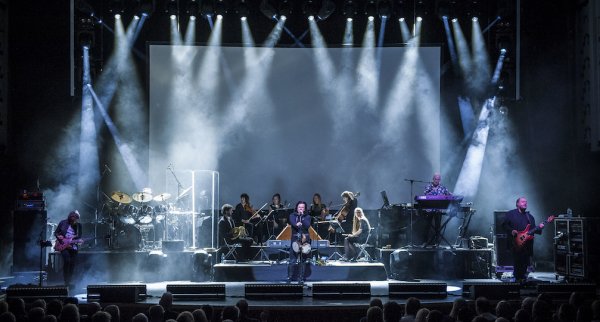