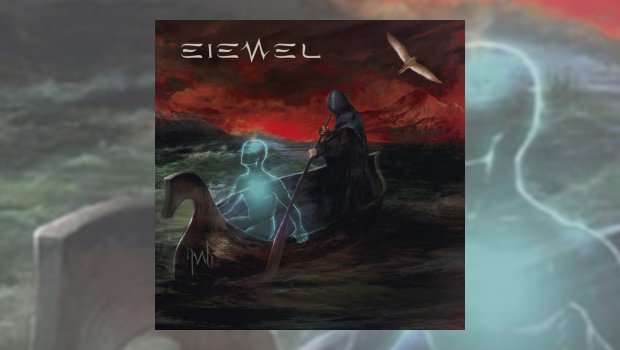 So who or what are Eiemel? Eiemel is the name of what is essentially a solo project of one Ariel Martin Loza, an Argentinian musician who’s best known as being the ex-bassist in symphonic prog band Laquesis. For the last three years, however, he has been holed up in his home studio, the wonderfully named So Many Notes, making this album. Despite the studio name, this project is not an exercise in cramming thousands of notes into a few bars, but rather an eclectic fusion of various styles, from prog to metal, jazz to ambient, even big band swing. Dull it is not.

Nor to be honest is it a completely solo endeavour, as he has drafted in an array of musicians to assist in realising this vision, adding their skills to his basic framework, and the standard of musicianship is high. The opener M.o.r fades in with a Floydian keyboard drone, then guitar and bass, plus xylophone notes. It’s probably a keyboard made to sound like a xylophone, but who cares, it sounds good, and makes a nice intro piece. This leads us into a more guitar led piece, with sharp synth flourishes, and sporting a Moog solo which brings Keith Emerson to mind with a smile. For me, these instrumentals work the best, but there is so much varied content here, and that includes songs with vocals! Plan B is the first of these, and being sung in Spanish, I have no clue what it means, but it’s a nice enough pop-rock song with a very fluid bass line, and sounds pretty good.

Being a die hard prog fan, I have to say that the two lengthier tracks are my personal favourites. Ave de Paso is a great piece, which has so many twists and turns packed into its eight or so minutes, but at the same time is very accessible and melodic. There’s much heavier riffing here, with the melody picked out first on synth, then guitar, but nothing stands still for long in this track. The other longish song, Temblor, is another instrumental in two sections, starting at pace and instantly busy with stop/start riffing and soaring guitar over layered keys, sounding a bit like an accompaniment for a car chase. After a couple of minutes, it calms down with a flute and guitar segment which is gorgeous, then rain and thunder sounds transport us to the second phase with Tangerine Dream-style synth patterns, before more guitar heaviness, time changes, some lovely fretless bass from Mr Loza, and a cracking guitar solo from Rodrigo San Martin. The whole nine minutes flash by, there’s so much going on. More of this please!

Elsewhere, we have a rich tapestry of styles and moods, from the lush keys and acoustic guitar of Ojala La Iluvia, the much heavier Aquerente, sung in English with a multitude of different keyboard sounds and hard riffing, to the big band swing of In Full Swing, which is just such a fun tune! Parece que Fue Ayer sounds like a Mike Oldfield jig, and I’d Do It All the Same has a Parisian feel, a lovely ballad with tasteful echoey electric piano and Ariel Aguilar on bandoneon, a kind of accordion giving the French flavour. It’s all beautifully crafted and quite irresistible. And not every song needs a bevvy of guests, as Ariel Loza proves he can play a variety of instruments himself, such as on Chaotic Law where he plays everything other than drums, and pulls it off with aplomb, laying down some jazzy chords, funky bass lines, a tasty guitar break, and a terrific keyboard solo. Arrullo forms the record’s coda, a lush lullaby with a gentle melody, and an obvious choice for closer.

The danger with an eclectic mix of styles, such as we have here, is that it ends up messy and incoherent. I think Ariel avoids this, as his musicality permeates the whole album and provides a core style somehow, but I would welcome perhaps more time devoted to his strengths next time around, as one or two songs are relatively forgettable. Other than that, I would recommend giving this a listen, as I’ve found it a very entertaining and engaging way to spend 70 minutes.

* a Spanish bagpipe
** an Argentinian accordion