Marillion Fans Light the Way to Get Tour on the Road

Marillion have already invested more than £150,000 in preparations for the 10-date UK road trip, but risk losing it all if just one of the band is forced to isolate with Covid. If any part of the tour is cancelled the group would have payments to honour on top of not receiving any money from any remaining gigs that had not been played.

The reaction of the fans has been incredible says keyboard player Mark Kelly: “Oh, yeah, and, to be honest, we’ve had people calling up and asking if they can chip in a grand! We haven’t got the facility, really, to take those sorts of payments, so we’ve said we’ll have to get back to them.”

Fans can pledge their support for the Lightsavers initiative through the Marillion website. While the higher value pledges have sold out, the band are still looking to reach their target and, with a little luck, the fans will come through.

“£150,000 would cover our costs: the lighting, the PA, the trucking, the tour buses and the crew’s wages, that’s it,” says Mark. “If the tour gets cancelled on the first day, at least we wouldn’t have to stump up 150 grand which, quite frankly, none of us have got. Our fans are amazing and we are so grateful for their support. 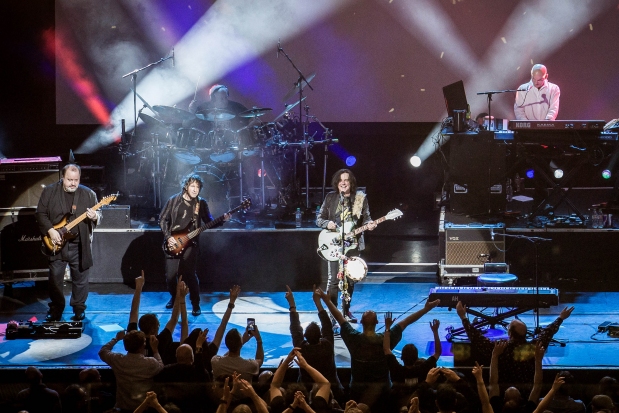 “We’ve done a thing with PayPal, so we don’t get the money, it goes into a PayPal account. If we don’t need it we can just ask them to refund everybody. That stops any tax implications, as well. If we were to put that money into our bank account the tax man is going to say ‘That’s your money, you need to pay tax on it!’ We thought the PayPal thing was a good solution, we don’t have to actually touch the money unless we need to.”

Regardless of whether their money is eventually returned or not, every person who donates will receive ‘money can’t buy’ items in return. Depending on the amount pledged, this includes seeing your name in a tour programme (no longer available due to print deadlines), a free download of a gig, a group chat or even a personal meeting with the band via Zoom.

Fans will also be entered for a raffle with prizes such as a handwritten lyric of their choice, a full set of guitar plectrums and personal ‘shout-outs’ at concerts.

“It was actually our manager’s idea… Lucy [Jordache] sat there worrying about what we would do if one of us got ill during the tour and how much money we would end up losing. She said ‘Why don’t we try and crowd-fund it,’ and we thought that was great idea.

“I was listening to Planet Rock on the way home. They played Kayleigh and they were talking about the whole insurance thing. It’s certainly got us a lot of interest, I suppose, and people are saying what a good idea it is.”

For many years Marillion have enjoyed a unique relationship with their fans and have the honour of having invented the whole crowd-funding concept. In the late 1990s Marillion’s fans sponsored an entire US tour following an appeal and the band responded by creating the very first rock ‘n’ roll website in the UK, changing the musical landscape. The support of Marillion’s passionate fans enabled them to bypass music industry convention and take control of their own future. Away from record company pressure, Marillion launched their own record label and enjoyed the freedom to produce some of the finest music of their career.

In 2001 Marillion asked fans to pre-order their next album, a full 12-months before release. Incredibly, 12,000 people signed up to finance the recording and launch of the album Anoraknophobia. Marillion had invented crowdfunding as a business model and returning the fans’ faith with a specially packaged CD with each subscriber’s name included in the list of thanks.

“It’s more like the tour fund, the original crowd-fund from 1997 in America,” Mark says. “We didn’t have the money and we were used to having the record companies offer some cash to help ease the shortfall. No one wants to go out and work and end up having to pay for the privilege, although it’s quite a fitting thing to do on the 20th anniversary of the album.”

“You know, we’re getting on better, these days, than we ever have,” Mark adds. “The truth is, we are all getting on a bit, you mellow as you get older, and you stop worrying about all those little things that seem to be such a big deal when you’re younger. I always say: we’re successful enough to keep going but we’re not successful enough that we can split up and retire! We’re in that sweet-spot where it’s been a long career rather than a quick flash-in-the-pan, overnight success and then crash and burn, which is what happens to a lot of people.”

A long and successful career, that’s the stuff of dreams for every musician as they try to make their way in the music business.

“Of, course,” Mark laughs, “but we never thought of that at the time! When I joined the band, I said I would give it a year and we’ll see what happens. I was at college and I said to my tutor ‘I want to go and join this rock and roll band in Aylesbury.’ I said ‘If it doesn’t work out, can I come back in a year’s time and carry on where I left off?’ He’s like ‘I think you’re mad! But, yeah, ok.’

“That will be exactly 40 years next month. My first gig with Marillion was on the 1st December 1981 in Cambridge, a pub called The Great Northern. And we’re going back there (Cambridge) on this tour. My youngest daughter is at Cambridge University, so she’s bringing all her friends along.” 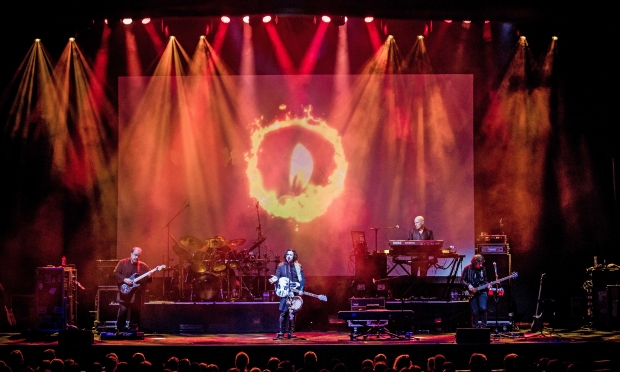 Ahead of the tour, Marillion are now in rehearsals and planning to include a track from their new album An Hour Before It’s Dark, due for release in the New Year.

“We were back in rehearsals today and we played through Be Hard on Yourself, the new song that we’ll be playing, and it’s sounding good. I think this will be great to play live, a really up-tempo song which is about 8 or 9 minutes.

“The album has six songs, although we’ve sort of divided it up into smaller sections. It’s all finished and gone off to manufacture but the turn around time, these days, because of the paper shortage, the cardboard shortage and the vinyl demand, means it’s six months before you can get a record out. Unfortunately, it’s going to be February by the time it’s released.

“We’re really pleased with it and we’ve had some great feedback from people who’ve heard it. Ok, they’re friends and family but you can tell when people are actually excited rather than just being polite. Lucy Jordache, who’s been managing us for 20 years, says she thinks it’s the best album we’ve ever done.

“It’s weird because you go through stages of wondering if it’s any good, thinking it’s good and then wondering if it’s any good again. I think we’re all quite excited to get it out there and the good thing, compared to [2016 release] F.E.A.R., there is a bit more pace to it, faster moving and not so much slow music. I really like to listen to slow music but, in a live-gig situation, it can be quite hard to put together a set if all the songs are quite slow.

“It has all the usual Marillion trademarks, A lot of credit goes to [producer] Mike Hunter, he was the brains behind it. We’ve come up with all the music and the lyrics and he’s charged with the responsibility of sifting through it all and trying to find the good bits! Then he has to try to persuade us that they are actually good bits and sticking them all together. It’s a long process but, when we’ve been doing it this long, it’s the only way we can work, really.

“It took us five years to get to the point where we had an album’s worth of material that we all thought was great. There are five or six other songs, maybe more – and some were completely finished, but if all five of us didn’t love them we decided not to put them on it.”

So, with the album completed and the fans rallying to ‘insure’ the tour, Mark and the band can look forward to getting back on stage although, says Mark, it will still be a little different.

“It’s going to be a weird one because while it will be great to play the gigs, the rest of the time is going to be odd. We’re going to have to keep ourselves isolated from everyone, we’re not going to be able to shake hands or sign autographs or meet people. Basically, we’ll have to lock ourselves on the bus or in the dressing room, we’re not even going to mix with the crew.

“On days off, we’ll just be in a hotel room. It will be a challenge, after 40 years we might actually split up at the end of this tour!” he laughs. “We’ll have to sit there and actually talk to each other! No wives, no children, if anything goes into the audience it’s not coming backstage. We might even be taking some Oculus headsets to pretend we are somewhere else!”