The announcement was short and not so sweet: John Marshall (now 80 years old) and Roy Babbington (81) are both ill and therefore cannot participate in the performances of their beloved Soft Machine. But we need not worry: guitarist John Etheridge (73) and flautist/saxophonist Theo Travis (57) have found two extremely capable musicians willing to replace both icons. Experienced fusion drummer Nic France will take the place behind the drums while the equally experienced Fred Baker will take up the fretless bass. It’s a shame, but nothing can be done about it. It would soon become apparent that the quality of what was offered would not suffer from such mutations. Around half-past-eight, the foursome kicks off at the Boerderij, the venue certainly not sold out.

Opening track Hidden Details from the eponymous and most recent album from 2018, immediately gets a ‘thumb-slapping’ bass treatment and tight drumming, making the song sound even more modern than the original. The following The Man Who Waved at Trains contains a beautiful duet between guitar and flute with quite a bit of echo on the latter.

John Etheridge takes care of all the introductions, as usual, and does not shy away from some self-mockery. He wonders how on earth they came up with the title (Destination) Down to Earth. There are numerous solo spots, especially for Travis who lets rip in quite a weird solo on his tenor sax, but keyboards and bass also assert themselves. Only then it is time for the introduction of the band, Etheridge lifts a veil on the absence of both veterans, more on that later. 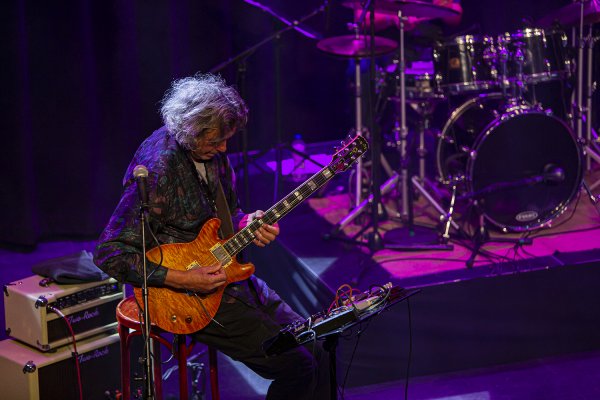 The Tale of Taliesin is next on the set list, from the Softs album from 1975. Theo Travis, the youngest member, although already 15 years a Softie, is apparently the biggest connoisseur of the band’s oeuvre, Etheridge occasionally forgotting from which particular album certain songs derive. Heart Off Guard is characterised by an outrageous guitar solo as well as a guitar/drum duet with France, the like of which you don’t see very often.

The ethereal and melodic Broken Hill is dominated by soprano sax and guitar, I would almost say it’s soft jazz. On the other hand, Grape Hound is a rocking 21st Century piece, with unison guitar and sax. Travis’ ripping tenor sax solo sounds like he just performed with Dave Gilmour. Time for a break, not only for the musicians but also for the audience. Both Nic France and Fred Baker have longstanding relationships with Soft Machine, although neither have worked for the ensemble before. The highly respected France has played with just about everyone in the British jazz/rock fusion scene but has also toured with the likes of David Gilmour. He changed drum stools several times with the man he’s replacing during this tour, John Marshall, albeit in other bands.

France’s drums sound like cannonballs and all this comes from a very scanty drum kit. His interplay with Baker, playing fretless bass all night, is extremely solid. Fred Baker has a long history with a number of Canterbury bands, including In Cahoots, in which he played with Soft Machine founder Hugh Hopper. I think it’s difficult, even for die-hard fans, to state that this duo is inferior to the men they replace, while keeping a straight face. The rock solid backing duo pays close attention to the directions given by Etheridge, and especially Travis. Several times, he gives the signal when all soloing must cease, marking the return to the central theme. 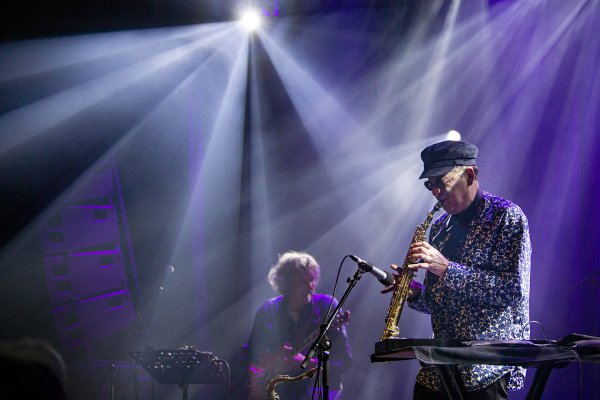 Theo Travis, wearing a cool cap, sunglasses and a colourful shirt, plays his parts almost motionless on various saxophones and flute. Now and then there’s a brush of the keys, but it’s especially his flute playing that really appeals to me. He makes full use of an arsenal of sound effect pedals; his collaboration with Robert Fripp, Steven Wilson and David Gilmour, among others, gives him a considerable amount of credibility as a musician.

John Etheridge, the last of the Mohicans for now, is in his element. Looking relaxed, sitting on a bar stool, sound effect equipment on a music stand, playing the same electric Martyn Booth Signature guitar all evening. His playing is remarkably modest, but on a number of rare occasions he really cuts loose and demonstrates his virtuoso, flowing technique, strongly reminiscent of his predecessor, the late great Allan Holdsworth.

The first song after the break is Fourteen Hour Dream, a melodic song with a beautiful unison flute/guitar duet. Gesolreut is heralded by Etheridge as the German version of ‘doremi’. The bass solo, which acts as an intro, gets a slapping funky touch. Hugh Hopper’s Kings and Queens sounds as fragile and beautiful as ever, with Travis’ flute in the lead role. 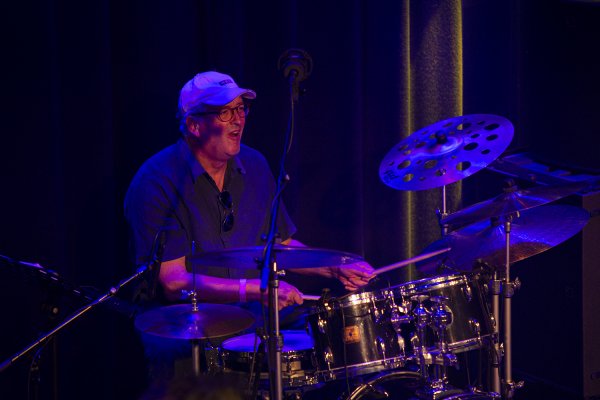 John Etheridge is the composer of One Glove, also from Hidden Details, his Holdsworth-esque playing being the main part, next to Travis’ tenor sax. Facelift is by Hugh Hopper and dates from 1970’s album Third, the oldest track the band play tonight.

Etheridge announces four songs that will be played as one. Successively The Relegation of Pluto, Tarabos, Sideburn (drum solo) and finally Hazard Profile, Part One form a fitting end to the regular set. “Eat your heart out, Beethoven!” the guitarist cries out. Just as quickly as they leave the stage, the gentlemen musicians return. The ethereal Mike Ratledge composition Chloe and the Pirates is the beautiful encore of a memorable performance.

The total show lasts about two hours, including encore. The turnout proves to be somewhat disappointing: only 120 people manage to find their way to Zoetermeer on a stormy Thursday, the fact that the show was forced to be moved due to COVID-19 will not have done the visitor numbers any good; two years ago the turnout was about double. Despite this, a good response from the mostly true connoisseurs of the genre, surprisingly including quite a few youth; so there is a future for the band. Light and sound were once again excellent, as we are used to at De Boerderij. 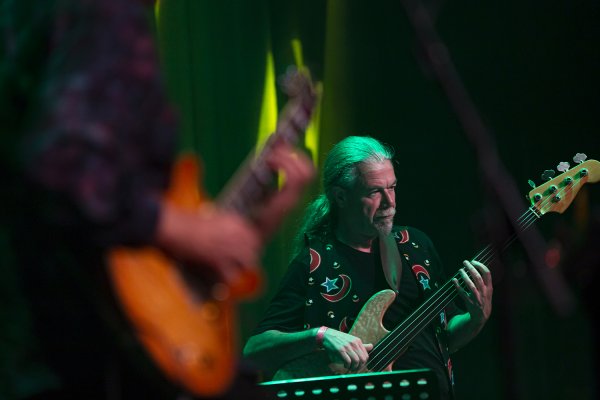 The average age of the band was brought down considerably by the ‘youngsters’ France (65) and Baker (61). Still, I hope to see veterans Marshall and Babbington on stage again someday, as they did in November 2019, with no detriment to their extremely capable replacements. But with both veterans (since 1972 and 1973 respectively) Soft Machine gets just that little bit more authenticity, Etheridge has ‘only’ been part of the group since 1975.

Whether this will actually happen is highly questionable: the travel allergy of the first and the hand injury to the second seem quite insurmountable at this age. But their replacements are certainly no punishment, as evidenced by tonight’s show. The foursome is currently at the end of a small tour that has brought them to a number of theatres throughout Europe, Vienna being the last station for the time being.

SETLIST
Hidden Details
The Man Who Waved at Trains
Down to Earth
The Tale of Taliesin
Heart Off Guard
Broken Hill
Grape Hound
~ Interval ~
Fourteen Hour Dream
Gesolreut
Kings and Queens
One Glove
Facelift
The Relegation of Pluto/Tarabos
Sideburn
Hazard Profile, Part One
~ Encore:
Chloe and the Pirates