On a cold November evening in 2019, Zoetermeer’s De Boerderij plays host to the legendary Soft Machine. Founded in 1966 by Daevid Allen, Mike Ratledge, Kevin Ayers and Robert Wyatt, the band, with its adventurous and groundbreaking music, was largely responsible for the emergence of jazz rock in the UK, at the time a relatively new genre. Of said founders, only two are still alive, many reincarnations of the band follow, personnel changes are the order of the day. However, the current line-up has been together for quite a while and still regularly performs at home and abroad, despite the advanced age of some of them. In short, time to go and see the foursome up close, thus far I had not been successful in attending their gigs.

The band kicks off at the stroke of half-past eight with the ethereal Penny Hitch from 1973’s Seven, followed by the title track of the latest studio album from 2018, Hidden Details, which immediately sets the tone: sheer chaos, ripping sax, dexterous guitar antics, thump-slapping bass playing and pounding drums – Soft Machine in optima forma, with a leading role for Theo Travis on both sax and keys. The Man Who Waved at Trains is calm and melodic, a nice contrast with its hectic predecessor. Ground Lift, also from Hidden Details, is almost unrecognisable, with many improvisations and a freakish sax intro. In any case, lots of material from the most recent album, which also applies to the following two songs.

Heart Off Guard blends seamlessly into the beautiful, extremely melodic Broken Hill, with Gesolreut, from 1973’s Six, the last song before the break. This swinging song, written by Mike Ratledge, falls into the ‘noisy but effective’ category and has a leading role for Travis on tenor sax. It’s half-past nine, time for a short break of about twenty minutes.

Drummer John Marshall (now 78) is the one with the longest history within Soft Machine, a member of the collective since 1971. He managed to climb on stage unsupported, but did not get up from his drum seat at the introduction of the individual band members. Possibly from fear of falling? But make no mistake, his playing on his modest Sonor drum set was still solid, powerful and inventive. Not for a second did you have the feeling that an elderly musician was occupying the drum stool: on the contrary, his drum solo halfway through the second set was arguably a highlight of the performance. 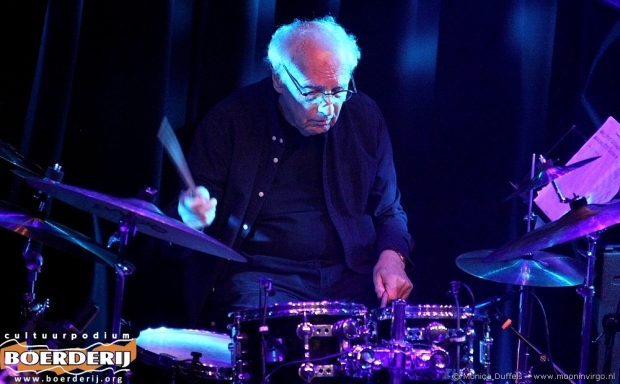 The oldest of the bunch is 79-year-old bassist Roy Babbington, the silent force behind the band and part of Soft Machine since 1973. Adorned with his inseparable cap, he is the rock-solid basis of the group, enabling Etheridge and Travis in particular to excel. With his melodic and pumping playing on a red Fender bass, he is the glue that holds them together. 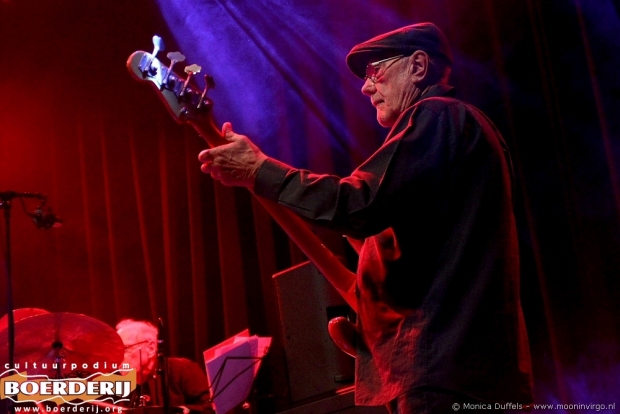 Relative newcomer and unmistakably the Benjamin of the band is virtuoso saxophonist Theo Travis (a mere 55). In addition, the multi-instrumentalist can also be heard on flute and keys. His fame has already preceded him; with his participation in albums and live performances by illustrious names such as Robert Fripp, David Gilmour and Steven Wilson, he has more than earned his spurs in the music business. His membership of Soft Machine has proven to be a much-needed blood transfusion that not only gave the band new energy but also an extension of its lifespan. 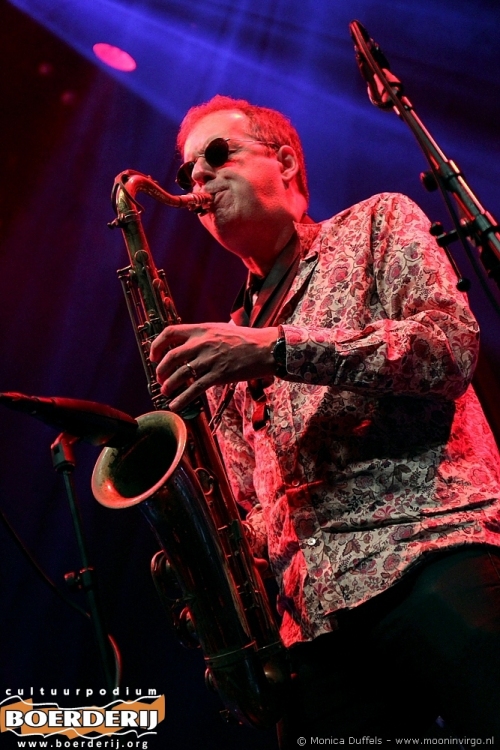 Guitarist John Etheridge (71), who took over the plectrum from his illustrious predecessor Allan Holdsworth in 1975, plays his guitar as usual half standing, half sitting/leaning on a stool. Part of his FX equipment is mounted on a stand, thus facilitating its use. Occasionally, he indulges in an Ed Sheeran-like act, but his fast and varied guitar playing is sufficiently impressive to attract full attention. He also provides all introductions and does so with gusto and visible pleasure. 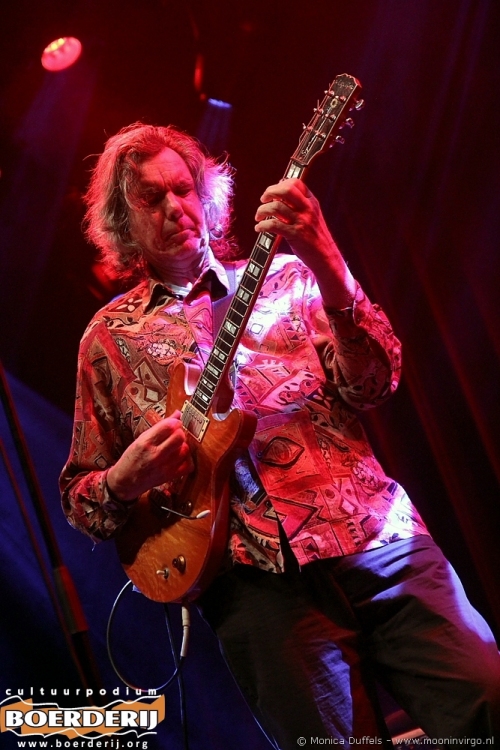 After the break, the band quickly gets off the starting blocks with Nettle Bed, a wonderful tune, and then into Fourteen Hour Dream which contains a nice unison duet between flute and guitar, a bit ‘Caravan meets Brand X’, with Holdsworth-like play by Etheridge. The next piece is the beautiful Hugh Hopper-penned Kings and Queens, a wonderful song and an oasis of tranquillity. The latter does not apply to One Glove, due to its different rhythm, but it’s certainly no less interesting.

After this, three tracks are linked together: Burden of Proof opens the trio, extremely swinging and melodic, after which Sideburn, featuring veteran Marshall’s drum solo, is received with loud cheers by the attending audience. Hazard Profile, Part 1 is the conclusion of the trio and also finishes the regular set. A minute-long applause descends on the heads of the quartet, it is gratefully accepted with several deep bows from the not so very young musicians.

The musicians no longer leave the stage before the encore. “Imagine that we are leaving and returning”, Etheridge jokes, after which the band start the first tones of Chloe and the Pirates, only to then actually leave the stage and return for a great version of the ancient The Tale of Taliesin. Apparently this is the last performance of a series of shows and therefore also the very last song of the tour, after which the members will not see each other for a while. Hence, the foursome goes completely crazy with a leading role for Etheridge, who now more than ever sounds like Holdsworth. The fans respond passionately.

John Etheridge, as said before, assumes the role of ringmaster this evening, and he didn’t do badly at all. As he pointed out later in the evening, Soft Machine never spoke, even when they experienced serious technical problems. He himself though was very talkative; about the ‘vulgar’ merchandise, about the filthy/nasty venues in which they had to perform in the seventies and about the long period of the band’s existence, including a gap of more than 20 years. He did so with a lot of humour and respect for the band’s former members, a large number of whom, as previously mentioned, are no longer with us.

The crowd this evening consisted of around 350 people, with only a very limited number of women. In addition, the average age was considerably higher than I have experienced so far: I estimate that more than half of the spectators were closer to 70 than 60. A connoisseur audience as well, especially of the older work, which meets with a lot of approval. Remarkable: the usual applause, halfway through a song, for special achievements on stage, was not included this time. Too much respect and/or admiration? Sound and light were once again of a high level in Zoetermeer, noblesse oblige.

The second part of the performance sounded a lot better, at least in my opinion. This particular combination of songs is probably a bit more coherent and excessive soloing was somewhat omitted. All in all, this was an excellent gig by these veterans and the response by the enthusiastic audience spoke volumes. There is still plenty of passion and joy among these musicians to be able to expect a continuation of the band’s now 53-year history. To quote Phil Collins: ‘Not dead yet’. 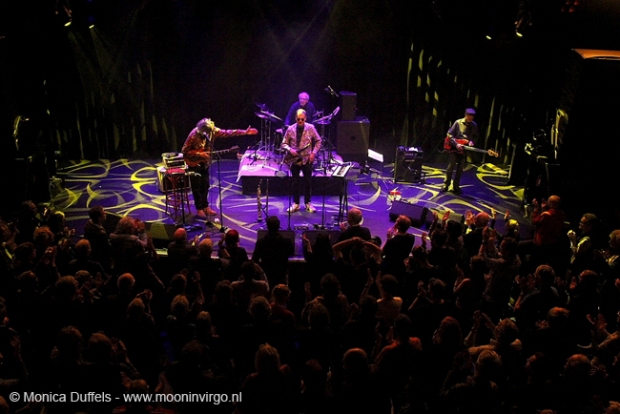 [TPA would like to thank Monica Duffels for the photos used in this article. More of Monica’s photos from the concert can be found: HERE]