Sometimes the odds are stacked so heavily against a band that it really shouldn’t be happening at all.

Lost In Thought have certainly been the victims of adversity over the years, for almost half of the period of their existence fate transpired to render them inactive, after near-fatal tragedy befell them on their first European tour supporting the well-received Opus Arise debut album. Somehow they’ve managed to bounce back and their second album, Renascence, was finally released at the end of 2018 – a full seven and a half years after the first – and now they return to the stage for the band’s first performance in almost as long. 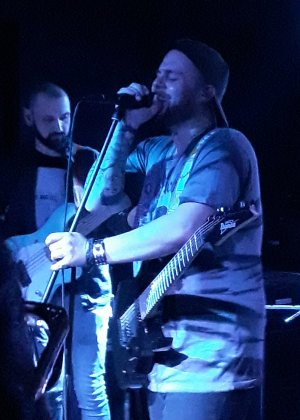 Having effectively split in 2012, Lost In Thought re-grouped in 2016, the line-up coalescing over the next two years as recording of the difficult second album commenced. The current quintet features original members guitarist David Grey and drummer Chris Billingham who appeared on the debut album, plus new recruits bassist Josh Heard and keyboardist Diego Zapatero, with singer Dean Lazenby (who worked with the band at the very start back in 2007 but left before the recording of Opus Arise) returning – and what a return it is. Dean’s vocals on the album are superb, but how will he do live? More on that shortly.

With this important hometown gig booked, another problem emerged as a change in circumstances meant that Diego was unable to make the trip from his home in Spain. A probable disaster, but not so as alternative plans were made to play the show as a quartet with Diego’s keys from tape. Not ideal but the best solution available.

And so, finally, the night of the show on a particularly wet and windy spring evening in Swansea.

I’ve not been to the Bunkhouse before, recently opened it’s the kind of venue that Swansea has been crying out for, a compact room but with a high ceiling and plenty of space. Hopefully, they’ll be able to draw more bands to what has for years been something of a musical desert, as far as the more interesting forms of heavy music are concerned. 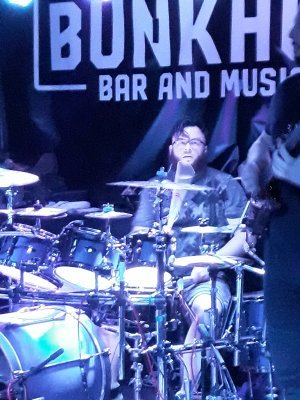 With three bands on the bill, I unfortunately missed openers Boxing Day Rage but managed to catch the last song of the set by Fractions, from Leicester, and enjoyed what I heard.

Before the show there were no obvious signs of nerves in the Lost In Thought camp, just a hunger to get on with it after such a long layoff, and once on the stage it was obvious that they were well prepared and confident in what they had to deliver.

And deliver they did, the whole of the superb Renascence played in sequence. If you have a liking for dynamic melodic prog metal then you need to investigate this album.

As the new voice of the band, Dean was always going to be under scrutiny, but he was flawless throughout. A massive step up for the band, he has the range and the ability to deliver the epic songs, but also the sensitivity to ring out the emotion in the quieter moments. He’s also an engaging frontman who easily built a rapport with the very healthy crowd (none of your two men and a dog audiences tonight), adding additional guitar to support David Grey and flesh out the sound. Hitting the high notes with ease, Dean is a pleasure to listen to, and without the posturing that many singers seem to have to resort to.

The lack of Diego didn’t seem to faze the band at all and the sound retained that organic quality you would expect, without any stiffness. Hopefully he’ll be able to make it over next time, but if not there is clearly a viable – if not perfect – solution in place, but I look forward to seeing the full band in action in the near future. 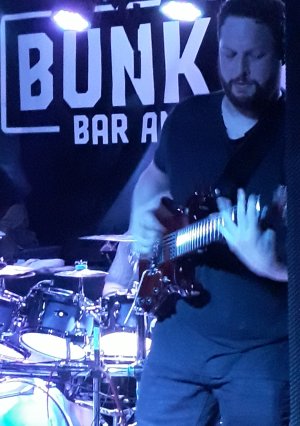 Josh Heard appears to be the quiet man of the outfit, methodically getting the job done, a solid and highly capable pair of hands, and as always David Grey demonstrated what a gifted player he is, peeling off the most technical riffs with ease, and no unnecessary showboating. At the back, Chris Billingham was on sparkling form and clearly loving it all, his dextrous playing the framework upon which everything else was laid out. It is proven time and again that a band is only as good as its drummer, and Chris is a vital part in making this truly excellent machine run as if it was on rails.

It was a compelling set from start the finish; the material from Renascence is top quality throughout, and the band have the skills to deliver it with power and confidence, a much more mature outfit than they were in 2011. As is often the case, tonight we saw a band that should be regularly playing much bigger stages to much larger audiences, and if there’s any justice their run this time will take them to bigger and better things. Tonight’s audience clearly enjoyed what they heard and responded accordingly, Lost In Thought gathering many new enthusiasts in what can only be regarded as a triumphant return, of which they should be justifiably proud.

Long may it continue, and if you’re looking to book a quality prog metal band with the ability to punch the heavy button yet still carry off the dynamics of a varied set of top-notch songs, you could do much, MUCH worse…

[You can read Rob Fisher’s review of Renascence for TPA HERE.]