I must own over a dozen albums where the ivory tinkler is one Dave Stewart, a man who was synonymous with underground progressive music in the 1970s. Dave’s ubiquitous nature was briefly highlighted in my personal history of progressive rock, which can be found HERE, if you have the inclination and the time – it’s a bit of a beast!

For all that, I know hardly anything about Dave’s later career as an alt-pop maestro, in partnership with his wife Barbara Gaskin, who was, of course, one of the Northettes in that fine, and to re-use a word from my prog history, “unhinged” jazz-prog band Hatfield & The North. I am here out of curiosity, and at the recommendation of my long-time gig going companion Phil W, who was missing Richard Thompson playing his new album at Towersey Folk Festival just to see this rare appearance by tonight’s stars. I’m not supposed to mention that, though. 😉

Fast forward over 40 years from Dave’s riding the underground prog train, and here we are queuing outside the rather grand and quite lovely venue Bush Hall, half a mile or so down the road from Shepherd’s Bush Empire. Ironic that after the long, hot, and dry summer we’ve had that Phil and I should suffer a thorough drenching earlier in the day on Tottenham Court Road. Taking time out to dry off and eat far too much pasta in our usual venue in Old Compton Street, we later arrive at the venue sated but somewhat slightly damp.

Chewing the fat with a fellow queuer for a good ten minutes before we both realised that I had reviewed his album a year or so ago (thankfully favourably, or it might have been awkward!), and meeting up with some fellow musical surfers in this charming venue were highlights of the evening, but what you want to know about is the gig, is it not? 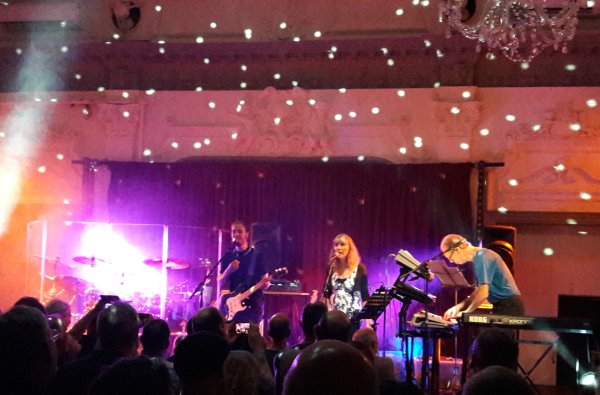 The audience came from far and wide, as Dave found out while calling out a list of countries’ names, getting responses from audience members from all over Europe and further afield. “Now this is beginning to sound like the Eurovision Song Contest”, said Dave after one lone “Yay!” to the question “Finland?” got the biggest cheer of the roll call. The multi-ethnic crowd witnessed a stellar performance covering the many albums and singles Stewart & Gaskin have released from the 1980s to date. The duo are known for their esoteric cover versions too, and plenty of these were also given airing.

Barbara Gaskin was in fantastic voice throughout, occasionally giving proud parent-like sidelong glances in the direction of young guitarist Beren Matthews as he leapt around in enthusiastic glee while wringing concise but still thrilling solos out of his instrument. This lad is a bit of a find, and a name to keep an ear out for. Drum gun-for-hire Gavin Harrison, shielded behind a screen, was a veritable powerhouse, but you knew that already.

Dave Stewart conjured all manner of sounds from his bank of keyboards, the opening song Wings On Our Shoes containing oboe, clarinet, and flute solos alone, and a gorgeous piano solo was the highlight of Heavy Heart. Emperor’s New Guitar was unexpectedly heavy, and if keyboard players didn’t “shred” before, they do now.

The cover of Levi Stubbs’ Tears was preceded with one of Dave’s many humorous intros: “Marcus Bath, are you here?”… silence… “Well that’s too f**king bad, because you requested this song!”, to much guffawing from the audience.

Although confessing to being a Chelsea fan – well, none of us are perfect after all! – Dave told us that Into The Arms Of Mikloško was named after Ludek Mikloško, West Ham’s goalkeeper from the 1970s, and was the only football song ever written from the point of view of the ball. You can’t get much more esoteric than that. There was a classic distorted synth solo in this one, and the song ended with a solo evocative of the tone generator Hatfield sound.

Cloths Of Heaven was dedicated to absent friends after Dave noted that most of his bandmates from those heady ’70s days are no longer with us. A poignant moment.

The evening was rounded off by a couple of storming covers for the encore, and we all went home, or back to our hotels, more than happy. A thoroughly good evening’s entertainment, it has to be said! 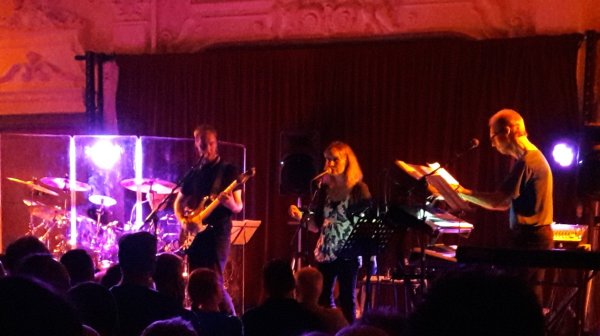 [With many thanks to Billie Grammer Harbottle, who took more and better notes of the evening than me, and without whom I could not have compiled this review.]

SETLIST
[An approximation, cobbled together from various sources over a protracted period. This is the reason for the undue delay in publishing this review. The actual setlist proves as elusive as a 4/4 time signature in an Egg song!]
Set one:
Wings On Our Shoes
Emperor’s New Guitar
Heavy Heart
Ride The High Atlantic Wind
Levi Stubbs’ Tears
Set two:
Let Me Sleep Tonight
Arms Of Miklosko
Summer In The City
Different World
Cloths Of Heaven
Afraid Of Clowns
~ Encore:
Walking The Dog
Shakin’ All Over