Let’s talk about guitarists for a moment.

There are innumerable mindbogglingly talented players around, deploying all of the tricks and techniques that the human brain (and fingers) can conjure up, but how many of these find a unique voice and manage to sustain a career over five decades? I’m sure we can all think of a few, but a name that should feature highly on any such list is that of Andrew Latimer. 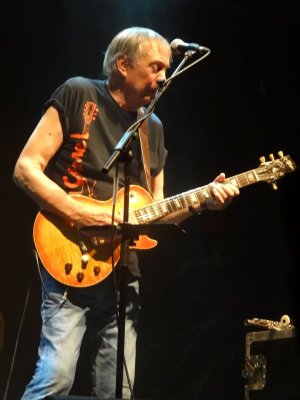 In another universe, Latimer would be revered as a national treasure and lauded as the supreme talent he is, as it is mention of his name to just about anyone outside the fanbase or the wider prog-sphere will no doubt result in the response, “Who?”. This only goes to underline how screwed the world currently is.

Andrew has spent a lifetime coaxing Camel, his vehicle of choice, through the arid landscape of the music industry, occasionally having to pick himself up and dust himself off after one particularly bruising fall or another, but despite it all he continues to bounce back and astonish with his emotion drenched playing, not least after an extended period of inactivity due to serious ill health that lasted a decade and seemed to have put paid to the band for good. Only the most optimistic of souls would have anticipated Camel hitting the road again, but so they did in 2013 for the ‘Retirement Sucks’ tour, taking in the U.K. and a smattering of dates in Western Europe. A last hurrah? Not so, 2014 took them to more southerly climes, familiar Camel alumni Ton Scherpenzeel replacing ailing keyboardist Guy LeBlanc, but tragedy had not yet done with the band as LeBlanc succumbed to his own illness prior to the run of shows in 2015, adding hugely to the emotional tug of those performances. 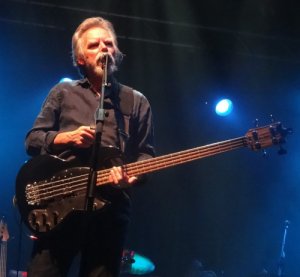 With Scherpenzeel being a committed non-flyer, what was to be done when Japanese shows were floated in 2016? A fortuitous recommendation led Andrew to multi-instrumentalist Peter Jones, probably known to some for his Tiger Moth Tales project, who completed the dates with aplomb. Roll on to 2018 and there’s no stopping the current line-up of Latimer, Jones, long-standing bassman Colin Bass and Canadian drummer extraordinaire Denis Clement, another veteran having been associated with the band for 18 years now.

This tour has been the most extensive that Camel have undertaken since their reactivation, culminating with a return to the Royal Albert Hall in London, a mere 43 years since their last appearance at that hallowed venue. So here we are in Bath with only a handful of dates remaining before ‘The Big One’. I’d heard reports that the band were well drilled and on point, but nothing prepared me for what an outstanding performance this would turn out to be. From the taped intro of Aristillus the band were comfortable, confident and clearly enjoying playing together. The sound was superb, hats off to all concerned as the levels and balance was spot on and crystal clear. Without a word the whole of the majestic Moonmadness album unfolded before us in the first half, culminating in a blistering version of Lunar Sea, probably the best I’ve ever seen. Jones’ contributions are immediately apparent and the band seem lifted by his talents, there’s a clear bond and they seem to realise the depth – in keys, vocals and saxophone – that Pete brings to his role. The playing from everyone is simply superb, Bass dexterously nailing down the bottom end with a wonderful tone and adding some lovely vocals, Clement injecting power when required while deftly adding detail, and above it all Latimer, ringing every ounce of feeling out of his instrument in a masterful performance that had me spellbound. 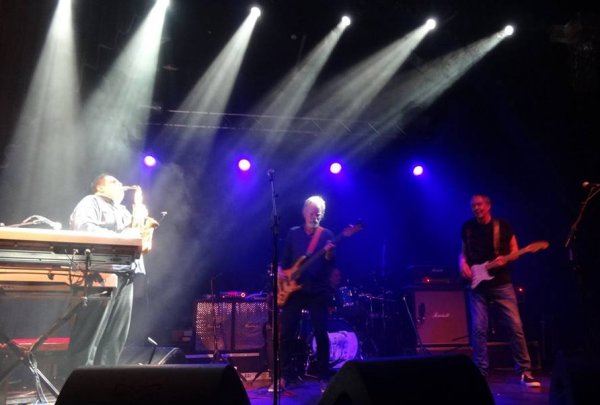 After a brief interval we’re back for a second half that kicked the show into the stratosphere. It was just astonishing, the band moving from pinnacle to pinnacle in a dynamic set that took in some of the finest moments of later albums, skilfully accented with some older classics, the band comfortably negotiating the twists and turns whilst adding a new spin to some of the material – I for one had never contemplated the funky edge now given to some of the material from Dust and Dreams – and it works a treat. End of the Line was retooled to such an extent that many thought it was a new number, Pete taking the lead vocal here and on a couple of others and bolstering the three-part harmonies to glorious effect. There’s even space for one of his many party 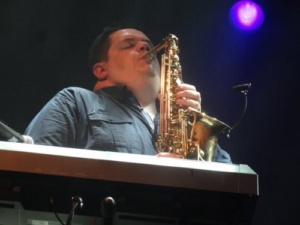 pieces, playing sax and keys at the same time. The man is a master of his craft and in Camel he has found an outlet that suits his prodigious talents, long may the association continue and hopefully many more people will be turned on to Peter’s phenomenal skills.

No screens or extravagant lighting this time, but they were not missed. The interplay between the band was superb, but ultimately we have to return to Andrew Latimer. Every time he stepped forward to take a solo I was on the edge of my seat, not least during Ice which genuinely reduced me to tears. I don’t often get this gooey at a gig but there’s something special about Camel, and Latimer in particular. I have honestly not been so enthralled by a performance for many years and this was without doubt the best Camel show I’ve seen in 35 years of fandom. Beautiful, engaging, highly skilled but speaking to the heart, for me this one was just about perfect.

With a dig into the archives for a blazing Lady Fantasy crowd pleaser to finish, the band absorbed the adulation and I was left spent, exhausted after a roller coaster of a show that had ticked all the boxes, and added several new ones. Magnificent.

But the evening was not over, and getting the opportunity to meet the band afterwards was a dream come true. I’m told that I didn’t make a gibbering fool of myself when talking to Andrew, I can’t confirm whether this was actually the case…

For anyone heading to the Royal Albert Hall next week, you’re in for a very special treat. 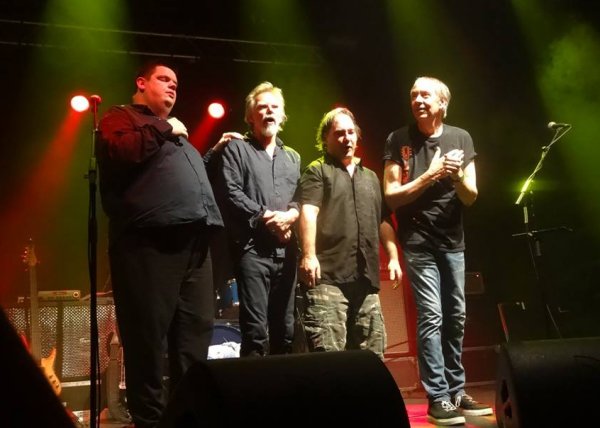 [No photography allowed in Bath so all images are from the Leamington Spa show on 9th September, courtesy of Mark Busby Burrows and used with his kind permission.]