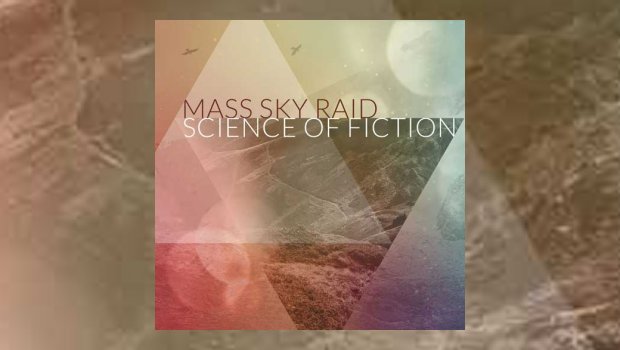 Mass Sky Raid, like Karnivool, are an Australian progressive/alternative rock band, and the similarity does not end their, as musical there is a close likeness to Karnivool, which is a great thing, but they also share the production skills of ARIA award-winning producer Forrester Savell, (Karnivool, Shihad and Birds of Tokyo).

Formed in 2011, they released their debut EP Courage Under Fire in 2013, and Science of Fiction is their first full length LP. Mass Sky Raid is from Australia’s Gold Coast, on the other side of the continent from Perth’s Karnivool, but Adam Lomas’s voice, sounds uncannily like Karnivool’s lead singer Ian Kenny. The band’s music is different, but you can definitely hear some similarities.

Chemical Design opens the album with Adam Lomas singing, “Am I the alien that’s separated, under this satellite, under the covers of the sky?”, as if Karnivool never left the stage, but with even more energy. Powerful electric guitar, deep bass and blasting drums illuminate the song, one of the album’s best and a great igniter. Closer keeps the fast pace and roaring guitars, another energetic hit full of sky high electric explosions. At times they are musically even more powerful than Karnivool musically, while in their quieter moments Lomas’ vocals sound so much like Ian Kenny, you’ll swear it’s him.

Delirium slows the momentum at the opening, but the pace picks up as the slashing guitars pounce, then bounce around Lomas’ vocals. Another of my favourite songs, the guitar solos are worth the price of admission alone, but the bass and speed drumming are fantastic. Dream starts nice and slow with cool keys and electric guitar. This song would have fit perfectly on Karnivool’s Sound Awake. It has the memory of Simple Boy’s rhythm and harmonies all over it. With the soft-spoken vocals it’s the best song on the album.

Edge of the Unknown also has a wonderful slow keys and guitar opening, Lomas singing, “Have we gone to the edge of the unknown? To the places that we evolve. Stars become miles away… It’s the science of fiction. Turning science to fiction”. The album title becomes the refrain – excellent. Enemy is another powerful guitar rocker while Mirrors has a very cool keyboard opening until running bass and electric guitars take off with drums. Each song is becoming a “mirror” of the last.

Ocean has a fantastic name of promise, with great lyrics, full of energy: “The wait is over. I’m holding the pieces in my hand. Taking this path until the end. Now I face and I’m not afraid, afraid of dying”. The ending keyboard is another wonderful musical element. Lomas singing “Have we cone to the end? Can we stay alive underwater? We’re closer now, but I’m feeling us falling” opens Sacrifice. It is starting to sound repetitive, but the music is still full of energy. Closer Turkey is another power run for the guitar, with bass and drums pumping full steam ahead.

This is an excellent album full of guitar power and wonderful vocals. Mass Sky Raid is not Karnivool and their music has even more energy than their cross-continental mates. Get this album and enjoy more of their alternative sound and power.