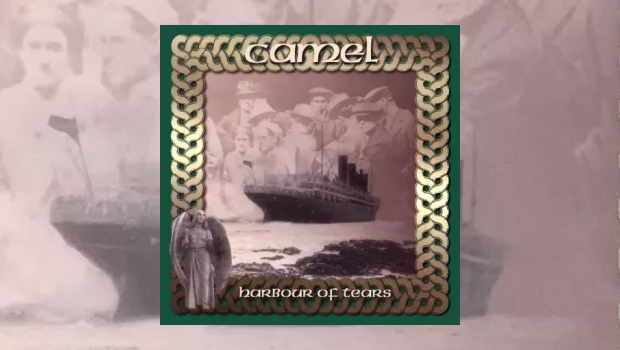 To mark Camel’s 50th anniversary I thought I might use the opportunity of this particular landmark to take a nostalgic look back at one of Camel’s finest moments, and a personal favourite album from their catalogue, Harbour of Tears, released in 1996 and celebrating its 25th anniversary in 2021.

“Cóbh Harbour is a beautiful deep-water port in County Cork, Ireland. It was the last sight of Ireland for hundreds upon thousands of fractured families who departed her shores for fates unknown. They called it the Harbour of Tears.”

The seaport on the south coast was a departure point for many Irish families suffering starvation during the Gorta Mór (Great Famine) of the mid-eighteen hundreds, reported to have claimed millions of lives. The port’s sad history would be immortalised when, on 11th April 1912, RMS Titanic sailed from Cóbh harbour (then Queenstown) to start her maiden voyage to New York.

Before undertaking this review, a little insight into my discovery of this album (no home internet in those days). I had followed Camel from their eponymous debut in 1971. Fortunate enough to catch them on The Snow Goose tour, I continued to purchase their ’70s studio releases, Moonmadness, Rain Dances, Breathless and I Can See Your House From Here, but somewhere along the line I lost touch with Camel. By chance, and whilst perusing the folk section in a local record shop (oh how I miss them!), I picked up Harbour of Tears. Along with a couple of other albums I went up to the counter and whilst handing over the cash I quizzically inquired “Folk?”. “Apparently so”, was the reply, followed by a knowing grin.

Home, CD into the player… and as Mae McKenna’s pure and wonderfully evocative a capella delivery of Irish Air emerged from the speakers I was both smitten and intrigued.

“In this quiet place I stand alone,
From my homeland far away.
And my empty heart cannot recall,
The forgotten dreams that brought me joy.”
“Had I ways to shed the wasted years,
I would travel to my kin.
And with strength and faith in God above,
There in Ireland I would gladly die.”

Beautiful… and as it segued into Irish Air (Instrumental reprise), with lamenting flute and harp like sound, I mused – was this really a new direction from Camel? Albeit short lived as Andy Latimer’s silky guitar tones soon burst from the speakers and we were back in familiar territory.

The storyline moves forward with the title song, the vocals full of tragic pathos as the young man and his brothers set sail. To this day I struggle not to be struck by the emotional beauty of this track, one of Camel’s most powerful vocal passages, and Andy’s guitar is achingly sympathetic. The brief orchestrated Cóbh, with haunting clarinet and rich choirs, acts as a powerful link to the next stage of the journey.

As the choirs subside, a wonderful pulsing string arrangement depicts the brothers’ plight, as they have now reached their destination a year or so after the journey began. There’s a brief transition with oboe before we have our first introduction of the drums. So powerful has been the music that you scarcely notice the absence of the drums until they appear. They do not stay with us for long, but whilst here they serve well the touching solo from Andy, and as they disappear we move into the brief, mournful guitar section that is Under the Moon.

Under the Moon marks a transition in the album, and following this the tempo is slightly raised and a driving beat sets the scene for Watching the Bobbins. It is noted that Andy Latimer’s grandmother was one of those expatriated, and I imagine this is a tribute to her struggles; a young girl saving every penny she earns to buy her freedom.

In my opinion Andy’s outro solo here is one of his finest, and that’s saying something…

Following this there’s the briefest of gaps, the first on the album and extremely effective too, as we transition via the anthemic Generations into the folky acoustic Last Eyes of Ireland, which sees our main character reminiscing about her homeland…

As the penny whistle fades we glide into the many-faceted instrumental Running From Paradise, which reprises themes from across the album and acts as a link to the family’s Irish heritage, their lives away from home and a precursor to the end of the journey. Andy’s flute work is delightful here and a reminder of what an accomplished flautist he is. Following this skilfully written and rather uplifting passage we move to the aptly titled End of the Day, which supplies the journey’s final poignant lyric:

The album nears conclusion with Coming of Age, which as a side note would become the title of the Camel’s 1998 live release, where they performed Harbour of Tears almost in its entirety. The studio version of Coming of Age is one of Camel’s most adventurous arrangements, bold, dynamic, full of thematic passages and immensely powerful. Surely a fitting conclusion to the album. There is however one more tune to go, and it’s Andy Latimer’s tribute to his late father. Perhaps as to be expected, The Hour Candle is predominately a minor key blues tune which eventually refrains the album’s main theme. The album is bookended with a reprise of Mae McKenna’s a capella Irish Air, this time drenched in reverb and accompanied by waves on the shoreline.

Despite the album’s sorrowful tale, which is magnificently captured by the music and lyrics, somehow I always feel uplifted after playing Harbour of Tears. A truly wonderful album.

Recently, Camel announced a series of UK dates in 2023 to mark their 50th anniversary, which was not been possible during 2021, the situation remaining uncertain for 2022.