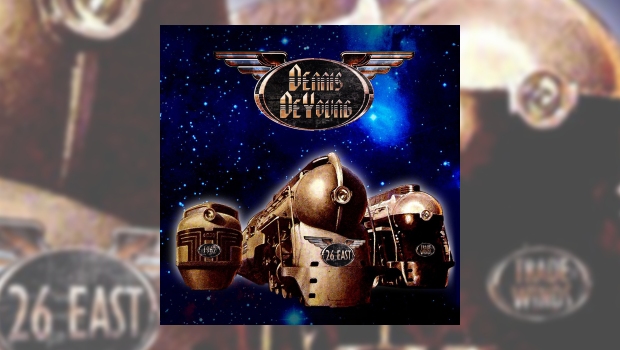 Dennis DeYoung was the voice on much of the talked about Styx back catalogue, which always hinted at progressive rockiness with albums like Pieces of Eight, Equinox, and the all conquering The Grand Illusion where The Angry Young Man sailed away with ‘Miss America’. By Kilroy Was Here DeYoung had packed his bag and the melodramatic pen was also in the luggage. The stage musical tendency of subsequent solo albums turned back on itself when a series of “Music from Styx” shows steered a course to this alleged swan song (well part one of) stab at a sound more akin to his former employers.

This sprightly 73 year old has teamed up with Jim Peterik of Survivor fame, who co-wrote pension securing hit The Eye of the Tiger and is on board for 26 East, Volume 1 and is the perfect writing partner for this singer who is at home with the histrionic, hook heavy, and dramatic beasts of a ditty.

Referencing 26 E. 101st Place, the Chicago address where DeYoung grew up and from where Styx was formed after a meeting with the Panozzo brothers (Styx’s rhythm section), and indeed the album cover depicts them and DeYoung as trains sweeping out of the stars.

Those hoping that a return to the halcyon sounds of the former glory will be partly impressed as the word “amalgam” sums up the new direction. East of Midnight, however, is right on the button with a classic huge beginning and instrumentation that includes a church organ and a full on rock stomp. DeYoung, of course, was the main keyboard player too and his influence on the synths definitely shone the Prog light on many of his former band’s pétillant best.

With All Due Respect is (with all due respect) a bit of a throwaway and does somewhat suppress the opening squall, but the locomotive is back on the rails with A Kingdom Ablaze, a modern production with a fat choral motif. The background lead guitar and the keyboard twiddling build to a very AOR bombardment that kicks the rock back into place. The choral chant returns and this is one fine track.

DeYoung’s voice has lost none of its power over the years and You My Love wouldn’t sound out of place in a rewrite of Grease, and whilst some might want to clean their teeth to rinse the sugar away, there is something very charming about this song.

The spirit of Foreigner, with the ‘dun dun dun’ piano give Damn That Dream a place on the next Jeremy Clarkson Presents The Best Driving Album in THE WORLD Ever! album as seen in a service station near you, and following Whitesnakey Unbroken might also slip onto the disc for that time when the turbo button isn’t required.

Once you’ve bought into this album and remembered Dennis DeYoung’s ways and means by The Promise of this Land it’s all lighters in the air (or phones) or not in these modern times. Beginning like a child friendly Disney film’s thought provoking philosophical ballad, maybe sung by a small dog on a quest, the then prominent synths, punching the air snare shots, and gospel ending big it up to the pomp we know so well. This song sums up the album in so many ways, we’re not talking prog in the traditional sense but it is aimed at a certain age group who still keep that outfit in the wardrobe but will never fit in it again. The backing vocals and the optimism glisten throughout, but it won’t be everyone’s choice of fizzy American beer.

There’s something-Lennon like in the piano intro to To the Good Old Days which makes perfect sense when it’s discovered that the duet is with Julian Lennon, not so much Beatle-esque, more Beatles The Story, again sung very much from the stage to the swaying audience of now socially distancing butts on seats, whilst A.D. 2020 is a sweet little homage to the Paradise Theater album which might or might not tie into forthcoming Volume 2.

Anyway, so endeth the lesson with the closing curtain and bow as we await the points to change and we are on track towards the second half, hopefully in time for the discovery of a Covid vaccine and an actual real life audience to witness a live version of all who have thrown coal into the firebox.

This is adult orientated rock which works across all genres and eras, it is an album for anyone who had an eight-track player in their Buick blasting Journey or REO Speedwagon on dusty desert roads, and then the female hitch hiker changes the cassette for a little extra sophistication (AM Rock of course) with just a hint of schmaltz. Give it a try.