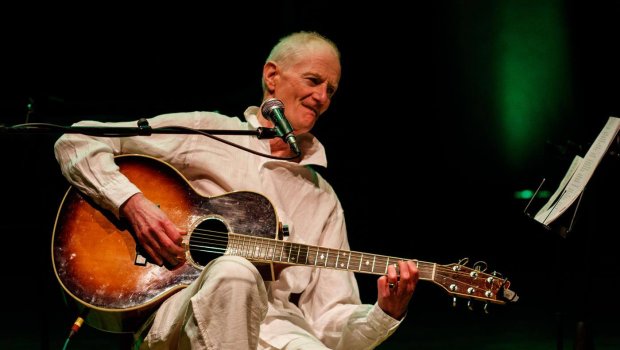 Having been back from the sunny, warm climes of Venice for a week now, Monday 30th April saw yet another grey and bloody cold, but at least thankfully dry day in the middle of England for our trip for the few miles east out to Cambridge, a city famous for being one of twin hubs of elitist education in our not-so-fair Sceptred Isle. It is also home to a long-standing and rather fine two-room music venue, The Junction, handily situated at the end of an entertainment arcade full of chain eateries of various kinds, to suit the palette of most travellers, who now arrive through the maze of Cambridge’s city streets without mishap only thanks to the modern wonder of satnav. This place used to be a bugger to find back in the day!

Meeting up with gigmates (this should be a new entry in the Oxford English dictionary) is one of the pleasures of modern gig going, enabled by the main positive aspect of social meeja. Drinks were quaffed and nattering was natted while we waited for the scheduled 7:45pm entry into the cosy all-seated J2 room, which I guess held around 150 eager punters.

Awaiting us on the stage was a concert grand, top open and suitably miked up, the piano bench, and an acoustic guitar on a stand, with a chair for the guitarist, and a couple of microphones awaiting the now calmer declamations of one Peter Hammill, our host for what turned out to be an evening of musical splendour. 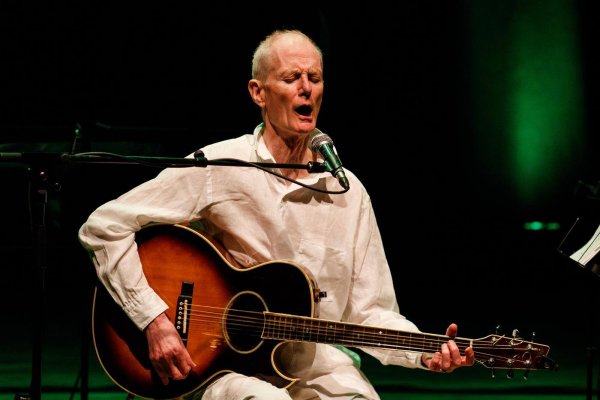 At 8pm prompt on wandered The Thin Man, attired in his now customary and slightly crumpled all-white outfit, comprising a long and loosely fitting shirt, and a pair of comfortable trousers, both in thin cotton, and both flowing around Peter’s sparse frame akin to sails on a near-becalmed sailing dinghy in the middle of a motionless lake.

With the briefest of “Good evenings”, Peter sat down at the piano and launched straight into a necessarily stripped down version of My Room (Waiting For Wonderland) from Van der Graaf Generator’s Still Life, the second of a trilogy of albums from the latter-half of the 1970s by his visceral band, a triptych that were it not for King Crimson’s Lark’s Tongues In Aspic/Starless and Bible Black/Red would have no equal amongst its contemporaries. That this song in its solo format fits in seamlessly with Peter’s own work, tonight ranging from the beginning (The Birds from 1971’s Fool’s Mate) right up to two songs from last year’s fabulous From The Trees serves as evidence that Peter Hammill is probably alone among his contemporaries from the original bands that begat prog who is still producing relevant and necessary music. You can never have too many dissections of the human condition after all, and who better to deliver them than simply the best lyricist of his peers?

The set as I said was taken from the entire span of Peter’s large body of work, and consisted of 18 songs from 16 albums across the passing of 47 years, so it is not surprising that he had lyric sheets on hand, as “one tends to forget the words”. The music however was all played from memory, and occasional angular stabs at the piano keys, or energetic dissonant attacks on the strings of his guitar added to the frisson of the evening. There was electricity in the air, feeding off the nervous energy of Peter’s performance. 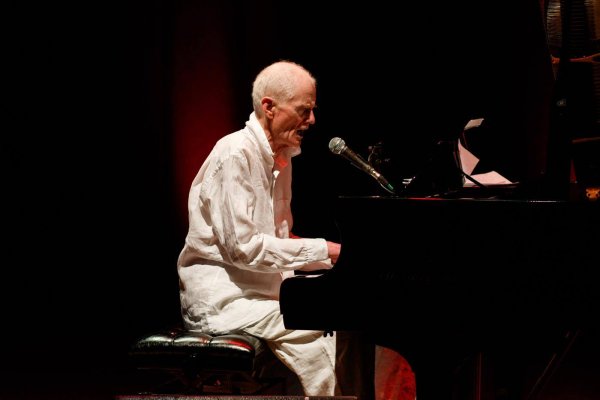 Being fresh in the mind, the versions of the two songs from the “new” album – From The Trees, which came out in typical contrary fashion in the graveyard month of December last year – were familiar, and delivered in fine fettle. Reputations in particular was very memorable, and along with That Wasn’t What I Said probably as close to jaunty as Peter gets. These songs are evidence that his current work over the last four albums is as good as anything his solo career has produced thus far, and Peter’s muse shows no signs of running out of steam just yet!

Other highlights, both from the “guitar” section of the set were Skin, and the gut-punch of Patient; “raging at the illness, when the rage may be its cause”. He hits his guitar so hard it’s a wonder it didn’t break. The second “piano” set had some special moments too, a marvellously defiant That Wasn’t What I Said bringing a smile to my careworn fizzog.

The only album apart from the latest one to have two songs played from it was Singularity from 2006, an album I do not (yet) own. One of those was the quite remarkable ode to the negation of responsibility that is Friday Afternoon, a song that ends in a drunk driving death. Peter follows this with one of his few brief chats to us – “Not all my songs are that pessimistic, some are optimistic. We’ll end with one that straddles the fence” (I paraphrase). And so we end on a more upbeat thought with Better Time, from 1996’s X My Heart, which with its “I’ll never find a better time to be alive than now” probably sums up where Peter Hammill is at this point in his life. 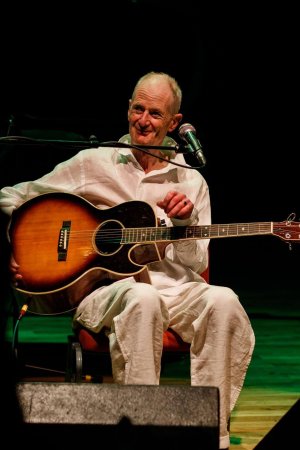 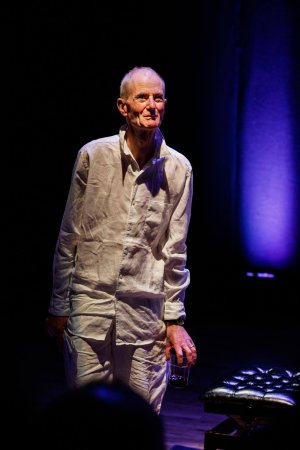 After a brief break soundtracked by thunderous applause, Peter is back for the encore, the always emotional, and possibly more relevant today than it was in 1970 when it came out on VdGG’s The Least We Can Do Is Wave To Each Other album, the mighty tearjerker that is Refugees. Not a dry eye in the house! What a gig!

This was the last gig of this leg of the current tour. Catch him if you can, you won’t regret it.

[PHOTOS – Many thanks to Sean Kelly, who saved my bacon where pictures are concerned!]

SETLIST
Piano:
My Room (Waiting for Wonderland)
Easy to Slip Away
Too Many of My Yesterdays
Reputation
The Unconscious Life
Guitar:
The Comet, The Course, The Tail
Our Eyes Give It Shape
Once You Called Me
Skin
The Birds
Patient
Piano:
Faculty X
That Wasn’t What I Said
The Descent
A Way Out
Friday Afternoon
A Better Time
~ Encore:
Refugees