A quick question about gig etiquette: Is it ever acceptable to stand at the edge of the balcony and shout at the band in mid-song because you can’t hear them properly?

That’s what one irate gentleman chose to do during Big Big Train’s gig at the Cadogan Hall last night.

What did he expect the band to do – stop playing, grab some sledgehammers and remodel the hall?

Ironically, the outburst came during A Mead Hall In Winter, about the exchange of intellectual ideas. “Oi, Newton, speak up about yer Philosophiæ Naturalis Principia Mathematica – we can’t hear you at the back!”

True, the sound in the galleries was pretty ropey – all drums and bass with very little vocals, guitars and keyboards. Even Genesis legend Tony Banks thought so. With all the anticipation for these gigs (I bought my tickets a year ago) and people coming from all over the U.K. and beyond, it’s fair to say that the sound issues came as a crushing disappointment to many, but thankfully the sound improved for the second half and, apart from a few issues with Rachel Hall’s violin, it was the only jarring moment in an otherwise near-faultless return to live work for the eight-piece.

Back in 2015 BBT made their first live appearance in 17 years. No-one really knew what to expect. This time round we KNOW they are damn good and can tackle the long, intricate stuff with as much precision and gusto as they do in the studio.

The night kicked off with a haunting violin solo from Rachel that turned into a duet for violin and brass section. Then it was into Folklore, as rousing as 2015’s opener Make Some Noise. Cue standing ovations from the audience, who had been practically wetting themselves with anticipation for this concert.

Folklore was followed by the moving, intricate Brave Captain as photographs of Capt Albert Ball VC were displayed on the back wall screen. If anything, this rendition inspired even more emotion than the album version as we gazed on the fresh-face features of young, doomed Albert. A surprise outing for Last Train from The Underfall Yard was followed by the exquisite London Plane as we were treating to scenes from The Big Smoke, The Great Wen.

Then came the medley of Meadowlands and A Mead Hall In Winter – together as they always should have been –introduced with a dedication to the late John Wetton, who championed the band back in 2009. By the interval we realised that BBT hadn’t repeated a single track from the 2015 concerts. So was the second-half going to be chock-full of old favourites?

Apparently not, as Experimental Gentlemen burst into life, with David Longdon doing his best Peter Gabriel impersonation. By now the sound was audibly better. It was pretty good anyway in Row K of the stalls but now it was fuller, more powerful and less dominated by Nick D’Virgilio’s powerhouse drums.

As if to remind us that BBT have a huge back catalogue to draw from, they dug out Swan Hunter from English Electric, Pt 2, and what a beautiful song that is. Almost made up for them snubbing Curator Of Butterflies. A powerful Judas Unrepentant led us into possibly the best performance of the evening – the haunting, glorious The Transit Of Venus Across The Sun.

Two old favourites – East Coast Racer, taken at what seemed to be breakneck speed, and a stately, powerful Victorian Brickwork – brought us to the encore. A bit of drum work by Nick took us into a rousing Wassail with all the band returning in pagan face masks.

Big Big Train had more to prove last night. The sound issues certainly rattled them – at one point David Longdon was talking gibberish as he tried to get his brain back in gear and the show back on track. But he was surrounded with exemplary musicians – Rikard Sjöblom reeling off stunning guitar solos with his eyes closed; Danny Manners and Andy Poole providing solid, commanding keyboards; David Gregory a little more intense but note perfect; Greg ‘The Quiet One’ Spawton solid behind the bass and Nick driving everything on with his huge drum sound.

But, for me, the evening belonged to Rachel Hall as she crossed the stage like a Faery Queen from A Midsummer Night’s Dream, providing lyrically violin notes that soared through the hall.

Hopefully by tonight the sound issues will have been resolved and Big Big Train will be heard in their full, uninterrupted glory. 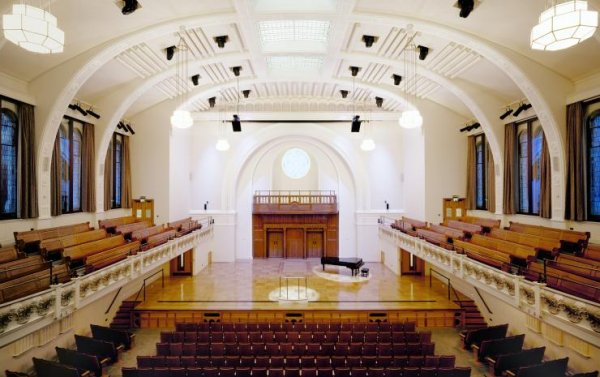