After recently reviewing Nordic Giants’ new album, Amplify Human Vibration I was pleased to get the chance to see them live in a venue not far from my home. So on a crisp November night we made our way to The Globe in Cardiff, a small but interesting venue in the heart of residential Cardiff. Receiving a warm welcome from the staff on the door we entered the venue to find that tonight the balcony area was closed, disappointing for me, being a bit on the short side, but drinks obtained we took up residence on the stairs leading up to the balcony which afforded us a good view.

The audience were probably at around sixty people when the first support act took the stage promptly. With little introduction Koyo, from Leeds, launched into their set. The band, consisting of two guitars, keyboards, bass and drums, assuredly delivered their own brand own psychedelic progressive music, creating some fascinating sonic soundscapes. The music contained bluesy, almost funky touches and at times included an improvisational extended jam feel, they were reasonably tight, playing well off each other. The final song, Tetrachromat (part 1 & 2), was a tour de force which closed with the band creating some controlled sounds and feedback. It is promising to see that young musicians want to experiment and push their music to interesting places; it’s good to see that the future of music is going to be in safe hands. 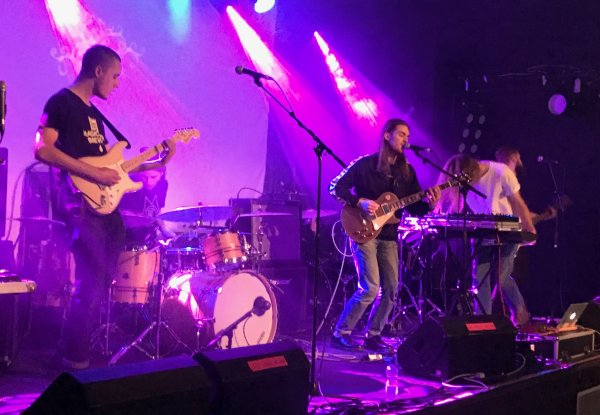 A short break as the stage was got turned around quickly, the audience numbers continuing to increase as the second support of the night took the stage. From Bristol, Chiyoda Ku is a trio who play a powerful brand of instrumental math rock. A bright and powerful start with touches of Primus about their delivery, throughout they displayed, to me, some Nomeansno and King Crimson influences also, although these are only starting points and they have definitely created a sound of their own. With the driving drums creating the odd rhythms and time signatures, the fluid bass work and the guitar providing sharp, stabbing lines and runs, they were incredibly tight and well structured, playing with and off each other. At times they stood in a circle facing each other which gave an organic feel to the music, as if they were in the garage belting it out. I did not know any of the songs before tonight but this did not matter, such was the standard of playing and writing. Another young band who are looking to push their music to interesting places, and as I said before, it appears that the future of music is in good hands. 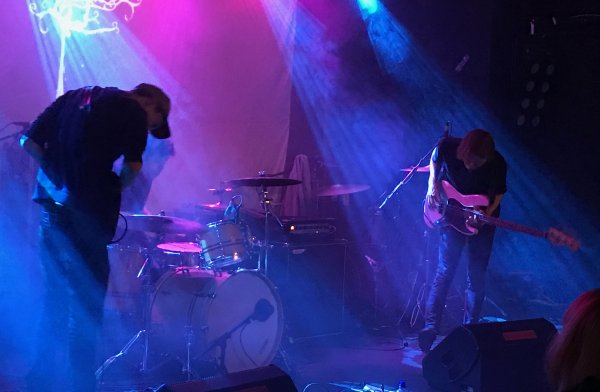 Set List
I’ve Got a Degree and a Bike
Distracted from Distraction by Distraction
Hurry Up, Its Time
Smile You’re on CCTV
Is This What You Wanted
Pretend You’re Happy
Brand Standard Art

The room was filling up now as the stage was prepared for tonight’s headline act, Nordic Giants, and after a short break as they got ready to take the stage the anticipation in the room could be felt. After the intro accompanied by a short film they launched into Taxonomy of Illusions, the music and film coming together as one. With Loki sat at his keyboards on one side of the stage and Roka at his drums on the other, both dressed in feathered head dresses with Roka sporting what appeared to be tribal skin markings, they were divided by the large back screen and a projection box at the front of the stage, with the moody and subtle lighting and occasional use of strobe to complete the effect.

On Illuminate we get the first chance to see Loki play the trumpet, which adds a new dimension to the music, at times doing so one handed whilst playing his keys with the other. This is followed by an amazing version of Little Bird on which it is Roka’s chance to shine on bowed guitar, which creates some wonderful atmospherics. 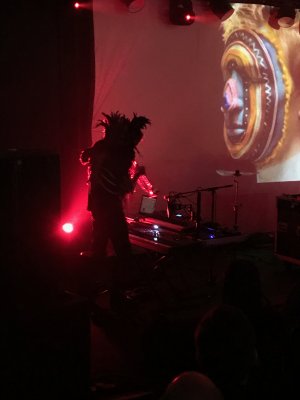 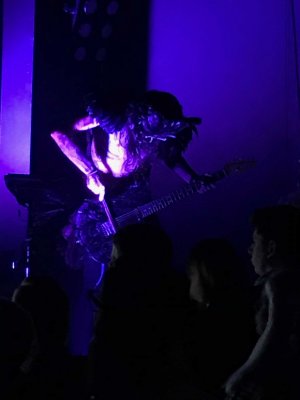 The whole experience of the Nordic Giants is one that affects the aural and visual senses, the music accompanied by specially chosen film; sometimes there were unsettling images, Dystopia for example showing images of a bank robbery and kidnapping, which often seem to be a counterpoint to the music. All this is tied to the band’s visual look, the careful lighting of Roka on his drums with strobe making him look like a Native American medicine man in his movements when striking the drums. As the concert reaches the song Spirit there appears to be a shift in the filmic images to a more positive outlook. With the words of Martin Luther King on Spirit the band give an amazing performance, full of emotion and feeling which is carried over into a powerful and evocative Imortal Elements, which is one of the highlights of many in the set, and then it’s all over.

The band return to the stage to the recorded reading of a poem, sadly I failed to catch the title and author, before they introduced the encore as Autonomous which is accompanied by a film of a protest installation before the G20 summit. This was a powerful film which was mirrored perfectly with the grand cinematic sweeps of the music, along with its climatic finish.

With a set list drawn from all of their albums, the older songs are chosen well to sit among those from Amplify Human Vibration. The Nordic Giants are quite an experience live, taking their recorded output to a higher level. The audio and visual experience can be one of a personal nature, which probably reaches each and every person in the audience differently, so I therefore have not stated my feelings, you need to get out there and absorb it all for yourself. Suffice to say that this was an excellent and thought provoking gig, with Roka’s drumming nothing short of marvellous and Loki’s wonderful keyboards providing a great example of stage craft and entertainment. Couple this with two great young bands with lots of promise in support, what is there not to like? 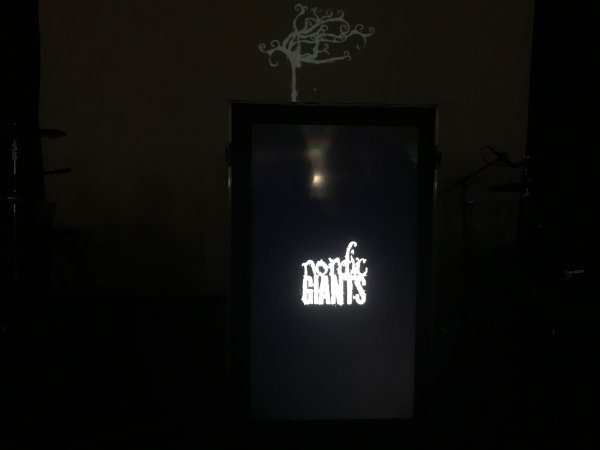