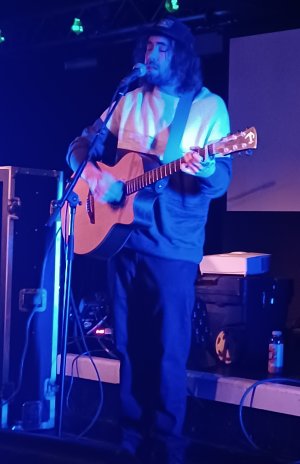 Gigs like this seldom happen in Swansea – and I nearly missed it as I only found out about it the night before! Thanking my lucky stars, I headed down there…

Upon arrival, support act Alex Hedley was already on, just him and his acoustic guitar, running through a collection of very nice self-penned songs, plus a fine cover of Neil Young’s After the Goldrush which fitted the tone of the set perfectly. It really was lovely, Alex’s keening voice delivering songs that were highly listenable and very enjoyable, with palpable emotion. He might be slightly incongruous as a support act for this particular headliner, but he did well and received a good reception from an audience that clearly took to what they heard. But more of Alex later…

Nordic Giants have honed their particular brand of post-rock over the past decade or so, creating soundtracks to some thought-provoking and fascinating short films. The word ‘cinematic’ is glibly passed around in post-rock circles, but the Giants are certainly deserving of it, their expansive and epic sound more than fitting that particular bill.

The enigmatic nature of the duo is enhanced by the presentation. Settling into the gloom at each side of the stage, they face each other, the masks, feathered headdresses and body paint setting them strangely apart. 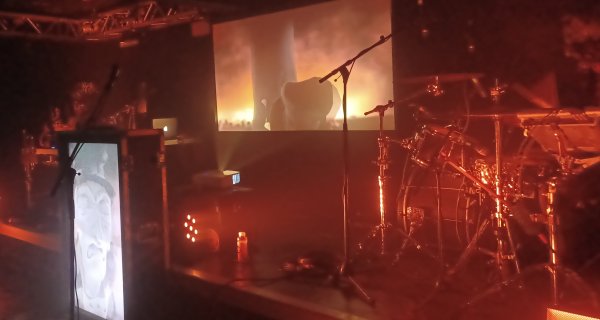 They don’t speak, they just appear – as if beamed in from some mythical netherworld – do their extraordinarily detailed and beguiling thing and depart with a bow, leaving an audience that has been satisfactorily battered by the audio visual assault on the senses. The lights are stunning, the overall effect unlike any other band I can think of, every moment bringing intrigue, and with the best view of them performing that I’ve ever had (mostly of drummer Rôka as Loki and his keyboards remained slightly obscured on the far side of the stage from my viewpoint) I was conflicted on whether to watch the visuals or the performance. Both are worth full attention. 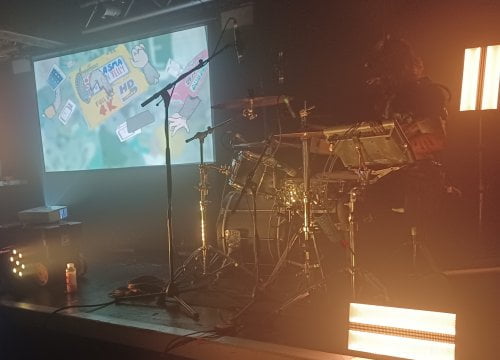 The dual screens at front and back of the stage work together at times while being complementary at other, the music wrapping itself around the films to make them even more visceral. The combination is ramped up further by extracts from speeches and lectures that cut through to deliver a damning treatise on the failings of modern life. The message is not one of hope but a stark reminder that many clocks are ticking, and continuing to ignore them will only end one way. 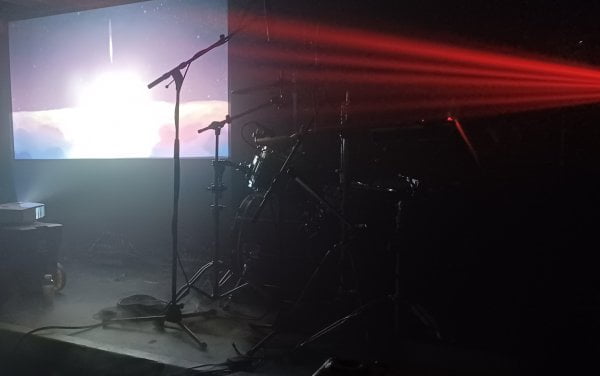 The driving nature of the performance, and the quality of the sound – which did a fine job of rearranging my internal organs as I leaned against the bass cab at the front – made for a compelling spectacle, and the duo threw themselves into it, triggering the samples and additional sounds that enhance the performance of their own live parts. Rôka occasionally left his kit to deliver bowed guitar from the edge of the stage, adding another layer of ethereal goodness. 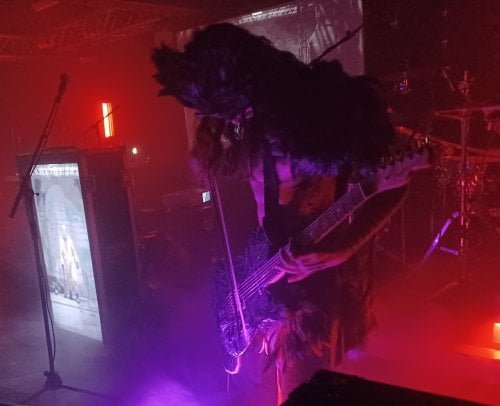 The combination of lead piano and pounding drums at the core of the music give it real heart, a haunting and organic centre to the often sci-fi and mythologically fuelled spectacle.

It’s a great advert for the quality of the filmmakers too, as it’s unlikely that most of these works would be seen outside very select circles otherwise, and every last one of them is worth seeing. Whether live-action or animated, sci-fi or horror influenced – as in Faceless, which sees the return of Alex Hedley to put in a bravado performance of the wordless vocals he delivered so beautifully for the album version – or just plain funny, at their best they are both entertaining and profound and this is one of those evenings where you come away with more than you had when you went in. 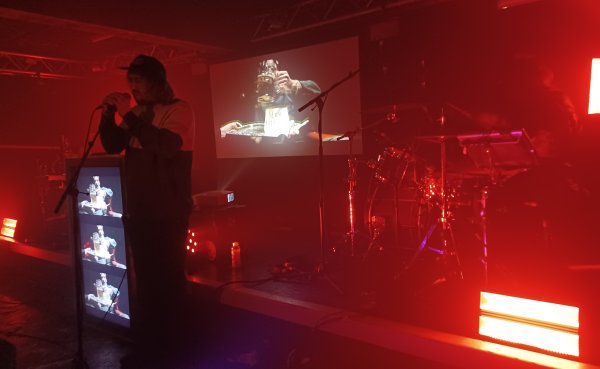 This short tour, of which tonight was the first date, is to support the Symbiosis album, released early this year. The shows are sure to shine light into the dark places of a number of towns, and those who get to see it are very lucky indeed.