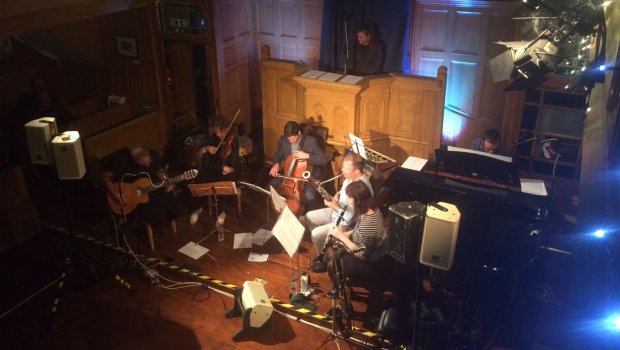 Well, that was just magical.

In the beautiful setting of Acapela Studio, in Pentyrch, north of the M4 outside Cardiff, the North Sea Radio Orchestra beguiled an audience that couldn’t have numbered many more than 100 with their shifting tapestry of exquisite music. Led by Craig Fortnam, they moved effortlessly through a set taking in pieces from all four of their albums to date, including 2016’s Dronne.

As seems fitting, following on from NSRO’s long history of playing in religious spaces, the Acapela Studio is housed in the former presbyterian Capel Horeb, dating from 1835, the wooden floors and interiors creating a wonderful resonance that lifts the music as it fills the high ceilinged hall. There are individual tables for much of the audience, but those of us sat in the hard pews were grateful for the cushions provided. The welcome was warm and the beer delicious, and there is also a pizza oven on site, all adding to a friendly and relaxing experience, perfectly complemented by the beauty of the music presented.

After working with others in the Cardiacs orbit, Craig and Sharron Fortnam formed North Sea Radio Orchestra in 2002 to perform Craig’s more classically inclined compositions, using Sharron’s voice, a blend of traditional and contemporary styles, to create an uplifting and engagingly melodic hybrid: it isn’t classical, it isn’t rock but employs elements of both alongside folk and world influences. The earlier albums provided musical settings for poetical works by the likes of Blake, Tennyson, Yeats and Hardy, but in recent times the words have mainly come from the Fortnams themselves. 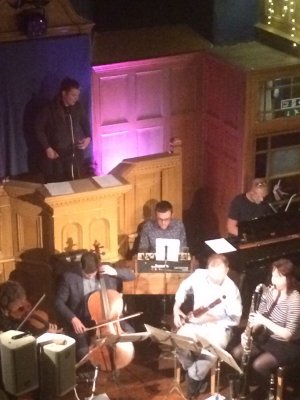 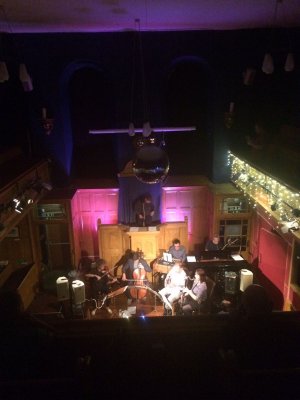 With an ensemble that has in the past ranged from two to twenty players, tonight we have a septet taking in guitar, violin, cello, bassoon, clarinet and keyboards, Craig’s phone acting as unofficial eighth member to provide rhythm tracks for a couple of the pieces, some of which are instrumental, taking in various groupings of the available musicians, but Sharon’s beautiful singing is featured prominently throughout, sometimes in duet with Craig, who himself alternates between his main instrument of guitar and the piano. The overriding feel is of 19th Century Romanticism, but this does not tell the whole story as elements of Cardiacs and other influences drop in and out serenely to produce an intriguing sound that is all its own, the idiosyncrasies of James Larcombe’s unorthodox keyboard lines adding an abstract quality.

From the opening Hole in the Sky, where Craig’s guitar duets with cellist Harry Escott, into The Wound with Sharon’s voice entering for the first time, singing Thomas Hardy’s words from the pulpit above the players, the set progresses through a variety of instrumental combinations, including the woodwind introduction to the more rhythmic Berliner Luft which segued into The Earth Beneath Our Feet via Morpheus Drone, with local guest violinist Naomi Thomas taking the lead, the rousing sound of the whole ensemble playing together making for a completely absorbing performance, immaculately delivered and magnificently refreshing. Each musician had the opportunity to shine but within the group setting rather than solo, and this gave the evening a warmth and wholeness, all of the contributions clear within the inspiring arrangements. Above it all, Sharon Fortnam is a thing of wonder, the settings favouring the unusual facets of her strong and clear voice, delivering the words to glorious effect. 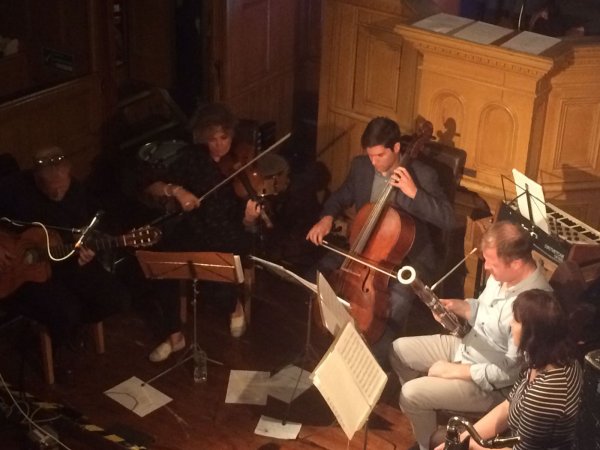 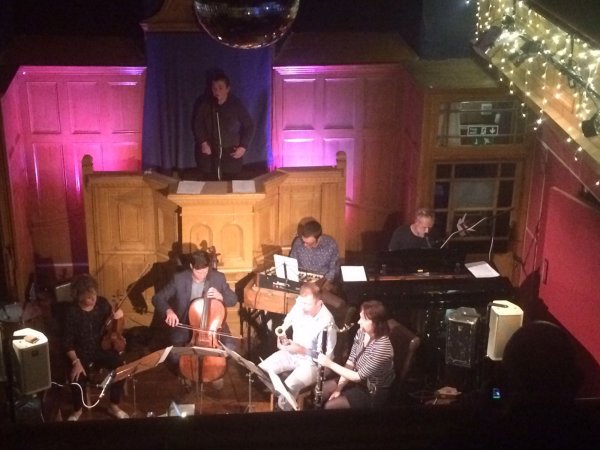 The shifting textures of Dronne‘s Vishnu Schist was a highlight, as was Alsace Lorraine which ended the first set, separated by a captivating reading of the hymn When Floods the Tempest High, which had been requested by Craig’s father, who was present.

The sound and view was spot on from anywhere in the hall. We stayed downstairs for the first half, moving up to the balcony during the interval where about 15 of us sat for the second set, with plenty of space to move around for different vantage points, the music rising beautifully to the upper level. This set began with the woodwinds getting a solo introductory piece, Luke Crookes’ bassoon and Nicola Baigent’s clarinet complementing each other to fine effect. The music ebbs and flows, rises and falls and is completely captivating throughout, Sharon and Craig (at the piano) dueting on a brittle When Things Fall Apart. After two pieces from the Birds album, Morpheus Miracle Maker is another wonderful showcase for Sharon that builds into a sweeping ensemble, woodwinds leading into strings and a marvellously enigmatic second half. Not of any genre specifically, just gorgeous.

Kingstanding is a wistful piece, guitar and organ setting a pastoral scene that easily brings the English countryside to mind, before a more strident Heavy Weather ends the set to rapturous applause. It’s been a great set showing all of the intricacies of NSRO’s repertoire, and with Craig intimating that there is no need for the faffing about of leaving the stage only to be called back for more, positions are re-taken for the encore of a majestic Personent Hodie from Birds, underlining Craig’s Renaissance influences from the works of John Dowland and others, and finally an uplifting He Wishes For The Cloths Of Heaven sends everyone home on a cloud. 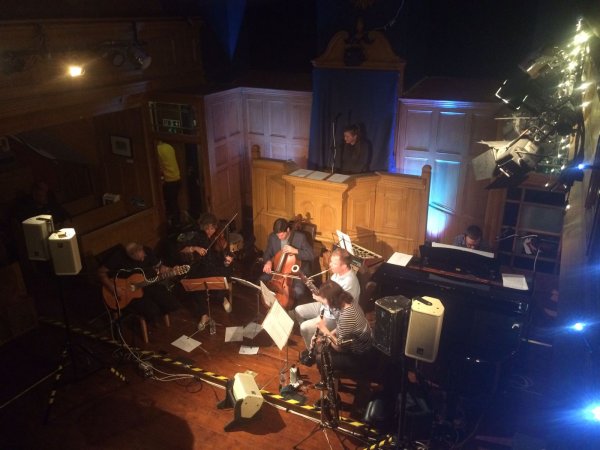 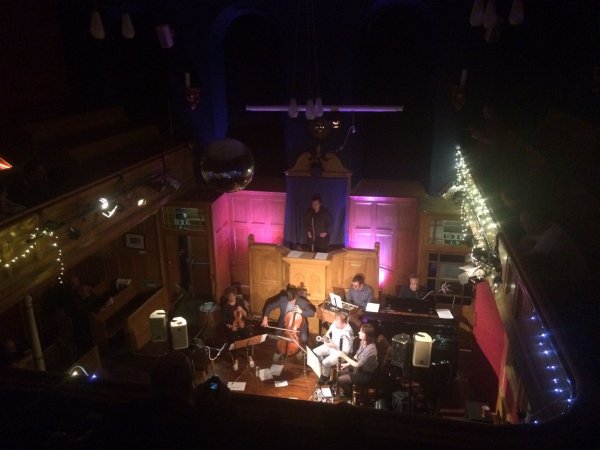 A haunting and otherworldly experience throughout. Craig introduced some of the pieces, others merging into the next and throughout the audience was rapt and silent. I found myself being drawn into the music and fully absorbed in a way that doesn’t happen very often these days. At one point I noticed a tear rolling down my cheek, must have been something in my eye…

At the end I felt more relaxed than I have in ages, uplifted and cleansed. This was a very special performance of organic music performed in a space that was designed for just that purpose, and if you get the opportunity I urge you to catch one of NSRO’s sporadic live performances, the next being a matinee show with the inestimable Mr. William D. Drake supporting, in London in November.