I was in a church the other day, St. Anne and St. Agnes, Gresham Street, in the City of London, near The Barbican. I was there to see the North Sea Radio Orchestra and their support, William Drake. Luckily, I did not burst into flames, always a hazard that can detract from gig enjoyment. There’s a hint of exclusivity to the proceedings, aided by the fact that this is no ordinary gig venue and these are not ordinary, mainstream performers. It’s all a bit “underground”, almost clandestine.

Nevertheless, the relatively cosy venue was packed with perhaps as many as 250 people, and I mean packed. The seats were laid out on a flat floor, pretty much on the same plane as the artists so, being in the shortest percentile of the TPA staff, nay, adult humans, I’m afraid I couldn’t see much. I’m not sure being taller would have helped. Within the church, designed by Sir Christopher Wren, the room itself has a rather square footprint and the ceiling is so high that the space feels somewhat cuboid, despite its upturned-concave ceiling. Unfortunately, this doesn’t help with the acoustics.

I confess, I am new to William Drake’s music but I had it on good authority that I’d enjoy his set. I was not disappointed. Reading from what appeared to be his hand-written book of lyrics and sitting at a beautiful baby-grand piano, Mr. Drake started with a song which I felt was reminiscent of a good television sci-fi soundtrack.

Sometimes medieval, grand and pithy, sometimes cinematic, we were subjected to jaunty instrumentals and busy polyrhythmic sounds that merged beautifully. It was a shame that the vocals were often relegated to a muted third instrument because I have no doubt that with his music, so well thought out, the words could only have added to the overall affect. I wasn’t aware that there was any kind of front-of-house sound engineer but despite this, William’s voice, with the timbre of Peter Hammill infected with just a hint of Shane MacGowan, began to cut through during the latter part of the set.

The little ensemble went on to play some complex yet accessible music. The piano was at times beautifully complimented by Nicola Baigent’s bass saxophone and throughout it was subtly underpinned by the higher frequency hurdy-gurdy drone. Despite the hall’s acoustics and it being somewhat masked by the pianoforte, the hurdy-gurdy was used to good effect. James Larcombe’s skill on this seemingly anachronistic instrument made a definite contribution to the overall sound – even if it was a bit far away. Importantly, as James later said, rather magnanimously, when I spoke with him after the gig, this really wasn’t about him.

The audience, reverent, polite yet enthusiastic, gave much deserved energetic applause before a brief token exit stage left and the return for an encore which, for me, was as good a pop song as any.

I also cheekily interrupted the lovely Nicola Baigent afterwards as she wound down from one set and began preparation for the next. She graciously handed over a hand-written set-list. Analysis shows it to be written in the ancient tongue of ‘General Practitioner’. I intended to type it up as I saw it, despite my personal inadequate proficiency in that noble language, but luckily Mr. Drake himself answered my request through a well-known social medium.

I thoroughly enjoyed my trip to the borders of the avant-garden and all-too-brief flirt with this music and I think I’m looking to forming a new relationship with it! 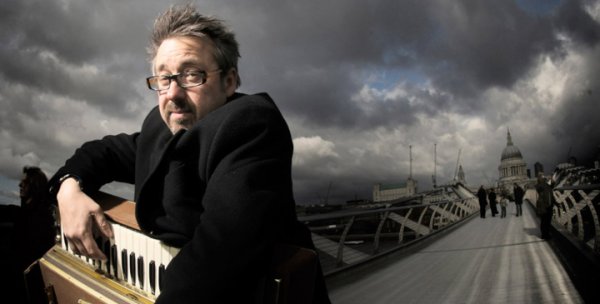 SETLIST
Ivy Dun
If You Want
The Poison Tree
Orlando
King Charles
The Black-blooded Clam
On The Dry Land
The Poplar Field
Hymn to the Virgin
To My Pianoforte
~ Encore:
The Flickering Shade

The North Sea Radio Orchestra opened with a largely guitar and cello instrumental medley. I could just see Craig Fortnam, he has an interesting, almost percussive method, plucking as many strings as he can simultaneously on his small bodied guitar (a lovely little instrument) rather than strumming. He directed the ensemble with subtle body language as the medley merged seamlessly into a fuller ensemble presence, complete with Sharon Fotnam’s frankly angelic voice. The woodwind and strings accompanying her seem to be arranged as substitutes for a miniature choir, such was the effect.

One of the notes I made was that North Sea Radio Orchestra can get into a groove, able to string together patterns of music in a slightly unorthodox way that can get you humming along, especially when you are familiar with their work. The overall feel is somewhat paradoxical because there’s touches of melancholy without even a hint of nihilism and each song left me smiling and, dare I say, elated. I also felt nostalgic. The combination of sounds is so refreshing after spending decades listening to bands built around guitar/bass/drums/keys. Perhaps I am predisposed to liking the sound of North Sea Radio Orchestra, being born into a household where my earliest memories were of Sundays filled with strings and horns, albeit from the Swing Era big bands and/or classical music recordings. To my ear, the violin and cello were pitch perfect.

The setting for the concert combined with the nature of the music resulted in a reverential crowd. They listened in earnest and even though the joy was not expressed outwardly during the performances, it was almost tangible. Every song was rewarded with enthusiastic applause.

Occasionally I was aware that the sound for the vocals through the P.A. was a little thin, though it was easy to quickly forget because of the impeccable performance by these remarkable musicians. Even when North Sea Radio Orchestra were simply tuning up it still sounded beautiful!

As the sun dipped behind the temples of the New God in the financial centre of the World, North Sea Radio Orchestra performed a couple of hymns and a carol in this partially re-purposed church. Elsewhere the same hymns would undoubtedly be performed in such a way that the intention of the composer is lost behind poorly executed organ and lacklustre singing. Not here. These hymns and carols were beautifully delivered.

For more information about the group take a look at Jez Rowden’s review of their September 2017 concert in Pentrych, South Wales. There’s little I can add that he has not already covered. 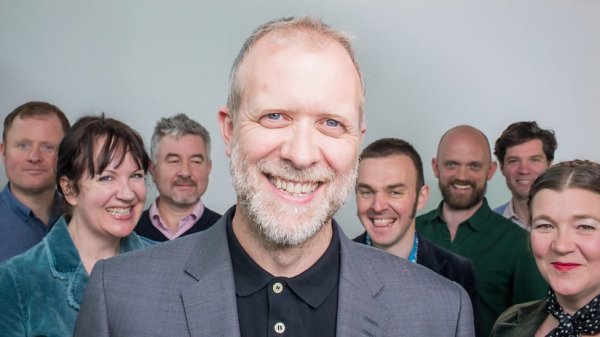