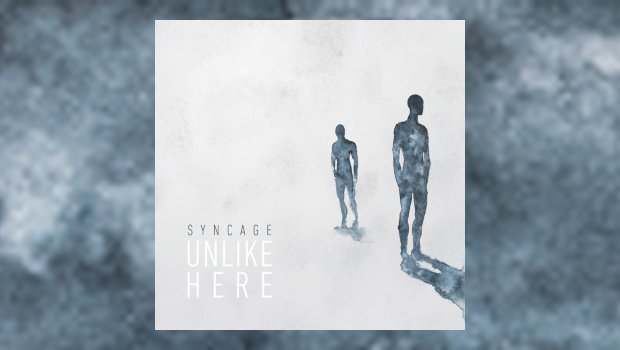 Syncage was formed almost a decade ago, by brothers Riccardo and Matteo Nicolin together with their best friends Daniele Tarabini and Matteo Graziani, when they were all teenagers. They have previously released a single, Hellhound in May 2014 which they followed up with the EP Italiota in September of the same year. Matteo Nicolin moved to the Netherlands and doubt was cast over what this meant for the band, but within months he began writing for what would become Unlike Here. Later other members chipped in to enhance the music with their own contributions, and once they had got down to recording the band signed to Bad Elephant Music for this, their first full album.

And what an album they have delivered here; there is a saying that youth is wasted on the young, not so here as Syncage have presented a piece of work that is mature and confident, all delivered with that youthful vitality. The music is an experimental fusion of jazz, metal, rock, ambience, with some touches of classic Italian prog. As they put it themselves, “Syncage are a musical project which aims to sting listeners’ resonance through various psycho emotional devices”.

This is certainly a varied and well constructed album, from the art rock opening track School you are immediately engaged as the band take you on a journey of discovery which delivers a sparkling array of songs. The performances are outstanding throughout with particular note to Matteo N’s amazing vocals, which can range between subtle and falsetto. Syncage make use of what they call the “Unlike Here” String Quartet to add extra texture and emotion to the music, always well placed and not overused.

After the opening song we get the track Uniform which is a sparse arrangement of violin and drums before the guitar and vocals join in, giving the song an almost folk-like feel. At times there appear to be influences from The Mars Volta and King Crimson in their delivery, indeed the KC influence is felt on Redirect and Edelwiess. The former has a harsh Crimson-like guitar riff, then a driving rhythm from bass and drums, with the violin playing over the top, before it gives way to Matteo’s high vocals, which seem manic at times with some Bruce Dickinson-like screams. Things begin to mellow slightly with the return of violin, the harsher riffs returns with the drive to the end.

Edelwiess is the epic track here, clocking in at fourteen and a half minutes. A spoken word intro leads to the line “guys are you there, is anyone?” which then leaves the violin to take over. The spoken word continues the story, accompanied by guitar before the focus changes and the music returns to Crimson-like menace. Driven along by the rhythm section, the violin comes back with a slightly crazed solo, leading to a great guitar solo with things lightening up with bright guitar and bass to the fore. The spoken word gives way to sung lyrics and the track contains a wonderful trumpet solo from Sean Lucariello which becomes somewhat unsettling towards the finish.

Elsewhere the songs continue the high standard; Still Unaware with its bright guitar and jazzy piano fairly bubbles along before its mid-song change of mood. The acoustic guitar, flute and violin feature on Stones Can’t Handle Gravity, which beautifully demonstrate the gentler side of the band. The album closes with the nine and a half minute title track, the strings and rhythm section leading at the start, eventually joined by atmospheric keyboards as the song continues to develop throughout, each added instrument giving extra textures. Matteo’s vocals are again top notch and used almost like another instrument, there’s a natural flow and progression from start to finish.

Unlike Here is an engaging album which holds the attention throughout. There is a cohesive whole to the songs which also have enough variety to stand up in their own right. Syncage have developed their own musical style, which will make them stand out in their future endeavours, and I for one look forward to where this band will take their music on subsequent releases. Give this a listen; I don’t think you will be disappointed.