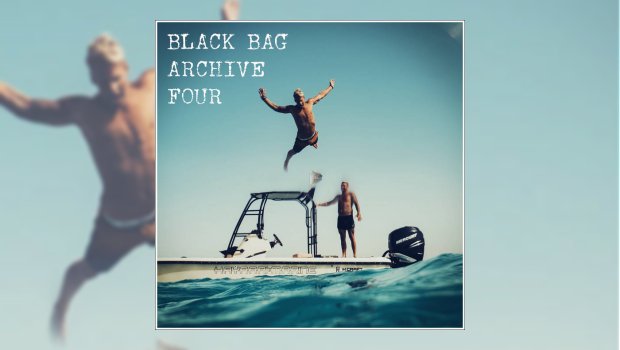 The story so far…

In November 2015 I reviewed Simon Godfrey’s Black Bag Archive, Volume I, a collection of salvaged tracks from unfinished projects.

Here we all were at the end of 2018 with Volume IV, and it got me wondering: Just how big are Mr Godfrey’s rather genre-defiant Black Bags? They seem huge and yet there is evidence that he can still ride a bicycle. Remember, this is music that didn’t make it onto albums by his old bands, including Tinyfish. Neither did it warrant, in Simon’s mind, inclusion into his other solo projects, Shineback or Valdez. Some of these songs might never have seen the light of day had Simon not had his Black Bag Epiphany! Would that I were that prolific and I could afford to put these many songs on the back burner!

One of the tracks is potentially significant for me. It may be the first track I ever heard by Simon. I’m sure I remember it from more than 5 years ago, but in any case, I’d just started listening to music once more after posting a few things on (the then new to me app) Soundcloud and this track popped up. Correction: it didn’t just pop up, it jumped out at me. That bass line is just… bloody marvellous. Over time, as I discovered Bad Elephant and became aware that they released music by artists such as Shineback, I started to suspect that this Si Godfrey bloke who’d posted a song by The Band Of Bastards and Simon Godfrey might be the same person. The clues were all there. No Mr. Bond, I Expect You To Die (Band Of Bastards), as posted by “Si Godfrey” sounds remarkably like Track Number 9 on Simon Godfrey’s Black Back Archive Volume IV. Come on, I’m no Sherlock Crumblesnatch but could Si be short for Simon…? We may never know the truth.

Anyway, No Mr. Bond, I Expect You To Die (Band Of Bastards) was in the running to be my standout track of this Black Bag release.

But then, I listened… really listened to Track Number 1, No Silver In The Mine. Simon has a rather interesting way of stringing chords together, chords that probably shouldn’t go. Whether this is simply because he likes the way it sounds, or it is by design I couldn’t tell you. The instrumentation, performance and structure seem almost too sophisticated for a song that the composer is sure doesn’t fit with anything else. I mean that as a compliment. A great opener.

Another track that catches my attention is A Million Paper Towels. Confession time: I am somewhat perplexed by spoken word performances as part of music. Like rapping… I don’t really get the point. Is it that these people think it is a superior method for conveying a message? Does it diminish the significance of the musical element to mere background, as if the rap is a painting and the music is wallpaper? The fact that Hip Hop is built on samples rather than original compositions and performances might support this hypothesis. Does it even matter? No. Of course not. You make music with whatever tools you have at your disposal and if people like it then you’ve made the world just that tiny bit better. Where was I? Oh yeah… I think spoken word is quite a hard thing to pull off, especially in some genres. It is possible that Simon and Robert Ramsay unplug their noses in the general direction of petty attempts to assign their music to genre. In this track I find Rob Ramsay’s spoken word performance curiously inspiring! And although Simon somewhat apologetically points out that RR drops the F-Bomb, no apology is necessary because it perfectly accentuates the message:

“Fuck all those little things;
The ones we use to deceive ourselves!
Let’s kick the arse of some of those big things.”

I love that! It puts me in mind of another inspired lyric because…

“Life is very short, and there’s no time for fussing and fighting, my friend.”

Oh yes, I did just make that comparison. You can’t stop me doing that. You’re not the boss of me. You’re not even paying to read this review.

Simon Godfrey is quite prolific on the Interwebs, including his Facebook VLOGS with his dog, Dora, documenting their adventures in the Philadelphia park in which they meet some very odd people. Simon also uses that same well-known Social Medium to document the stories behind the songs that make their way onto the Black Bag albums. This gives a fascinating insight into Simon as a musician and his methodologies. I recommend that you try and follow him, but the point here is that this information arms the listener with information in arguably a more personal and contemporary fashion than sleeve notes could.

But it does almost risk redundancy for those reviewing this. On the other hand, all my speculative wittering is revealed for what it is and reduced to just one thing: Do I think it is good music and worth shelling out your hard-earned cash?

Well, it is the only music I’ve had on in the car since I got my promo copy.

So, should you buy it? Here are the facts:

1 – I pre-ordered the CD from those Bad Elephants.
2 – I sing along to Crystal, Where Have You Been? in the car (though I skip the spontaneous random bit at the end – imagining Simon’s amused ‘hello’ as his guitar is pushed off his lap by the curious, slobbering beagle is getting old).
3 – Nimbus is a veritable earworm infestation.
4 – There are the tracks I already mentioned.
5 – The album resolves nicely with the final track, Gideon Falls.

Dunno. What do you think?