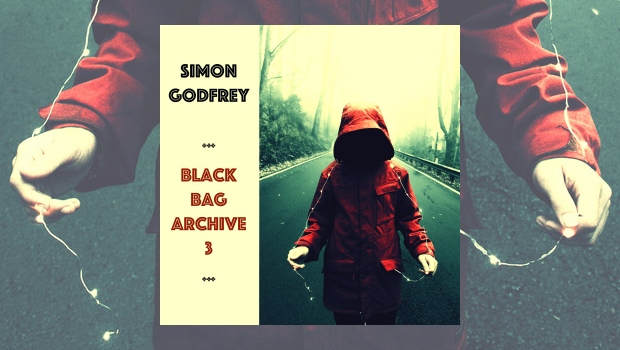 The tracks on Black Bag Archive, Volume III are still comprised partly from the unwanted love-children left on the orphanage steps, the result of Simon’s earlier musical flirtations and dalliances, though I think I read somewhere that these are more easily pinned down to the songs that he wrote in his Lambeth Walk days. Although I suspect that Simon Godfrey is quite capable of producing some devastatingly awe-inspiring sub-cockney dance routines in a musical theatre context (“Caww blimeyy, maytah!”), ‘Lambeth Walk’ refers to his time living in and about the real-life place in London’s SE11 (nowhere near the Bells Of Bow), where he lived in the late 20th Century.

Ignoring the lack of a consistency in the logos and artwork between the three releases, this series feels like the musical equivalent of a magazine, Black Bag, of which Simon is Editor-In-Chief. That analogy may not stand up to too much scrutiny, but it does fill in a lot of the questions that we might ask ourselves about artists. Conceptually, The Black Bag Archive may be considered a retrospective. With our favourite and longer-lived artists there is always some degree of mystery that surrounds their process and progress. Later in their career some artists – arguably becoming less artistically prolific – succumb to temptation and cash in on our curiosity, releasing everything and everything, whatever the quality, as part of some boxed set or special re-issue. But Simon is still involved in many highly creative projects, including his “supergroup”, Valdez, his alter-ego, Shineback, and with his solo work. The quality of these releases is not in doubt. With controlled, high quality periodic releases of older material derived from proto-songs, this is a far more honest and organised way of answering these questions without compromising any of his hard-earned artistic credibility.

Now that we’ve got three to look back on there is a thread revealing itself that binds together all the Black Bag volumes to date. I can now easily identify Simon’s distinctive voice and his choice of chord progressions weave through all three releases. Not that this is a case of constantly repeating the same songs, more an insight into what music he is compelled to record because it accompanies him in his head. The usual genre and sub-genre labels are redundant, and I like this about Simon Godfrey; I suspect that he now knows how to just do music and let other people decide on the labelling. I consider him rather genre-defiant.

I had already used up all the words when I reviewed BB-V2. Those words were: “Epic, soft, hard, quasi-industrial, pretty, heavy, complicated, simple, beautiful, deceptive and transparent.” But do they apply to this mini-album? Well, some do, some don’t. I have added a few more: “Rocking”, “Rolling”, “Boogie” and “Woogie”! Take The Maltese Hotel. OK, it quickly drops the swing of the introductory piano boogie-woogie and it does flip back and forth rhythmically but it is rockin’ and rollin’. If it wasn’t for the show shying away from showcasing new music from the fringes and only attempting to appeal to fans of the latest and established mainstream acts, then I could imagine Mr. G. appearing on Later, with Jools Holland doing his signature we’re-jamming-whether-you-like-it-or-not piano accompaniment. I suspect this one could happily have been brought to the Valdez rehearsal rooms.

Even though this is third volume in the series I was left with the impression that some of these songs were from an earlier stage in Simon’s songwriting development. I may not have quite hit the mark as I’m guessing at the chronology of the songwriting, but track 1 of Volume III, One Mile Straight Down, for example, has a simple format and definite hook, but dare I say, it lacks the subtlety and sophistication of some of the other songs to be found in this series, like Papaya Whip from Volume I, or The Year from Volume II.

Nevertheless, there are songs that ooze inventiveness and sophistication, like Radio Zero, which in places is cinematic, progressive and positively Vangelisesque and sits neatly with the more ambient tracks from the previous two volumes.

There’s little evidence that Simon, in fact, needs to work with anyone else, but we do see a smattering of guest on this one: Jem Godfrey is on keyboards for some and, as with so many of Simon’s projects, there’s word-mongering by Robert Ramsay. Jem Godfrey is an accomplished producer, brother, keyboardist and songwriter. You don’t know of him? Call yourself a Progger? You should probably look him up on Google if you don’t know who he is. Then there’s Robert Ramsay. His surreal and intriguing solo album, Confound And Disturb is so very worthy of investigation. Assembling words is his skill though I’m often-as-not put on my back foot by Mr. Ramsay’s style of delivery. In More Power Than Bombs he sets up the theme of the song perfectly for the almost bombastic, powerful, harmonized Godfrey singery-bandery bit.

The contrast between songs on this album should make for welcome variety if your usual diet is prog-by-numbers. Simon jumps about without regard for genre, with hooks and sweeps and pops and feel-good-bits and loudness and softness. I would like to see the songs from all three volumes listed against the years that they were written so that I could analyse Simon’s journey – but then again, perhaps not. Perhaps we need artists to hold back at least some small amount of mystery about the way they work. My excellent reviews aside, the easiest way to communicate what his music is like is by pointing people at Bandcamp. So ~ go to Bandcamp. Alas, once again; there is no physical copy available. High bitrate digital MP3 and FLAC whatsits.

Anyway: Simon has set a high bar with his first two volumes of “throw-away” music, and I must say that Volume III is not quite “up there”. Notwithstanding, it is still smashing, and I think that if he carries on with this series then Volume IV will be well worth the wait. Do buy Black Bag Archive, Volume III and empower Simon for more of this type of thing.