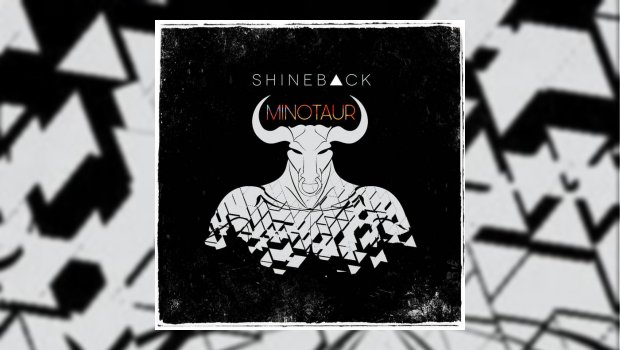 It is worth revisiting the history of Shineback when considering this extended player.

Shineback is a Simon Godfrey (ex-TinyFish) project, the first album under the name – Rise Up Forgotten, Return Destroyed – launching the now rather successful independent label Bad Elephant Music back in 2013.

Shineback established that the recipe would utilise a number of approaches in the making of their music pie. Blending electronic and not-electronic music (which is a genre – look it up) would be a thing. No other thing seemed taboo and using musicians from a variety of bands and having words written by Simon’s long-term collaborator Robert Ramsay (also ex-TinyFish) was also in the RUFRD tart.

Rise Up Forgotten, Return Destroyed demonstrated that Shineback were certainly not an exponent of the less-is-more philosophy. They were very in-your-face, a little bit wall-of-sound and a somewhat mental, reflecting the subject matter.

Minotaur, although a definite return to whatever it is makes Shineback, er, Shineback, is a more restrained and cohesive release that reveals more of what I thought I sensed in Mr Godfrey’s Black Bag releases.

As far as possible in a little over twenty minutes, Shineback is still stylistically mixing it up. I got hints of many others styles though nothing overtly derivative. OK, from two and a half minutes into Safe As Houses, Simon manages to sound like Simon LeBon but if you don’t like Duran Duran then forget I said that and read this bit instead:

From two and a half minutes into Safe As Houses, Simon manages to sound completely unlike Simon LeBon in every way.

The four tracks on this EP feel very much evolved from the original Shineback songs and from experiments with soundscapes, synthesizers and sequencers. Mr Ramsay’s voice, as stern as the strictest teacher, and just slightly more disturbing, delivers his words in a manner starkly contrasting with the multi-layered harmonies of Mr Godfrey’s charmonies (charmonies is a word – it means charming harmony – look it up). Safe as Houses is the most Shinebacky song here.

In the title track there are some lovely chord sequences with unexpected twists that are just different enough to throw you off-guard without losing musicality. Guitars are not obvious, blending with Fender-Rhodes-like piano here and little sequences there to add subtle texture to the tunes. The end product seems more important than the way it was played. As it should be. There are also some proper standing-in-a-crowd-fist-pumpy bits that are more Paul Oakenfold than “prog”.

Would I buy it?

Yes. I did. Not only is it a good way to spend twenty-odd minutes but if you get in there before the end of September 2017 the uncharacteristically-not-that-Bad Elephants will donate all revenue generated by this release to the Multiple Sclerosis Society.