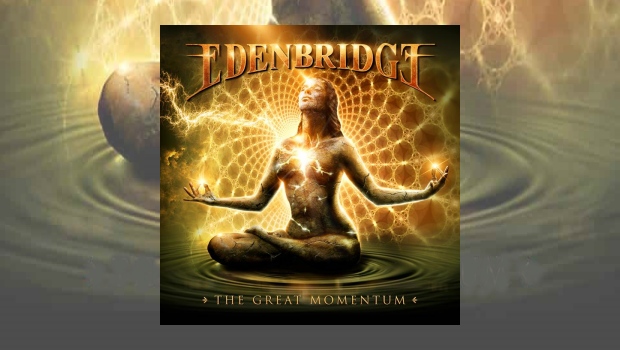 After 2013’s The Bonding it was hard to imagine how Edenbridge could further improve on their sound and majestic power as a band. That album is definitely one of my favorites of this decade, if not of all-time. From the profound lyrics to the symphonic sound, it was a game changer in every way and a big step in the right direction with orchestra and choir support really making the album spectacular.

With The Great Momentum Edenbridge have made another great album. The stories may not have the same magnitude as The Bonding and it might not be as powerful, particularly the closer, but that is not to discredit The Great Momentum in any way as the lyrics, music, symphonic qualities and choirs remain in place, however, those waiting for the next stage of the band’s development must wait longer…

The album’s first single, opener Shiantara sends a signal that the template established on The Bonding will continue as the spirit of that album comes through in lyrics with a majestic quality that sits well with the music. The symphonic orchestration highlights and extends the great musicianship while the accompanying video uses images from the album to fine effect.

Sabine Edelsbacher’s vocals are as magnificent as ever and one of her most powerful performances on the album:-

“I stand here…eye to eye…face to face,
I take this place…in the right of Shiantara.”
…
“This path continues emotional, intense the way to gain a renewed sense.
This bag of memories I have prized as vintage wine.
It seems to strike a chord in me enshrined.”

The Die is Not Cast begins with excellent acoustic guitars and symphonic synths set against muscular bass and drums. Electric guitars take over and build up steam in another lyrical track driven by some compelling music. No, the die is not yet cast and I hope that songs like this are part of the band’s future; symphonic music and strong vocals, mixed with quiet periods of acoustic guitar or piano. Perfect, one of the album’s best tracks. The lyrics could have many meanings, from saving the environment to slowing the nationalist fervour disseminating throughout Europe and the world:-

“Take the new day.
Move doubt away.
Chances are vast.
The die is not cast.”
…
“It comes to character trait.
Believe me, it’s all in your hands,
Your nature’s dictating your fate.”

Positive words, almost directives to live a more purposeful life and something we need to hear, especially amid some of the darkest days we have experienced globally in years.

The Moment is Now opens with more symphonic thunder than can be imagined, then grinding guitars and rhythms take over in a Rocky–like fight song to get you moving. This should be the next stage of development for this band.

Until the End of Time is a carry-over from Sabine and guitarist Lanvall’s acoustic Voiciano sessions and album. A love duet, the song opens with Erik Martensson singing with Sabine in another classic Edenbridge track that warms the heart. Electric chords build with the rhythms on The Visitor, until that wonderful orchestration is added, then Sabine:-

“Take the early hour.
Leave your ivory tower.
Live your life for your own sake.
A drop in the ocean.
Restlessly in motion.
Reality is what you make.”

It’s a good song, but similar to many of their others over the years. They saved that last verse, the most powerful lyrics, for the end, all sung with the choral support of Thomas Strübler and Alex Koller, with the Junge Philharmonie Freistadt orchestra.

Return to Grace has the magic of The Bonding as similar rhythms and melodies build momentum and drama through orchestration mixed with heavy lead guitar, Eastern instrumentation lifting this symphony to a whole new level.

“Did you give power to someone forcing pride?
And are you hiding shadows in yourself, so deep inside?
Is someone trampling, demoralizing you?
When you are feeling helpless, at the mercy, out of blue, the disregard in you.
Glory’s a story.
Life is too short to give void space.
A tree to the sky.
So join in to tie.
It is a return to grace.”

Sabine’s vocals with piano accompaniment make Only a Whiff of Life another of the best tracks here:

“Life goes by.
Who defines the moment?
Where we go, whom we choose?
How many souls fade before they came in?
Is life tragic to lose?”

It reminds me of the Everflow album from the Voiciano project. Like a movie soundtrack, the excellent guitar and piano offer a break from the heavy, the orchestra joining in to provide the surrounding symphony.

Another great song is A Turnaround in Art, the grinding guitars and rhythms returning, but the thundering orchestra then lifts the sound beyond the usual and the floor is given to Sabine to tell the story:-

“What’s moving you inside
Will take you on a ride.
Inspiration and imagination,
Golden way. Leave all doors wide open.
The art can be aside.”

The closing track of The Bonding was what made all the difference in the world for this band – my favorite song of that year with some of the best lyrics I had heard in a long time and music that took my breath away. The final track on The Great Momentum, The Greatest Gift of All, is a fine song about a distant land, but the lyrics, though bold, do not match the power of The Bonding, despite the choral and orchestral support. The song’s themes are very similar to My Earth Dream, the band’s 2008 album, but they have done it before and I was hoping for something that would be like Shangri-La…a glimpse of something spectacular and unknown; a surprise.

The Great Momentum is another wonderful album from Edenbridge. It may be more balanced than The Bonding in that all the songs have powerful elements, the strength of the album not locked up in the closer with most of the songs featuring orchestral support, choirs and, of course, Sabine’s wonderful voice. This is a great follow-up and another fantastic recording.