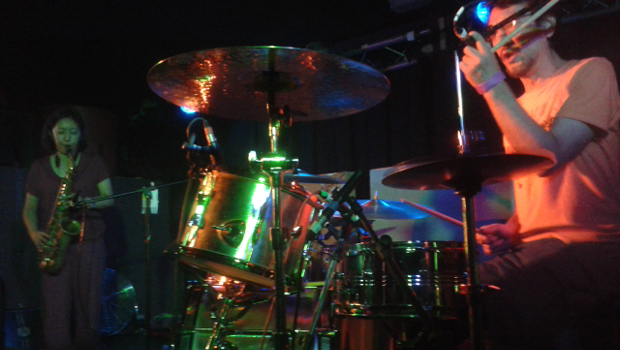 It’s a gig night so off I go for a symphonic evening of songs about Hobbits and unicorns.

Huge generalisations aside, playing the genre game can be a one-way ticket to a closed mind. Now I love Prog as much as the next Yes fan but it does you good and keeps the mind nimble if you venture out of your comfort zone, even if it’s only now and again, and in recent years I have found myself craving stranger and more unusual sounds more frequently, and live is where it can really come together. But living in a sleepy musical backwater as I do, it is a necessity to travel to The Big CityTM to find gigs that really scratch this itch, and the travelling is getting less appealing and harder to do as the calendar reaches parts of the “new” millennium once deemed unfeasible and my knees squeal more loudly for mercy.

As we all know, Prog is a broad church, the pews of which can accommodate just about any form of music making you can think of, as is the case tonight; three forward looking performances that dare to be different and do their own thing purely for the love of it. Is it Prog? ‘Yes’, in the truest sense, ‘No’ if you’re thinking of the ‘P’ word as a specific style – but who cares anyway? These guys (and gal) don’t just rip up the genre pattern book, they then blowtorch it and feed it to the cat. There are plenty of bands – and good luck to them – that seemingly strive to fit within a comfortable envelope of familiarity that their fan base shows a clear liking for, music that sounds cosily like something they’ve heard before. Now I like baked beans, for example, but need a diet that takes in a rich variety of other flavours and textures too. My brain dies a little just thinking about it being otherwise; I enjoy a nice tune, a well strummed guitar and epic keyboard washes but after a couple of sessions of that alone I’m soon craving something ‘Other’. YouTube and Bandcamp are all well and good but the in-yer-face viscerality of a truly creative live performance is where the magic happens, the conjuring up of things you’d never have even suspected could exist, right before your eyes (and, these days, protected lug holes). There’s no need for set list expectations or crowd pleasing, just turn up and see what happens. Prog is an overused term these days, having been reclaimed and re-branded as acceptable by the media and (to a small extent) mainstream, but it can cover up a multitude of backward-looking sins under its thrusting and forward-thinking definition. Is it a brand or a state of mind? You, Dear Reader, must decide what works best for you.

So, diatribe over, what’s on the menu tonight? Well, two acts (three really) that I’ve never heard of and a complete and total legend in an unfamiliar setting.

Local boys Big Naturals & Anthroprophh kick things off. They’re already on when I get into the re-vamped Exchange, the ceiling fans doing a fine job cooling the sweatbox down to provide a particularly pleasant environment. The band is set up on the floor in front of the stage, taking up a good chunk of the room, so it is impossible to see what is actually going on from my spot near the back – but you can hear them well enough. “A devastating unholy union of industrial strength punk fury and psychedelic alien soundtracks” shouts the blurb, and it isn’t wrong. There’s an almost trance-like vibe set up by the drums over which bass (often two of them, including an upright) and Space Rock swooshiness glide. It’s a compelling sound, occasionally punctuated by intense vocals, and never short of interesting. 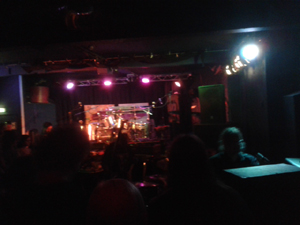 Big Naturals are noise rock duo Jesse Webb on drums and bassist/electronics dude Gareth Turner. They kick up a controlled storm, well thought out and with purpose, Webb succeeding in setting up a repetitive framework of bombardment into which the other players fit; this is not an evening for just hitting things to create a deafeningly dense wall of sound and hoping that it goes somewhere interesting. There is planning, integrity and direction – and the substantial crowd know it to be good. There’s even dancing. Kinda. In the current formation, Big Naturals are spliced together with Anthroprophh (Paul Allen) whose work is shot through with psychedelic lines and Kraut Rock intent that would push the often trippy sounds into space, if Webb and Turner didn’t nail it all down so firmly. I’ve no idea what they did but it sounded mightily impressive.

A short break as the floor is cleared to make for a much more agreeable viewing space, and Barberos (a trio from Liverpool) take the stage. There’s something different going on here. Can’t quite put my finger on it…Oh Yes! They’re wearing skin-tight full-body spandex and gimp masks. That’d be it. They must be more grateful for the sterling work being done by the ceiling fans than anyone! Not only this but the two drum kits are positioned centre stage facing each other, bass drum to bass drum, inches apart. Behind this two headed metallic beast of terror stands Keyboard Gimp and his sequencer. The Drum Gimps take their places and as they start to play the result is a mesmerizing mixture of pulverising rhythms and pure theatre. They might be branded as “electro-noise” but that does them a disservice as they channel all manner of influences and styles, including Ruins, Aphex Twin and, at times, the interlocking rhythms of King Crimson. Sometimes the drums mirror each other, at times they complement the other’s playing, often with eyes gleaming through their otherwise faceless masks, surveying the crowd with a studied interest and occasionally letting rip with howling vocals muffled by the full-face material. A fantastic example of synchronised drumming set to a skittering synth backdrop, it’s an enthralling set that even sees them utilise the venerable cowbell to good effect. Completely wonderful, this is how to do things differently without losing the audience, who are once again particularly enthusiastic and supportive.

And here’s the rub. Most of the audience tonight appear to be in their 20s and with a fairly equal male/female split. Doesn’t sound like a Prog gig, does it? There are a couple of gnarled old has-beens like myself but this is a cutting edge event for young risk takers. THIS is what constitutes Prog for today’s younger listeners who wish their music to surprise them and take them to otherworldly places. They would be more likely to be pushing watermelons into their bottoms than attend a Yes, or similar, gig (although KC might be an exception…) and this appears to be why actual Prog gigs are the preserve of the near-retirable – they are now often amongst the most conservative (small ‘c’ of course!) musical events around with things outside of the expected frowned upon. Not surprising given the way in which Prog brands itself but a shame as the kids are often missing out, as is the case for the fogeys not in attendance tonight. The message is clear: Evolve or Die, genre classification and limitation do more harm than good.

And now, back to the evolution… 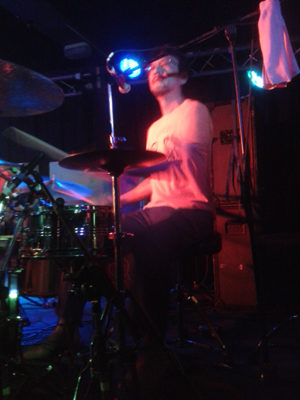 ‘Legendary’ is a big word. However large the font it is always pronounced ‘LEGENDARY’, and is not a word to be trifled with. It is the perfect word to describe Tatsuya Yoshida, Japanese master drummer of the Jazz-Punk-Prog-Noise-Avant variety, one of the most innovative musicians, composers and improvisers around today. His name has been on about 8,000,000 albums but on stage is where the real creativity lies: seat-of-the-pants playing as if his life depended on it. Ruins, the bass and drums duo in which Yoshida initially made his name and remains the only permanent fixture, has evolved over the years to incorporate the Ruins Alone solo project, but here he is joined by alto saxophonist Ono Ryoko to become, unsurprisingly, Sax Ruins, a formation that has been active since 2006. Ono is a skilled improviser in her own right and has worked with many different bands, including her own Ryorchestra, and her sax, augmented by pedal activated electronics, adds another layer of complexity to the Ruins way of doing things. And the results are phenomenal. The set tonight appeared quite short but that was most likely down to the duo distorting time itself, such is the depth and skill of the playing. There is discipline amidst the madness and cathartic howling, an engrossing thing of beauty within the prickliness.

Before the set and in a three-quarters empty hall, most punters having stepped out for fresh air and a contradictory fag, it was fascinating to watch Yoshida assemble his work station for the evening from the two kits left behind by Barberos. Meticulous was his preparation as he quietly selected equipment, rejecting some parts, put things together, tested them and moved bits around until he was happy with the result which saw him positioned sideways on, stage left. Once ready and with little fanfare other than a muted “Good evening, we are Sax Ruins, from Japan” they’re off in a clattering, rampaging beast of a set, each cosmic avant blast ending on an abrupt “Thank you!”. I’d managed to get within touching distance of the great man, in behind the speaker so the sound wasn’t overly intense but I was still glad I’d brought my plugs to take the edge off and save my fast crumbling ears just a little. From this position I could watch Yoshida in full flow, and it’s a majestic sight; a spectacled and scholarly presence going crazy ape-shit bonkers, singing at times in his own inimitable style, about what I neither know nor particularly care – it’s just a perfect fit. The dexterity of his hands is matched by his feet, which as a rare treat I could clearly see too. The fact that he’s wearing flip-flops strikes me as pleasingly unusual but he plays hi-hat barefoot, left flip (or is it flop?) placed under his stool. The right foot remains clad, although he slips that one off whenever he deems that the kick drum requires a more zealous seeing to. 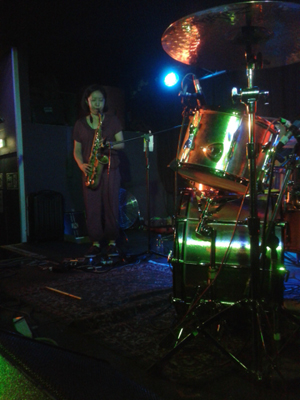 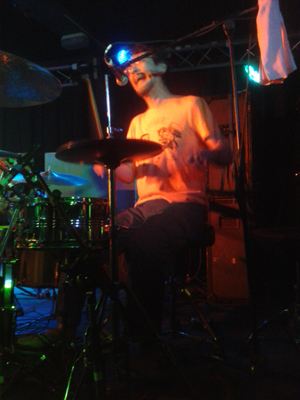 The unrestrained yet highly disciplined approach employed in creating music of such complexity was clear to all and after a well deserved encore of two further brief pieces Yoshida leaps quickly into his other role of Merch Guy and dutifully mans the desk to talk shop with his happy customers.

All in all a grand evening out for a small number of bucks. These guys are never going to become millionaires from playing this stuff but you know that isn’t why they’re here. Many hands can fit into the 8-fingered Glove of Prog, long may that continue, but it now feels that ‘Mainstream Prog’ is dragging down some of the peripheral disciplines that do so much more to keep the flag of progression flying. As much as I love many of the more traditional Prog bands, young and old, for a visceral and face-meltingly creative experience I’d take this over just about any of them.

See you on the outer reaches…