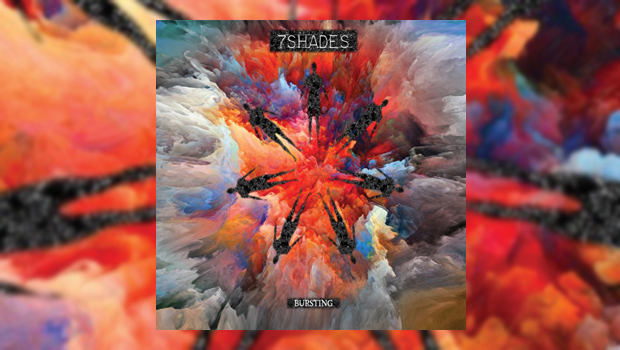 About nine months or so ago, after decades of sporadically trying, I suddenly “got” Cardiacs. The penny did not so much drop as knock me down like a soppy Great Dane, and then proceeded to give me a good licking. “Why did it take you so long, you silly sod?” it said as it battered me with a burst cushion and whipped me with a daisy. Since that Eureka Moment I have delved long and deep into all manner of offshoots of Tim Smith’s merry bunch of circus pranksters, and having joined Cardiacs Farcebook page, spotted a link t’other day to the Bandcamp site of this very troupe whom I am about to scribble about.

Hereford based 7Shades are unashamed Cardiacs fanatics, and wear those influences on their sleeves with pride. In fact the band was formed by drummer, writer, producer, and all-round ringmaster Neil Spragg purely to record a tribute to the iconic band and to raise some money for Tim Smith, via a crowdfunding campaign, recording the typically self-deprecatingly titled 2014 album Seven shades (of shit) as Neil explains:

“This album came about through a desire to do a fund-raiser for Tim, a plan which came to fruition via a Pledge Music campaign which has raised over £1,000 for him…The music was all written, by myself, as a very direct tribute to Tim’s music and the music of Cardiacs – my hope being that fans of his unique style might be reminded in parts by the sound and style of my efforts. In the absence of any new Cardiacs material, I wanted to try and fill that gap in the best way I can. Realising that there was no way I could ever really do that, I’m hoping that there will be small glimmers of that influence in this album, and that it might raise a smile with Cardiacs fans when they hear them. Of course, the album is inevitably shot through with influences from a myriad of other sources, and I hope that these all bring something interesting to the table too :-)”

A noble cause indeed, and one that continues to give rise to some joyous musical capers that take the maestro’s influences and produce something quite captivating with the second album Bursting. Mixing lyrics railing against conformity with music of a similar bent, the album takes typically English psychedelic influences stirred with copious amounts of Cardiacs-styled mischievousness to produce a fun album of way out wonkiness.

After the furious pronk intro of Milky Train we arrive at the insanely catchy Marking Time which has one heck of an earworm lurking in its chorus. I pity you if you can’t stand it, as it will not leave you alone, for it is a weevil burrowing into your auricular canal.

Running the gamut of what first impresses as edge-of-seat inspired lunacy, Bursting has obviously had a lot of thought put into the intricacies of arrangement and the band are as tight as a nut as they contort themselves through Neil’s weird musical thought processes.

The oddest thing here is the eight minute seemingly Krautrock inspired instrumental Spring’s Sordid Show, which ramps up the intensity from quiet initial stirrings to end up sounding like Devo playing Kraftwerk for kicks. The following Cock Block And Barrel Roll continues to take Bursting into its own psychedelic territory, and is a very odd song indeed, and something you could imagine would put a grin on Daevid Allen’s face, wherever the Pixie may be, looking down on us mere mortals.

Lyrically often dark, the words on this record are less stream of consciousness than some of Tim Smith’s, but the verses of Nudey Prod Games (I wrote “Prog” first…a Freudian slip, methinks!) are a twisted nursery rhyme of dubious intent that Tim would no doubt approve of.

The fairground waltz of Renard goes round and round to end where it starts…“then…you make it easy”. Musical inventiveness oozes out of every zero and one on this kaleidoscopic album, and the band fully absorb the Cardiacs muse, rather than attempting to catch it by chasing it around the garden, which incidentally would have been enjoyable of itself, and their confidence and talent results in an identifiable sound of their own.

Difficult time signatures combined with a bucketload of off kilter pop-punk pizzazz and the occasional burst of fiery guitars make this an easy one for Pondies to dig, but anyone with a different ear to the norm can only come away from this record with a stoopid grin on their fizzog, while their brains simmer in a gooey puddle on the floor.

[You can still contribute to Tim Smith’s ongoing healthcare by buying Seven shades (of shit) over on the Bandcamp page, and there will be a companion album to the new one entitled Bursting Remixed featuring several Cardiacs’ associated loons messing about with the mixing desk, proceeds all going to Tim.] 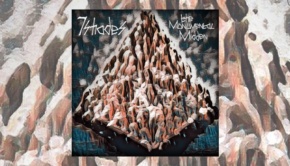