With many thanks to Carey Brandon for the use of the photos.

Steve Hackett returned to Cardiff on his latest tour, Acolyte to Wolflight with Genesis Revisited – The Total Experience, which as the name suggests draws songs from his entire solo career spiced up with a Genesis selection. The band remains the same as his previous Genesis Revisited tours with the exception of the bass player, who has changed for each of the three shows I have seen, although that is not a bad thing as first we had Lee Pomeroy, then Nick Beggs and on this occasion Roine Stolt of the Flower Kings. I found this an intriguing choice as Roine is best known for his great lead guitar playing. Would this work? The answer is most definitely ‘Yes’ and Roine, like his predecessors, has brought something unique to Steve’s show.

It does appear when watching Steve that he gets a lot of pleasure from performing classic songs from his tenure in Genesis, this being evident by his cheerful smiles and humble acceptance of the audience response to the Genesis Revisited shows. In my opinion he has become the keeper and protector of the Genesis legacy. Indeed I feel that these shows clearly demonstrate how much of a key role he played in the classic sound of that band. 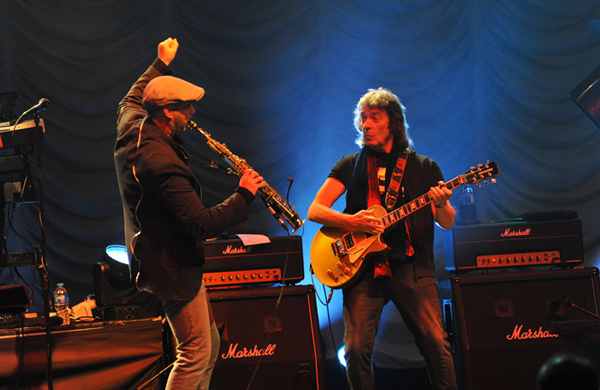 The show is divided into two, the first half including selections from Steve’s solo work and the second half focusing on Genesis material. Bang on half past 7, a prompt start meant that I arrived in the hall just after the first song had started to take my seat in the fifth row with an excellent view, although that is the case from most areas of this marvellous venue. After Spectral Mornings, which was played as a quartet, Steve introduced Roine who joined the band on stage for the remainder of the show.

We were treated to a beautifully played set of solo material which was both emotional and powerful at times. The sound was excellent, not too loud so as to sacrifice the subtleties of the music, the only issue being that the bass was a little low in the mix for a couple of numbers but once sorted the sound was well balanced and clear. Six tracks were played from Steve’s recent Wolflight album, and these sat well with other favourites from Steve’s back catalogue. Each song had the audience captivated and brought forth loud applause and occasional standing ovations. Nad Sylvan joined the band to add his vocal talents to Icarus Ascending, most of the other songs in the first half being sung by Steve himself. Star of Sirius and set closer Shadow of the Hierophant were of a sublime quality, played with precision and skill.

After what seemed like a short time we arrived at the interval, Steve announcing that following a fifteen minute break the band would return for a second half consisting of Genesis songs. The opener was the first of two songs taken from Foxtrot, and what a surprise it was – Get ‘Em Out By Friday, Nad Sylvan providing excellent vocals, as always. This was followed by another unexpected gem, Can-Utility and the Coastliners, and it was now clear that we were going to get material not played on the previous Genesis Revisited tours. After the Ordeal followed with Steve sat front of stage to play the intro on acoustic guitar, showing a delicate and sensitive touch before Roine treated us to his lead guitar skills, joined around three minutes in by Steve, their electric guitars interlocking well as each took turn to lead the song. Magical stuff. 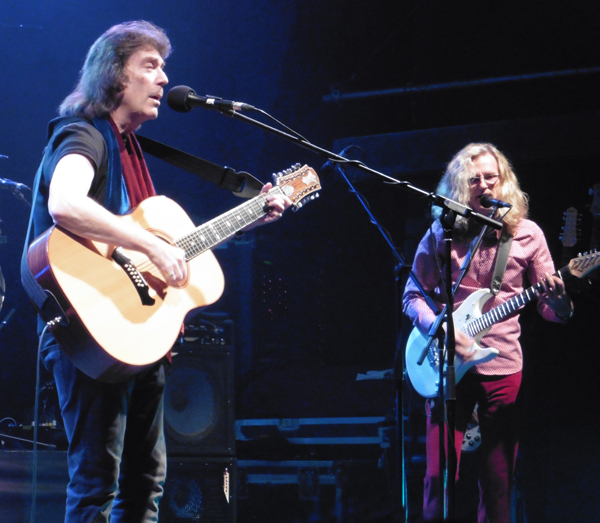 As if this was not enough Steve announced the next song, stating that it is an often requested one, Cinema Show which was again played brilliantly with every member of the band shining. The evening soon came to a close with a marvellous rendition of The Musical Box, one of my personal favourites, the band returning for the encore to give us Clocks – The Angel of Mons and a magnificent Firth of Fifth with Steve’s guitar soaring beautifully to show what a true guitar master he is.

A wonderful evening which, if you enjoy Steve’s music and the songs of Genesis, comes highly recommended. Steve’s band never fail to please, the professional skill and enjoyment they get from playing these songs is always evident. I would not hesitate to go again for Steve’s next tour as I found this a most enjoyable experience, a great evening had by all I think.