Three years since he last toured in the U.K., Roger Hodgson returns to one of London’s most iconic theatres in a show prompted by the overwhelming demand from fans unable to get tickets for his sell-out concert at the Royal Albert Hall the following night. Indeed, it is testament both to his enduring appeal as well as the genuine affection in which he is held that throughout the evening it is gradually revealed that fans have travelled not just from across the United Kingdom but also from Central and Eastern Europe, the Middle East, North America, Scandinavia and even South America (Chile) in order to be here tonight. 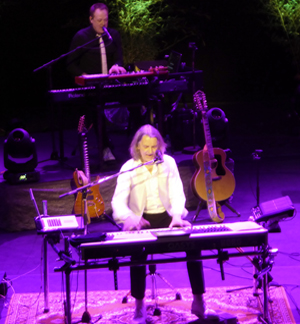 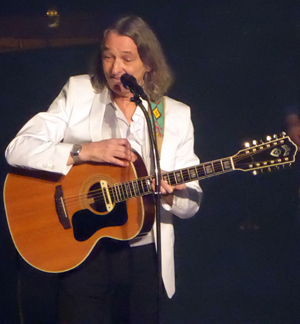 That sense of affection is immediately tangible as Hodgson takes to the stage. The applause is warmly enthusiastic and he is genuinely appreciative of – and indeed appears to be quite moved by – the strength of the reception he is receiving. He takes time to enjoy the moment, acknowledge the audience, calm his nerves and settle at his keyboard. He adjusts his sleeves, checks the screen of this laptop, and, muttering “Ok, let’s do this”, strikes the lower register with his left hand and gradually builds the tension until the harmonica cuts the air with the unmistakable opening riff that signals Take The Long Way Home.

If Hodgson is moved by the tide of affection flowing from the audience then he reciprocates in equal measure with a charming sincerity and gracious affability which quickly elevates the evening into something remarkably different and uniquely personal. Being ‘home’ again is something clearly important to him and the bond between singer and audience evolves as the evening progresses to form a relationship which is as important and significant as the music itself. 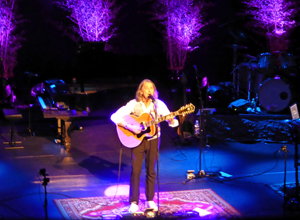 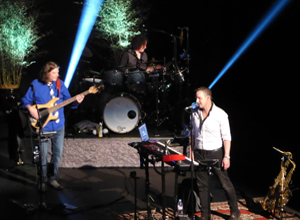 The music and the man are inseparable and the show is given greater poignancy and depth by the snippets of autobiography Hodgson carefully weaves and narrates between each song. As a prelude to Hide in Your Shell, he tells us music was a refuge as he was growing up, a shelter in harsh circumstances and difficult times. Moving to the grand piano, he reflects that music was also a calming oasis for him when life became overwhelming and unbearable before playing Lord Is It Mine. The set is, in many respects, a mirror which lays bare facets of his turbulent past and shines an illuminating light on the origin of some of his songs. The way in which he chooses to share these moments is beautifully, refreshingly honest, and that he feels both willing and able to do it in front of 2,000 people speaks volumes to the quality of the rapport and the emotional depth of the relationship which has been created in the theatre.

Amidst the friendly congeniality there is also a clear sense of control and discipline. His movement around the stage is measured and unhurried, sitting one minute at the keyboard stage left, then sauntering over to the grand piano centre stage, then stepping back to an array of acoustic guitars. At the beginning of the second set, his keyboard fails him and we are introduced with good humour to his sound engineer. But it is telling that even when sound is restored, the evening does not proceed until he is completely satisfied that the level and the mix is absolutely perfect again. It all happens quite calmly, in a measured and unhurried manner reflecting a consummate professionalism which contributes to his sense of ease and comfort on the stage. 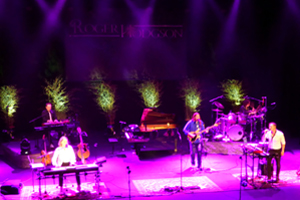 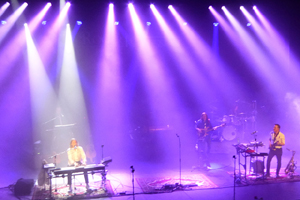 The calm and calming presence he exudes extends to the band he has assembled around him. They are, quite simply, excellent. Kevin Adamson on keyboards, synthesizers and backing vocals is the perfect foil for Hodgson’s playing style, bringing lively flourishes and energetic adornments to each song. David Carpenter on bass is the very picture of relaxed focus, a man completely absorbed in the agile bass lines and driving rhythms whilst Bryan Head on drums brings both an assured sense of timing as well as a flair for the dramatic when required. The exception to this picture is the fabulous Aaron MacDonald, a masterfully controlled frenzy of energy and enthusiasm on saxophones, harmonica, keyboards and vocals.

At the start of the evening Hodgson tells us to forget about the world outside, enjoy the evening for what it will bring and to remember the importance of love in our lives. As he leaves the stage for the final time with a broad, winning smile of satisfaction, it hardly seems believable that just over two hours have passed in a wave of carefree and euphoric enjoyment where we have all laughed, danced, cried and sung along in varying degrees of happy nostalgia.

There is little doubt that Roger Hodgson is a supremely gifted song writer and musician; but what is also abundantly clear as we slowly leave the auditorium is that the power and infectiousness of the music we have enjoyed has been infused by a gentle man and a gracious spirit with whom it has been an absolute pleasure to share such a happy musical experience. 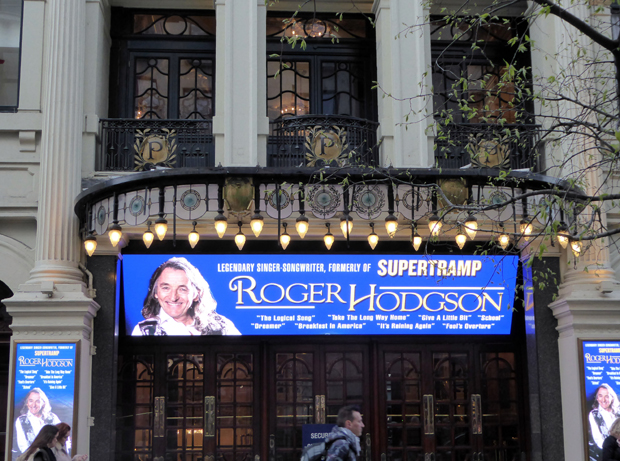 SETLIST
Set 1
Take the Long Way Home
School
In Jeopardy
Lovers in the Wind
Breakfast in America
Hide in Your Shell
Along Came Mary
A Soapbox Opera
Lord Is It Mine
The Logical Song
Set 2
Child of Vision
Death and a Zoo
If Everyone Was Listening
Even in the Quietest Moments
Only Because of You
Babaji
The Awakening
Dreamer
Fool’s Overture
~ Encore:
Had a Dream
Give a Little Bit