What better thing to do on a crisp Autumnal evening in ‘That London’ than to stroll – on foot, mind – to Ye Olde Sheherd’s Bush Empire (it’ll never be an ‘O2’ thing for me!) for a convivial evening of musical entertainment. Unusually it was a case of “well I’m in town, what’s on?” and scanning the listings revealed a number of interesting options, including Elbow frontman Guy Garvey celebrating the release of his debut solo album, Courting The Squall, not far from my hotel. I like the bits of Elbow that I’ve heard but I’m certainly not an expert and remain unfamiliar with most things related to Garvey & Co., but it was an enticing prospect so I decided to give it a go.

The queue of early arrivals was still shuffling inside when I got there and, ticket purchased, I joined them, security seeming slightly tighter since the terrible events in Paris a few weeks earlier. Inside, pint of Guinness in hand, I settled in at the back by the bar to see what might occur. 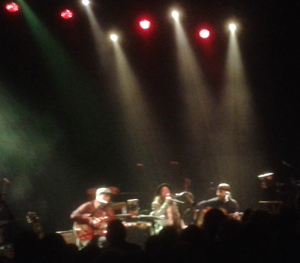 Introduced by Mr Garvey himself, at a little after 8 The Plumedores ambled on to sit at chairs arranged along the edge of the stage; three men, two hats (one with an extra long feather), two guitars, two beards (one MUCH bushier and more “Backwoods” than the other) and a collection of unexpectedly rootsy blues/folk numbers. Later I realised that this is the work of Elbow guitarist Mark Potter who with singer and harmonica dude Danny McTague and fellow guitarist Dean Casement make a very pleasurable foot tapping noise. If you’re familiar with the Coen Brothers’ film O Brother Where Art Thou?, think a more laid back and less vigorous Soggy Bottom Boys. Prog this is not! Coming out of a box, the über-basic and unwavering bass/hi-hat/bass drum rhythms only varied in tempo from track to track and this could have got a bit wearing but the quality of the songs and Danny’s good humour made for an enjoyable set. Guy appeared again to help with some double harmonica action and the band received an appreciative response. 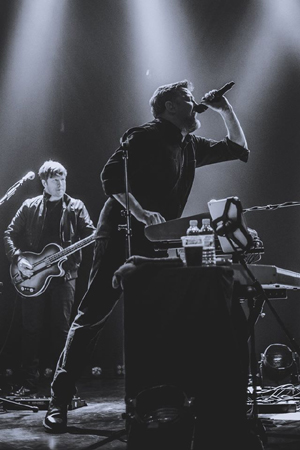 Moving into the throng and standing near the stage it became obvious that the evening was not too far off a sellout, at least at the Empire’s lower levels, the 30-somethings taking the majority with more women here than most of the gigs I attend! At around 9.15 the lights dimmed and the band took their places one by one. From my spot I had a very nice view of drummer Alex “Reeeeeeves” Reeves and bass player Nathan Sudders stage right. Garvey prowled the centre with guitarist Pete Jobson to his left and the multi-talented trio of Victoria Rule, Sarah Field and Anna Kirby covering sax, trumpet, keyboards, percussion and backing vocals between them.

Before a simple backdrop, the six-piece band were more than capable of supplying the support that Garvey’s new music requires as they showcased the whole of the Courting The Squall album in the main set. The album’s final track, Three Bells, moved to opener to make for a low-key yet captivating introduction, an enthralling start that sparked my interest with its atmospheric glow. Lead single Angela’s Eyes changed the dynamic and bedded the set in beautifully, the rhythmic nature of the album coming through with spiky shards of guitar from Jobson. The rhythm section deserve special mention for their varied work throughout the set, one of the highlights for me.

The music remains close to Elbow’s penchant for experimental melody with Garvey the master of ceremonies and a garrulous host. He was clearly among friends and supporters and loving it, which made for a lovely atmosphere with many laughs to be had. His voice, such as on the delicate title track, conveyed the beautiful words perfectly in a physical and emotional delivery that made for an absorbing performance. I’m glad that I got to witness it and I’ll certainly look out for the man and his band in future. 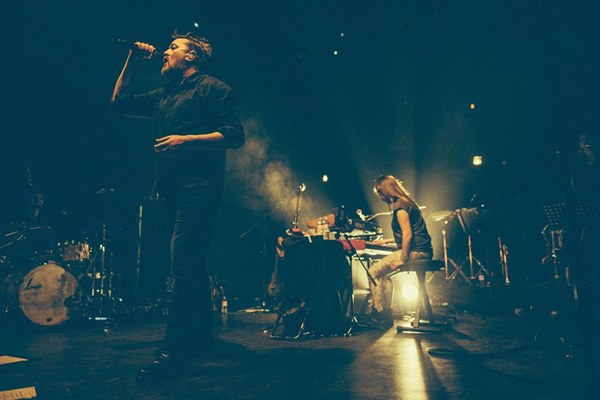 Jazz rhythms propelled Harder Edges, another highlight with the brass section coming into its own, things slowing down for a delicious Unwind, all of the players providing backing vocals in an often sparse performance that allowed the music space to breath, the band delivering with style. Juggernaut is just a beautiful song, a lyrical feast that was delivered to perfection tonight. Likewise Yesterday, the variety of Garvey’s album being underlined by the smoky late-night jazz of Electricity, driven by sax, piano and brushed drums. 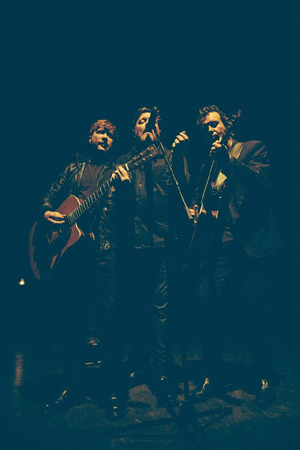 The “all mates together” feel of what was a very warm performance came through in the between songs banter and Jobson’s laugh out loud solo spot. Mark Potter returned to the stage to join Garvey for a stripped down acoustic guitar and voice version of Elbow’s Great Expectations but the encore of The Ink Spots’ classic I Don’t Want To Set The World On Fire almost stole the show, Garvey crooning it up at the front of the stage in close formation with the guitars of Sudders and Jobson, the former struggling to stifle his laughter.

Before the inevitable encore we got the rousing stomp-along of Belly of the Whale and then a beautiful Broken Bottles and Chandeliers, Garvey conducting the audience through a quite lovely harmony sing-along which ended the set perfectly. The repeat run-through of Angela’s Eyes as final song of the evening was a little odd and something of a missed opportunity as what would have sent the crowd home on a cloud would have been a stylish reworking of an Elbow classic. As it was the applause was loud, honest and heartfelt at the end but I found it very strange that Garvey still hadn’t made it into the wings before it had died. It seems that the audience had enjoyed what they’d been given but didn’t need any more. Maybe it says a lot about attention span these days!

As a slightly distant observer I thoroughly enjoyed the whole show which didn’t flag at all and showcased Garvey’s work for this new initiate. It was uplifting and delivered beautifully but it didn’t leave me stunned to silence like some of the shows I more regularly attend. It seems that I do know what I REALLY like after all. 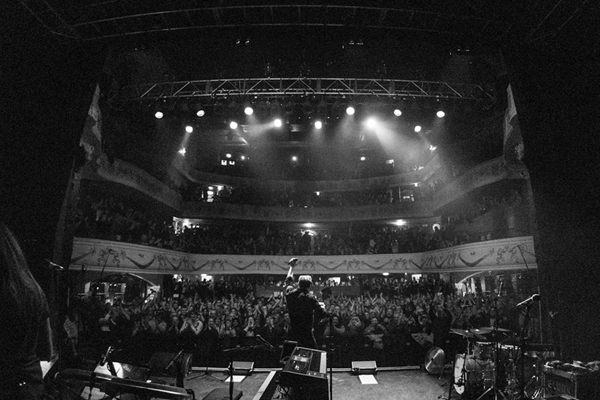