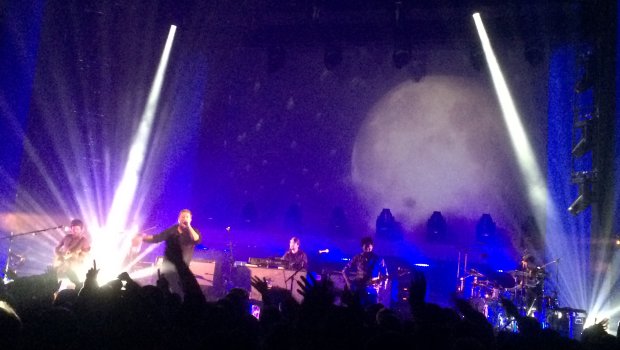 Ain’t music a strange thing. You can be in a room with 2,000 people and a song starts to play and suddenly you are in a completely different world with your heart broken… again, but you still leave with a smile on your face. That’s what a band like Elbow can do to you. They played a packed Plymouth Pavilions and mesmerised the audience with a glorious combination of subtly expressed emotion and dramatic power, all delivered with skill and charm. They have officially become a ‘National Treasure’ and front man Guy Garvey is the Crown Jewel, exuding wit and avuncular wisdom, singing with great feeling and warmth. 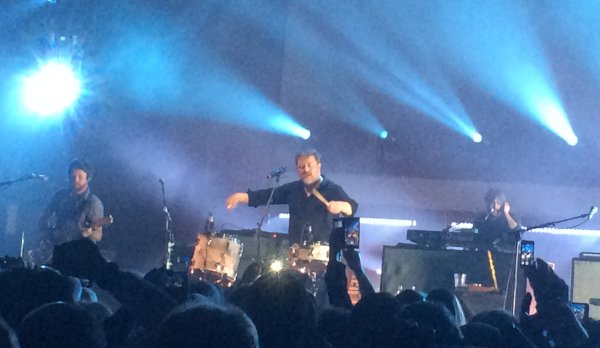 Elbow sprinkle a healthy dose of new songs amongst the set with a percussive Gentle Storm kicking off proceedings, a song with a title which poetically sums up Elbow at their best. The Bones of You from their breakthrough Mercury Prize winning album The Seldom Seen Kid ignites a sea of clapping hands, and the gig takes off. Fly Boy Blue / Lunette and New York Morning from the under rated The Take Off and Landing of Everything are resplendent in a live setting, accentuating that Elbow are most at home in front of a crowd. All Disco is a particularly catchy song from new album Little Fictions and it compares well with their more vintage material. The shimmering beauty of Mirrorball is dedicated to “Anyone who’s Married” and may be a reference to Garvey’s recent marriage to actress Rachael Stirling. The loved-up marital references continue later with the gorgeous Great Expectations, which imagines a wedding on a bus in Stockport, the oldest song of the night from Leaders of the Free World. 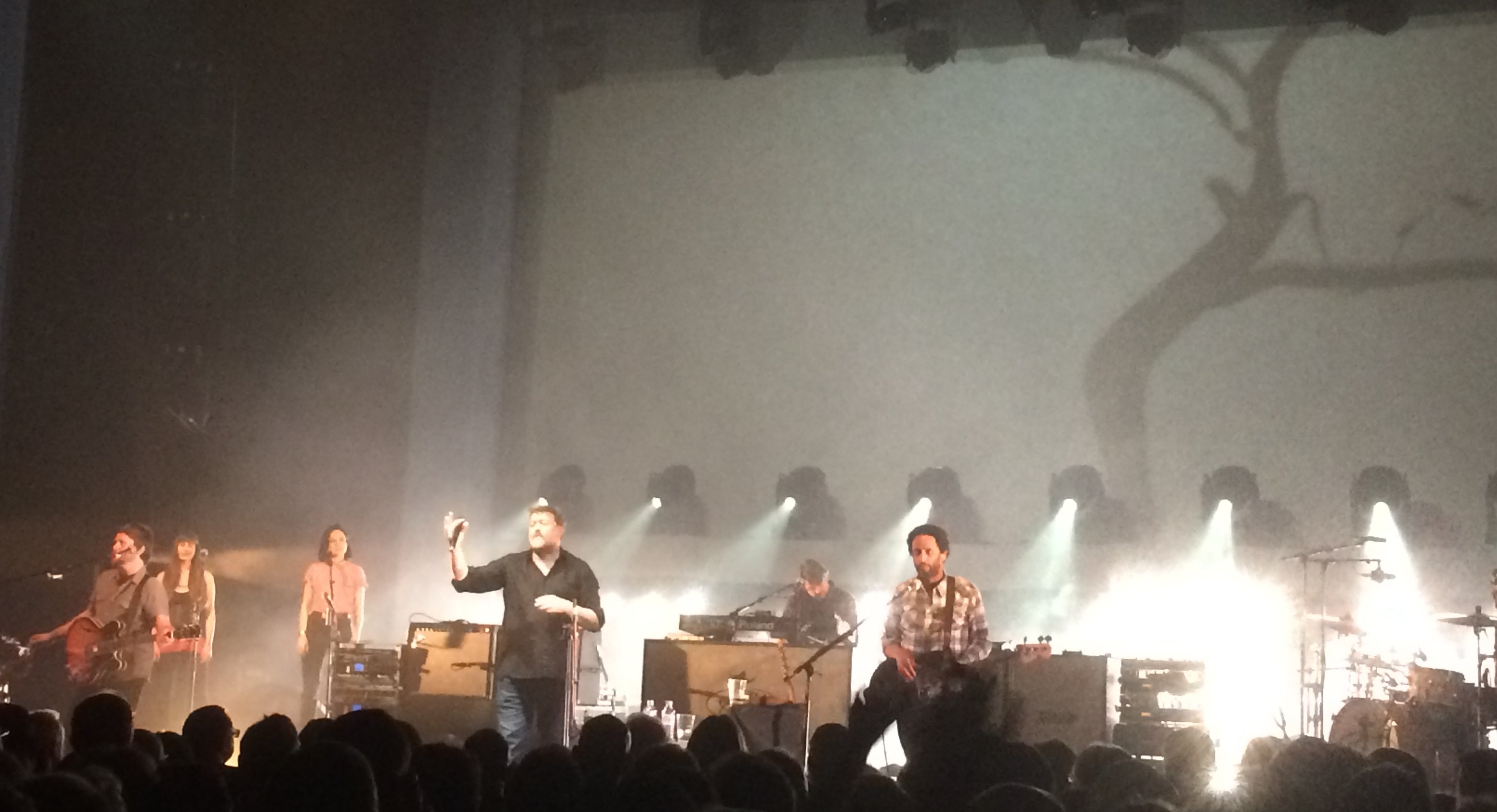 The title track of their latest album Little Fictions takes things in a decidedly more complex, lengthy and darker direction. The atmosphere is lightened by the whimsical nostalgia of Lippy Kids, which has the Devon crowd whistling along heartily. Elbow’s long term drummer Richard Jupp recently departed the band, but his replacement for this tour Alex Reeves drums superbly all evening, particularly on a spectacular version of The Birds. This is another song transformed in a live setting, featuring an outstanding angular electronic keyboard section by Craig Potter. 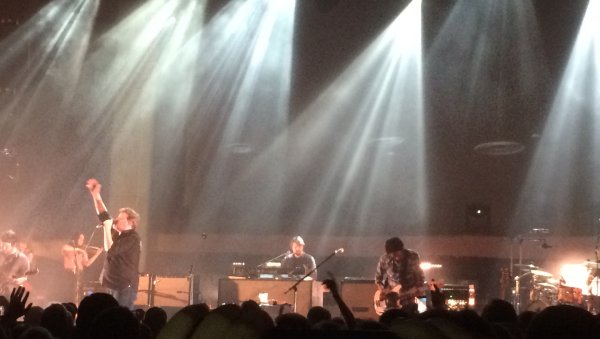 Elbow have the knack of writing a song which immediately burrows it’s way in to your brain and almost as soon as you’ve heard it you are singing along like it’s an old favourite, which is borne out by the massed singing accompaniment to new song Magnificent (She Says), which is… Magnificent! However, such crowd singing is nothing compared to the entire crowd singing joyously what has now virtually become a new National Anthem, One Day Like This ringing out with the violinists driving along this bona fide modern classic. 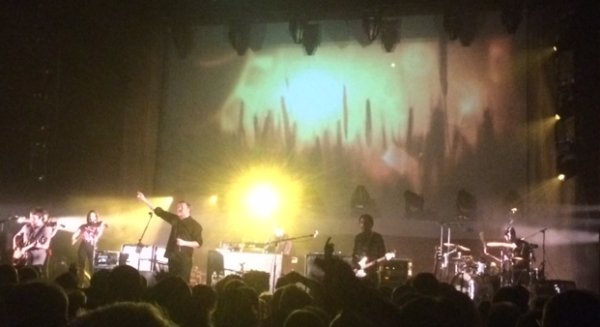 This wonderful gig ends with Mark Potter’s guitar grinding out the unmistakable riff for Grounds for Divorce, during which the crowd erupts into yet more singing, with Pete Turner impelling it along with his usual deft bass. Circus ringmaster Garvey maniacally pounds along on drums, charismatically leading his Elbow tribe to the end of their ecstatic ritual. What a band, what a gig!

…And what broke my heart?

As soon as the penultimate song of the evening, My Sad Captains, commenced I was transported instantly back almost three years to the morning after my Father’s funeral. I woke very early in the pub my family had stayed at after the wake – the pub where we as a family had gathered for so many family events, just literally down the hill from my parents’ bungalow. We had spent a good evening, remembering our father over a few beers as he would have wanted. Early the next morning I decided to take the lovely floral tributes and wreaths left over from the funeral up to my Father’s bungalow, and place them on his front lawn as a tribute. They were too beautiful to just throw away.

Coincidentally, I had literally just bought Elbow’s The Take off and Landing of Everything album and had been playing it in the car. As I drove up the hill with a heavy heart My Sad Captains automatically played on the car stereo and a strange thing happened. My brother’s wonderful funeral eulogy the previous day had been entitled ‘We Come This Way But Once’, a favourite saying my Father often used to say.

Therefore, there was clear resonance after a night of drinking and reminiscing about my Father to hear the words of this song filling my car as I went on my short and solitary personal dawn pilgrimage:

“Another Sunrise with my Sad Captains
With who I Choose to Lose my Mind
And if it’s all We Only Come this Way but Once
What a Perfect Waste of Time.”

When Elbow elegiacally embarked into My Sad Captains I was no longer surrounded by 2,000 singing gig goers in Plymouth. I was totally and emotionally right back on an idyllic Devon hill by a Norman Church in the Spring sunshine laying a floral tribute to my dear lost Father, and amidst that crowd I relived such deep feelings of loss and sadness. I cried more than I have in a while.

Strangely, my Father never heard that song as it was released just after he died, but I will forever associate it with him. That’s what a band like Elbow can do to touch your heart and soul, and I thank them for it.