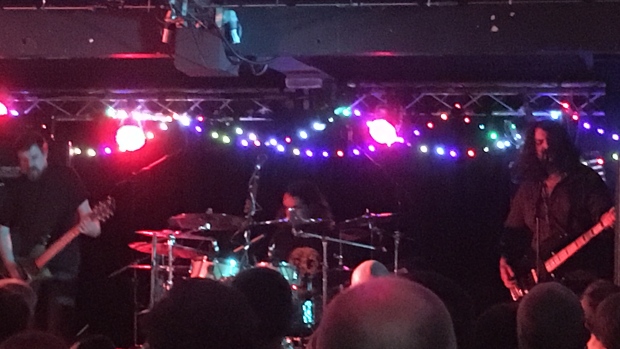 Awooga start the evening with an entertaining set of heavy psychedelically tinged rock. Hailing from Sheffield they are signed to Rockosmos, the label of Amplifier mainman, Sel Balamir, and there are clear parallels with Amplifier in their sound, albeit at a much heavier and more relentless end of the spectrum. Temporal, the opening song from their new album Conduit, soon has the place rocking and they sweep the crowd along with their wall of sound. Thief, from their 2016 EP Alpha and the only song played tonight not from the new album, continues the sonic assault. Later in the set the epic Witness displays a more subtle side to their music, adding some light to the shadows, which is underlined by the trippy closing number Otherside. Definitely one of the better support bands witnessed, and the album was duly secured from this promising band who nicely warmed up proceedings for Amplifier. 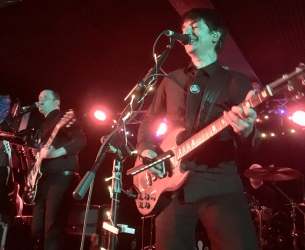 The last time Amplifier played the Exchange, in 2015, they had such an outstanding gig that they released the show on Bandcamp as a live album… and somehow Sel Balamir and his band surpassed that electric set with another magical night in Bristol in a packed venue. This was a ‘replacement’ gig for the one lost to the ‘Beast from the East’ snow deluge earlier in the year, so it was rather a one off, and with it also being a Bank Holiday weekend these factors may have contributed to the energy of the show and the rather ‘refreshed’ nature of a crowd clearly up for a good night… or maybe Amplifier are just this bloody good every time they play live!

Amplifier released the psychedelically infused Trippin’ with Dr. Faustus in 2017, but apart from two songs from that album, the rest of the setlist is apparently chosen by the fans, and subsequently it is a set to die for – chock full of the highlights of their long and varied career, displaying their range of sounds and ever changing nature. Matmos from Sel’s reportedly favourite album, Echo Street (2013), gets the evening off to a gentle, dreamy start. A sudden “Hit it!” changes gear entirely as they thunder into O Fortuna from Insider (2006). The tempo and temperature rise even more with the crunching anti-war/anti-corporation Panzr, and Sel is in full control of a very tight band. Meanwhile the crowd is ‘riding shotgun’ on his musical blitzkrieg tank, chanting along with the band: 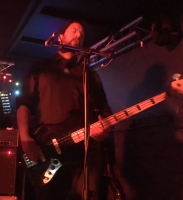 After such a bludgeoning the band clearly felt the crowd’s brains were fried enough to shoot them into space with the driving, pulsing, psychedelic extended trip of Interstellar from their epic The Octopus album (2011). Tam Ali, whom had already played with his own band Awooga, was particularly outstanding on bass.

The buzzing, sinister power of Open Up from Mystoria (2014) takes the gig off in a different direction, and then surprisingly they pull out the more atmospheric and rarely played Continuum from the 2005 E.P. The Astronaut Dismantles Hal – this was really going to be a night of surprises from throughout their whole career.

After such a blistering start it was time for the band and crowd to have a relative breather – but what a beautiful interlude as they played one of this reviewer’s favourite Amplifier songs, the sumptuous and smouldering Where the River Goes. This wonderful performance featured great harmony vocals and fantastic guitar interplay between Sel Balamir and Steve Durose (formerly of Oceansize). The climax of this epic sounding song is a showcase for the titanic drumming of Matt Brobin, with Durose throwing more glorious guitar shapes across the crescendo. 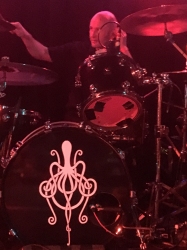 New album Trippin’ with Dr. Faustus takes its turn in the set with two groove laden psych rock numbers as the kaleidoscopic and relentlessly heavy Freakzone swaggers in on an avalanche of Brobin’s drums, whilst the chiming Kosmos (Grooves of Triumph) grinds in powerfully. This already outstanding set list just got better and better with samples and weird electronic feedback as Sel manually manipulates his great array of foot pedals, foreshadowing the musical Tsunami that is The Wave. Durose and Balamir trade guitar work and Ali’s bass is simply enormous in one of the top moments of a set filled with highlights.

Balamir’s banter is, as ever, witty and engaging – he and the band are clearly having a great time, and it’s infectious as they play an extended set. The marvellous tones of The Octopus continue the “water-based set”, as Balamir puts it. The classic Motorhead, from their first ever album in 2000, is dedicated to the drummer who has been with Sel throughout Amplifier’s career, and for the finale the band again delve back to their eponymous debut for the heavy psychedelia of Airborne, after which Balamir remarks upon the skills of Tam Ali, whom he feels must be “on musical viagra!”

This reviewer’s dream setlist is more or less complete when they return to the stage to the clamour of the crowd and launch into One Great Summer, the song which turned me on to this band but hasn’t been played for a while. It’s a wonderful mixture of dream-like imagery, anthemic cosmic lyrics and restrained but powerful rock. Having put this little corner of Bristol almost literally into orbit with a truly outstanding rock show, full of energy, musical excellence and mind-altering image-filled music, there was only one song to finish the set – UFO’s, a subtle and dreamy song which feels both heavy and weightless at the same time. This typifies what a brilliant live band Amplifier are, able to rock out with the best of them, but also capable of touching the spirit with subtlety and skill.

If you haven’t yet seen Amplifier then make a point of doing so. They are excellent on their varied albums but live they are an absolute revelation… they really should be playing much larger venues. If you have a chance to see this band in your area just do yourselves a favour, open up your mind and just Go!

[Photos by Leo Trimming plus one courtesy of Tony O’Rourke]