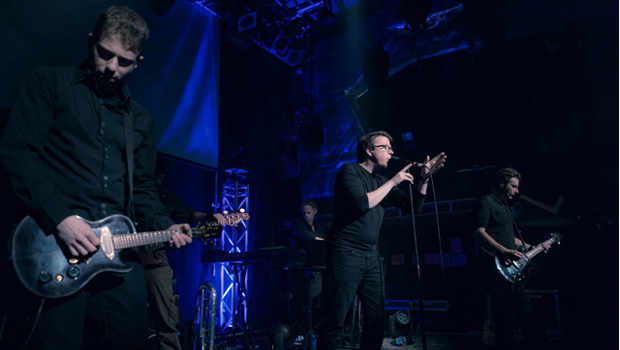 Photos by Gabriele Peloso (for rebelrebelmusic.com) and Leo Trimming

A packed Islington O2 was treated to a fine KScope double bill as iamthemorning and Gazpacho entertained and fascinated a very receptive crowd. 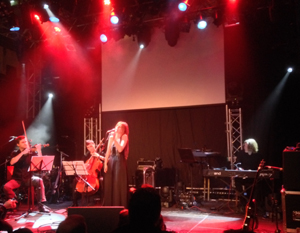 iamthemorning bewitched the attentive audience with their delicate ‘Chamber Prog’ featuring the delightful Marjana Semkina on vocals and Gleb Kolyadin on piano, wonderfully supported by a cellist and violinist. The crowd were very quickly drawn in to the charm of their music, and you could hardly hear a pin drop all through the show. Semkina’s voice was enchanting across a finely played string and piano setting. Her crystal clear voice has obvious parallels with Kate Bush or Tori Amos but Marjana has her own distinctive style, backed by a highly skilled and sensitive band. She also had a charming manner with the crowd, comparing the O2 audience very favourably with their only previous London appearance at a metal festival, which was a peculiar thought! She introduced To Human Misery as a Russian toast, much to the amusement of the crowd. Her self-deprecating approach continued later as she introduced 5/4 as their ‘only cheerful song’ before adding that ALL their songs are about pain and death, including 5/4… but it’s cheerful! She then proceeded to engage the crowd in double clapping for the song, but in truth she had the audience eating out of her hand. Beautiful piano/vocal piece Os Lunatum was introduced as being a song about being dead, but it was clear that this was a fine young Russian band which was very much alive and full of promise. Brisk business at the merchandise stall soon sold out their (surprisingly rocky at times) album and underlined what a success they had made of their appearance on this tour – one of the finest support bands this reviewer has seen.

Gazpacho opened up their set with a brace of songs from their new album Molok and immediately showed their class and confidence as a live band, delivering complex, atmospheric songs such as Park Bench and Choir of Ancestors with aplomb. Backed with interesting but not overpowering visuals, initially focussing on strange machines and infinite floating numbers this was a captivating live experience which grabbed hold of the audience from the start. 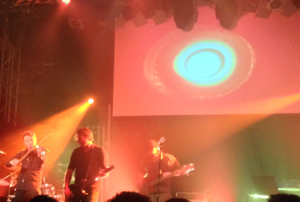 Their first trip into their back catalogue was a treat as Gazpacho bathed the stage with orange and red light to complement the Eastern tones of classic The Walk (parts 1 & 2). This was a particular showcase for multi-instrumentalist Michael Kromer on violin, interplaying dramatically with the fluid guitar of Jon Arne Vilbo. Defence Mechanism from Missa Atropos followed and highlighted the power and dexterity of Lars Erik Asp on drums. This one song encapsulated so much of what marks Gazpacho as a fine band as Thomas Alexander Andersen’s delicate keyboards built slowly to a fine guitar crescendo from Vilbo, and Jan Henrik Ohme’s powerful voice then subsided into a sensitive coda. 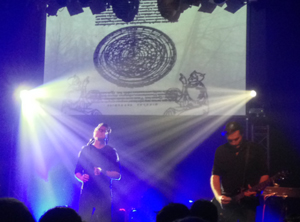 The next part of the show was possibly one of the most engaging and startling parts of this concert. The Jewish Klezmer inspired music of The Wizard of Altai Mountains was carried along by Kromer’s playful violin, conveying the fantasy world of a child living under the shadow of discovery by the Nazis in war time Prague. This moved with the sound of a hospital respirator into the dark majesty of another Demon track as Gazpacho entered Death Room. Influenced by personal loss this is a powerful song soaked in atmosphere and emotion. However, midway through this epic Gazpacho shone some light on the subject by engaging in a comic acoustic ‘Oompah’ section as Vilbo took up a tiny ukulele, Andersen played a peculiar childlike Kazoo-type instrument, and bassist Kristian Torp parped away on a tuba. They truly stick to their belief in ‘Different Music’. This is a band which explores dark corners but they retain a healthy sense of humour which is just as well given their subject matters. After Death Room it was perhaps appropriate for Gazpacho to delve in to March of Ghosts, seguing the last two elegiac and dramatic sections of Hell Freezes Over. 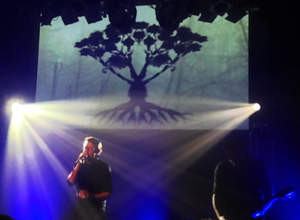 The atmospheric story of Molok returned with Know Your Time, Asp’s primitive style drumming introducing the song before Vilbo’s guitar soared upwards to meet a plaintive violin. The favourite Gazpacho album of this reviewer is Tick Tock so it was great to hear the beautiful rolling intro of Winter is Never, a particularly fine showcase for the vocal range of Ohme, and a clear favourite of the crowd. After the band introductions the show shifted up another gear of excellence as Gazpacho announced that they could not have a concert without focusing on their first truly classic album, Night. Chequered Light Buildings throbbed with power, startling lights and skyscraper visuals. Kromer’s violin and Vilbo’s guitar combined with great effect as the song grew in magnitude and impact. There was only one place to go after that climax, Upside Down as Gazpacho ensured that this was truly a Night to remember. 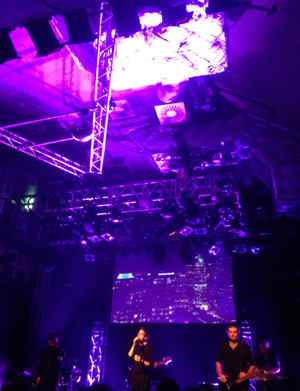 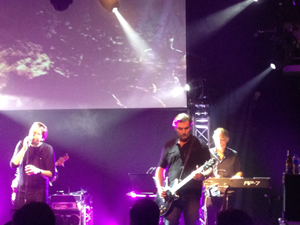 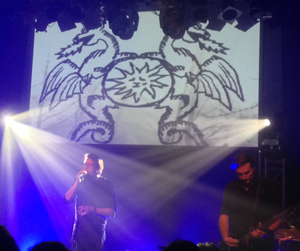 For many bands choosing a classic from their past would have signalled the end of the main show, but Gazpacho do not follow the common path and showed their complete confidence in the quality of their new material to close the show with the finale of the new album, Molok Rising. Commencing with strange sounds and 10,000 year old ‘singing stones’ Gazpacho cast a hypnotic spell over the audience as mesmerising visuals of ancient stone buildings, artefacts and mysterious floating numbers over equally hypnotic but restrained music, largely coloured by Andersen’s keyboard skills, conjured up the evolution of the doom-laden Molok machine. The machine and the concert finally reached its dramatic conclusion with a thunderous, reverberating sound – I am glad to report that the songs end did not presage the end of Universe but it certainly felt like the Earth moved! 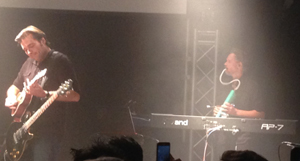 The crowd roared in appreciation and wonder at such a great performance from these Norwegian masters. A brilliant synthesis of sound and visuals played with great skill, precision and feeling by a band at the top of their game. Simply one of the best gigs of the year for this reviewer… and he’s seen some great gigs this year! After such cold drama Gazpacho show they can also exude musical heat and really rock with Desert Flight. However, Gazpacho cannot resist leaving the crowd with some atmospheric ambiguity and close the night with Vera from Missa Atropos. This builds in intensity until it’s last line, “The Hardest Thing You’ll Ever Do is Leave Here”, which sums up the feelings of this crowd who have gloried tonight in the fascinating world of Gazpacho. 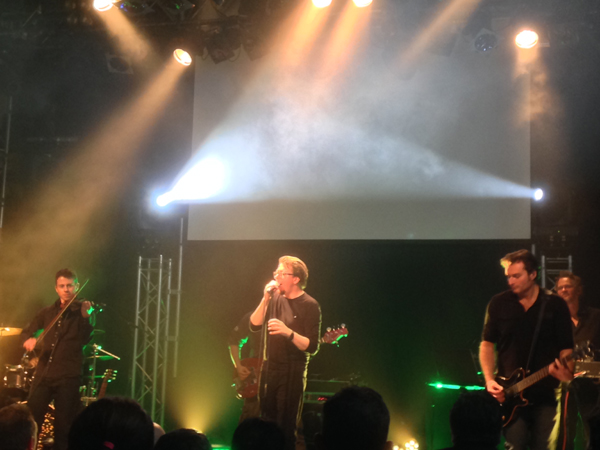 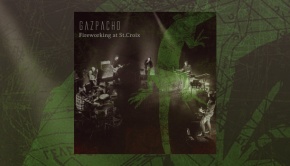 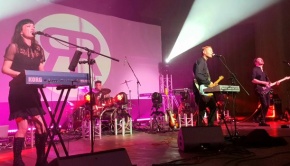 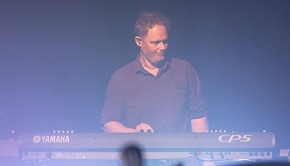