From strength to strength

For years no sign of life and then suddenly, boom, twice new studio work and even three live shows within exactly twelve months. Life within the Flower Kings is certainly no bed of roses. After previous (co-)headliners together with Spock’s Beard in December 2018 and a solo show in June 2019, on a cold December evening once again it’s the Number 1 prog temple in Zoetermeer that has the honour of hosting one of the best prog rock bands of the moment, The Flower Kings (TFK). With a recently released and well-received new studio double album Waiting for Miracles under their belt.

Some calamity preceded the Swedish concert series: Dutch band Kayak was originally scheduled as a joint headliner, unfortunately, Kayak’s leader/composer/keyboardist Ton Scherpenzeel recently experienced serious health problems and the band had to cancel the show. But no worries, new musical partners were found in Rikard Sjöblom, known from, among others, Big Big Train and Beardfish, and Russians Iamthemorning. However, disaster strikes again: as a result of a fall during rehearsals, TFK guitarist/singer Roine Stolt broke his collarbone. Always bad news, but if you’re a guitarist and about to play twelve gigs across Europe in fourteen days, no less than a small tragedy. But the 63-year-old Swede is a real trooper; seated, he made it through the show to a successful conclusion, without ever missing a single note.

Rikard Sjöblom is the first on stage, on his own. Previously the Swede has often performed at De Boerderij, but always with a band to accompany him, requiring some necessary adjustments to the arrangements. The songs were mainly kept to a minimum, which gave the performance an intimate atmosphere, and with a cross-section from the material of Beardfish, Gungfly and his solo work, each period passed by in about half-an-hour of playing time. Heaven knows how a guitarist can forget to bring his guitar along, but with a (small) guitar borrowed from Marjana Semkina, some (tape) loops and a keyboard, Sjöblom managed to warm up the audience sufficiently. Next time, however, I would prefer to see him perform with a band and with the original versions of the songs.

SET LIST
Guitar intro
The One Inside
Ghost of Vanity
Keith (The Son of Sun)
They Fade
Roulette
MUSICIAN
Rikard Sjöblom: Guitars, Vocals 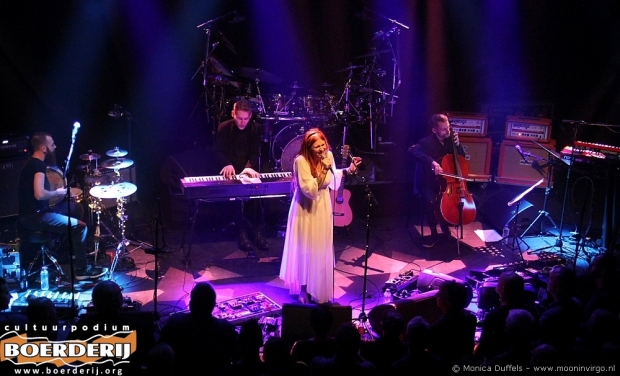 Then it is the turn of Iamthemorning, the chamber music/pop vehicle of Russians Marjana Semkina and Gleb Kolyadin. This time in an interesting semi-acoustic setup, in which the special, atmospheric and melancholic music of the band comes into its own. With a leading role for singer Marjana Semkina, a charming and attractive appearance in her white dress. The tattooed forest nymph has a voice that’s somewhere in between Kate Bush and Heather Findlay, aside from being a pleasant stage personality. 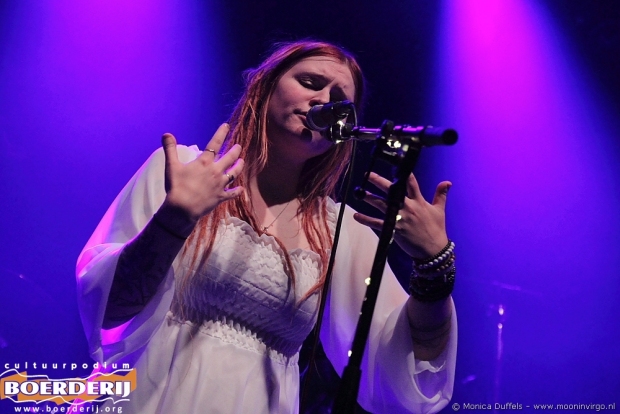 Tribute also to her great band with an instrumentation of drums/percussion, cello and the piano of the talented Kolyadin. Lots of sad music and lyrics, luckily humour is never far away, as witnessed by her introduction: “this song is about the demise of the world and that we are all going to die, one of our more cheerful songs.” The music, many songs from the new album The Bell, is well received by the audience, which mainly came for the main act this evening. 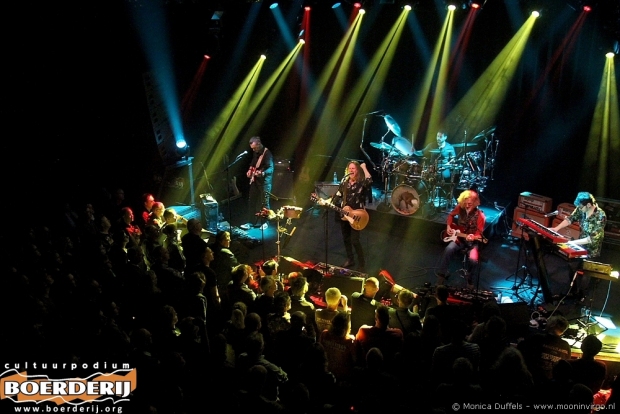 Then it is finally time for the main act as previously mentioned, Sweden’s The Flower Kings have been a well-established act within the prog rock genre for several years. The venue is filled with around 350 enthusiasts, tension about what is to come is palpable.

Under huge cheers, the band enters the stage at De Boerderij, while keyboardist Zack Kamins conjures up the beautiful piano sounds of opening track House of Cards from his instruments. Just like on the new album Waiting For Miracles, Black Flag is next in line, a strong song that unites the best of the old and the new band. The iconic The Truth Will Set You Free gets a powerful performance with brilliant keyboard work by Kamins and the formidable singing voice of Hasse Fröberg. Reingold’s bass solo meets with lots of applause, although a hint from Stolt is necessary to encourage the crowd. The song is played in its entirety, half an hour of heavenly prog. Stolt then takes ample time for the introduction of his fellow musicians. And to catch his breath. The Hammond organ of Kamins and the vocals of Fröberg are the most important ingredients for the new song Miracles for America. The wonderful guitar riff from Stolt in the middle section and the primal scream from Fröberg at the end make this song a potential live favourite for future reference. Another song from the new album, We Are Always Here represents a delightful chunk of swinging prog with great drums from Mirkko DeMaio, who increasingly makes his presence felt within the band.

My personal favourite is also dusted and polished: The Flower King, from the eponymous 1994 solo album by Stolt, contains everything that makes TFK what it is; melody, rhythm, dynamics, lyrics and, last but not least, a great and especially inspired solo by Roine – goosebumps. The song blends seamlessly into 1997’s Stardust We Are. Majestic symphonic rock, a baroque guitar riff, beautiful melodies, frequent mood and tempo changes, four-part vocals – the sky is the limit. The vocals at the end cut right through the soul. When the end of the show approaches, it is suggested, pointing at the injured Stolt, to proceed immediately with the encore, to the full consent of those present. Moreover, a crossing to England has to be made in the middle of the night, the show at the Scala in London is scheduled to take place the very next day.

For the encore, the band has opted for There Is More to This World, pure indulgence for the fans who react ecstatically. Then a small piano is carefully placed on the stage and room is made for the big closing event. For The Long and Winding Road, both Iamthemorning, Rikard Sjöblom and the entire Flower Kings ensemble share the stage. To jointly play a beautiful, disciplined, orchestral version of the iconic Beatles song. Including reading glasses and cheat sheet for Fröberg and iPhone for Marjana Semkina.

If this performance proves anything then it is the fact that the band as a whole has grown strongly; here we have a close-knit collective at work. The music is played with lots of focus, zeal and passion, the difference with the previous shows in November 2018 and June 2019, however brilliant, is remarkable. This is a true band, not some randomly chosen musicians in support of Stolt. The metamorphosis of keyboardist Kamins, in particular, is illustrative of this development. From somewhat timid hired hand to a full-fledged confident substitute for Tomas Bodin, who is particularly popular in TFK circles. The same can be said about the performance of drummer Mirkko DeMaio, hats off to both of them. The series of gigs in South America in the summer of this year may have been crucial for the regained cohesion. An excellent development, looking at the future. And then there is also a big chance of a new Transatlantic album in the short run, what more do you want as a true prog-fan?

[TPA would like to thank Monica Duffels for the photos used in this article.]