A completely seamless journey from our doorsteps out in the sticks, down to Euston, and on to Shepherd’s Bush Market tube station saw us arrive at the oddly named yet fine hostelry The Defector’s Weld, in good time for a catch up with the crew, and of course, ale and sustenance.

A while later and suitably refreshed we sauntered down the road to the nearby Bush Hall, an anonymous looking edifice from the outside that revealed Edwardian splendour concealed within, where we are greeted with an interior bedecked in ornate plasterwork, revealing its origins as a dance hall, and therefore a suitably appropriate setting for Tim Bowness and his abandoned dancehall dreams and other stories. 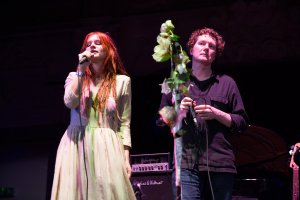 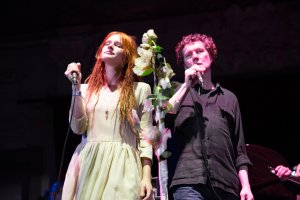 For those who do not know, the Existential Doyen of Doomed Romance, or Tim Bowness as he is known to his friends, writes emotionally charged and wracked mini epics dredging the slough of despond in such an alluring fashion as to make it seem like the ideal location for a long weekend of fun and frolics. 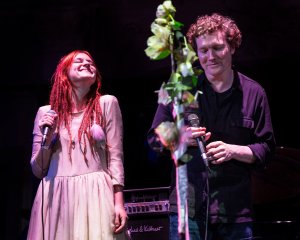 His set opened with a solo spot for electric violinist Steve Bingham’s evocative looped strings, playing the opening section to Only Rain, from the 2001 no-man album Returning Jesus, the band eventually joining in for a soulful rendition. With a long and deep discography, Tim can dig up surprises like this, which serve to make his set lists wonderfully unpredictable. On the other hand, you could have bet on the fact that he would treat us to Time Travel In Texas, which has become something of a live staple in recent years. Angsty, angry, and nervous, Time Travel In Texas sparks with fraught electricity and reveals the tail side of Tim’s coin that is headed Bereft Heartbroken Despair. 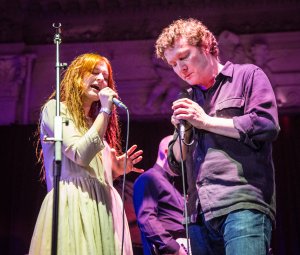 Tim’s set is a mixture of no-man songs and more recent compositions recorded under his own name, aided by his band which has stayed relatively unchanged since the later no-man years, and the natural chemistry of the players is there for all to see. Michael Bearpark played some coruscating lead breaks, and Stephen Bennett conjured many textures from his keyboard rig, including that of a roaring Hammond in one song. The two drummer/percussionist set up, using Evan Carson of the iamthemorning band in addition to Andrew Booker, gave the songs extra subtleties and depth. 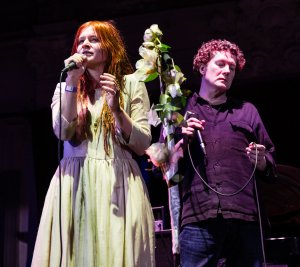 Tim was joined by Marjana and Gleb of iamthemorning for a couple of songs, which worked really well. The final song in the set, Days Turn Into Years, was one of those, from his album with Peter Chilvers entitled California, Norfolk that “two and a half people bought”. From the cheers it seems they were all in the audience, and the “half” had multiplied somewhat. I confess I only bought it when it was reissued, so it wasn’t me, guv! Later, and in typical esoteric fashion Tim joined the headliners during their set for Beautiful Songs You Should Know, choosing iamthemorning over his own band for this live debut of the no-man song. He also reappeared with Steve Bingham during the encore for a version of his song Sing To Me, when he introduced Marjana and himself as the “avant-garde Sonny & Cher”, provoking muted chuckles from the audience. 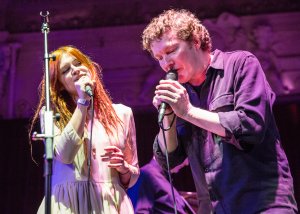 Tim’s dry wit is always good for an amusing band introduction. Telling us that during the previous gig in the Netherlands he introduced bass player Pete Morgan as “Colin Edwin”, to non-ironic cheers from the Dutch crowd, he continued the theme. Tonight we had “Phil Collins and Gavin Harrison” on drums and “Richard Wagner” on violin. The allegedly more sensible band intros followed, and according to Tim violinist Steve Bingham has decreed that he be addressed by his family as “The Maestro”, and Michael Bearpark was of course, Professor Michael Bearpark (this is actually a fact, for Mr Bearpark is a boffin of some note), while drummer Andrew Booker is so posh he “eats swans every day”, a habit he has kept up since the last time I saw this band live, it seems. Marvellous! 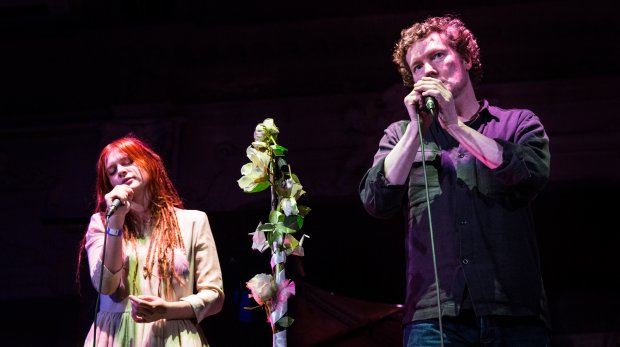 We had been treated to another fine set by Tim Bowness and his trusty band, and it is a shame that in a world where the merely competent is all too often lauded as exceptional and the only thing that really sells is nostalgia, that real talent like that possessed by Tim goes largely ignored by the deeply conservative prog crowd. Ho-hum…at least tonight’s audience seemed to enjoy it, although quite a few inexplicably only turned up for the second half of the show. They don’t realise what fine music they missed.

The Russian duo iamthemorning are largely an unknown quantity to me, as I only properly listened to their fine Lighthouse album the day before the gig. The album, as you no doubt know, has won Prog magazine’s prestigious “Album of the Year” gong, and judging by the sell out crowd, this is a band whose profile is deservedly high at the moment. I will leave our Russian Correspondent to go into greater detail, but my impression was that had Rachmaninoff led a pop band, this is what they would have sounded like. Far more powerful live than on CD, I was quite taken with their “ancient yet modern” sound. 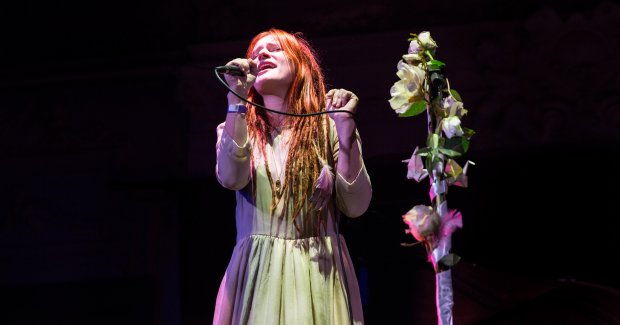 Iamthemorning appear to be on a well deserved rise in their fortunes at the moment, having recently won the Album of the Year at the Prog magazine awards, for their marvellous third album, Lighthouse. If you have not heard it, I heartily recommend you check it out. 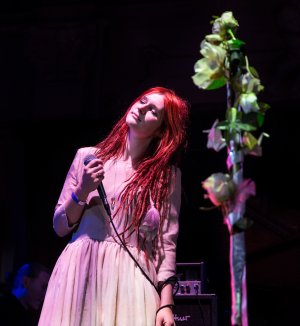 After the amazing set from Tim Bowness and his band, the audience were buzzing with anticipation for Iamthemorning’s headline spot. As we waited for them to take the stage in the lovely surroundings of the Bush Hall, it gave us time to soak up the atmosphere being generated here tonight. An intimate seated setting, the stage set with Gleb’s piano to the audience’s left and drums to the right with cello, violin and bass set up just in front. Marjana would take her place off centre stage towards the left near Gleb, from where I was seated I had an unobstructed view of them both.

The set opened with Inside, delivered with a consummate skill and precision. Marjana appeared a little nervous to start, but quickly settled once she began to engage with the audience between songs. Her interactions and introductions to the songs were warm and at times funny, introducing To Human Misery as something that as Russians they know a bit about! At other times she discussed the subject matter of the songs, highlighting the fact that they are always about mental illness and death. Despite this Iamthemorning have the ability to connect these subjects to the most engaging and beautiful music. 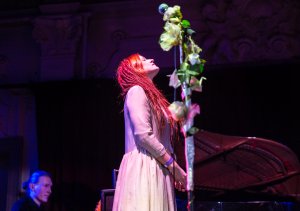 Throughout the performance Gleb’s playing was superb, at times it sounded as if he had more than two hands, such was the complexity. Marjana was in great voice, showing her wide range coupled with a wonderful stage presence that didn’t distract the audience away from the other band members. Her charming and engaging interaction with the audience soon won everyone over.

After the first four songs, the collaborative feel of the night continued as Tim joined them onstage, treating us to a superb version of the no-man’s Beautiful Songs You Should Know, which Tim reliably informed us has never been played live before – and after the song had finished Marjana stated, with a playful little smile to the audience, that it was a good idea of hers to play it. The sound quality was excellent, the balance between the strings, bass, drums and Gleb’s magnificent piano work allowed each instrument to make it voice heard, couple that with excellent performances all round and it was a enthralling performance. 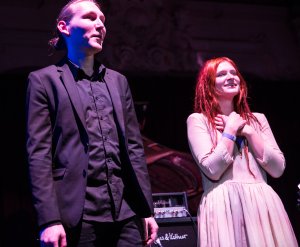 The set list was constructed from all three of their albums, visiting each in equal measure, and such was the effect that this band create that the end came in what seemed much too short a time. After rapturous applause and a standing ovation, they returned for the encore, joined once more by Tim to treat us to a wonderful rendition of his Sing To Me from the Stupid Things That Mean The World album, a moving and classy song, beautifully performed by all, Marjana singing the chorus, her voice fitting so well with Tim’s to give us a fitting end to the evening alongside their last song of the night, Os Lunatum.

Tonight the band proved why they deserve all the plaudits that have come their way, for me this was a moving, magical and fascinating night. Their music, tinged with influences from folk and with occasional classical touches, is delivered with a Russian flare that needs to be more widely heard, and I hope that this will be the case. A wonderful evening, well worth the effort of the long round trip from South Wales. I’m certainly looking forward to the next time. 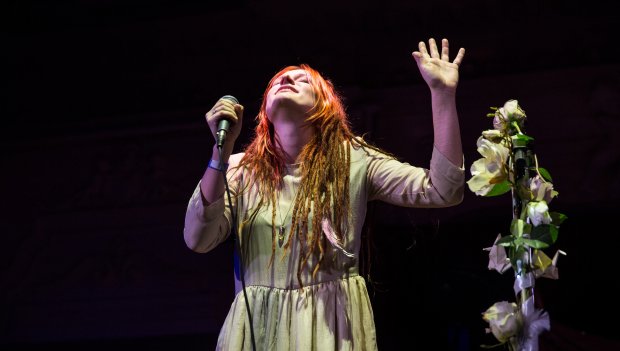