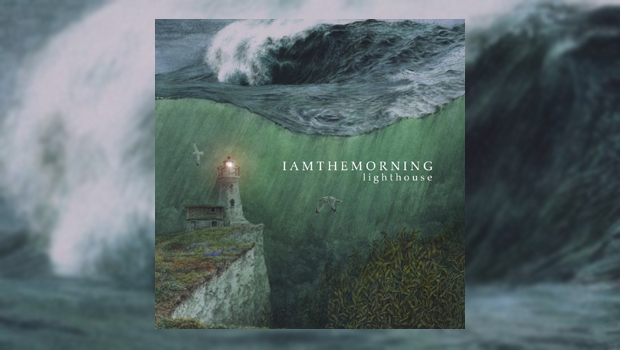 It doesn’t seem any time at all since Belighted, Iamthemorning have been added to the dictionary and no longer cause spellchecker to throw a wobbly (not that it needs much encouragement). I love Belighted, easily in my top ten for 2014, so Lighthouse, that difficult third album…

Lighthouse continues the journey, with its Beachy Head cover, dark psychological themes and sumptuous music it might be hard to follow up Belighted. It isn’t – it surpasses. Described as Progressive Chamber Music it engages in a way like very little else; our own Roger Trenwith calls it “Rachmaninoff meets Kate Bush, and they lick each other like puppy dogs” – and he has a point, but irrespective of that the sum of Gleb and Marjana’s work adds up to more than those rather beautiful parts, Piano Concerto No.2 being a favourite. If we go down the “sounds like” route, I find there is an ethereal folkie element, like Clannad but not as far as Enya. Marjana has a stunning voice and I could listen all day – and have. But then I could equally listen all day to the music alone, Gleb’s efforts are equally stunning.

This is universal music, in that I mean music that has no boundaries; you would think that it might betray its national origins, but it doesn’t. Like its predecessor, Lighthouse is best consumed in a single sitting. I’m listening to the download through a Sony 5.1 system, Tannoy speakers, and a laptop, it is rich, textured, and I am told that it sounds even better in the CD and 180g vinyl formats. Between it and Red Bazar, unless duty calls, this strongly forms my moments of pleasure over the past couple of weeks.

I Came Before the Water, Part 1 eases us in to the album, clear notes, crystal voice, two combining as one. Too Many Years highlights why the piano is called a percussion instrument, driving both beat and melody, it has depth, and warmth. It would be easy given the themes the album touches upon, for the accompanying music to be stark. Libretto Horror is the Kate Bush-esque track, but different enough from Kate to standalone. Edgy with a staccato style, a sense of light and dark, never quite sure which side of the force you’re on here.

Lighthouse, the title track, and Marjana shares the vocals with Maruisz Duda of Riverside. There are guests on this album but no distractions, they are used more to maximise the impact of the songs and I can find no weaknesses here; wrapped in a duvet of audio comfort, the sounds go round and round, rather than the rotation of an album, with one ear on the tune and one eye of the keyboard producing this script. This delights every time, through different playback equipment I find further nuances with each listen.

Chalk and Coal drifts into jazz and film noire areas, this is only in stereo and I can only imagine what 5.1 would do for this material. A vocal underlain with a soft spoken telephone conversation, the voices in her head. The closest I can get to a direct comparison is the music of Lamb, the way the parts are integral to the whole. Marjana’s voice differs much from that of Lou Rhodes of Lamb, but the effect is the same, drawn in and a spell is cast. Iamthemorning, put quite simply, are magic.

I Came Before the Water, Part 2 is a capella with honey dripping vocal intro, then layers build, orchestration and transport to heaven as the waters wash over you – definitely crying out for a 5.1 treatment. Whether during one of the vocal tracks or an instrumental, the album is an immersion, a treat for the ears, both unique and compelling. Gleb’s playing on Harmony – yes, absolutely, as the superlatives are swallowed in a wall of sound. Get your own dictionary, I am exhausted and exhilarated.

Post Scriptum repeats the instrumental melody enhanced with a vocalisation; my heart breaks, and my heart soars, and floating in the waters that came, I am left only wanting more. I have not met the charm that is Iamthemorning, but if they speak as well as their music does then I too will be rapt and in love.

I tend not to create lists of favourite albums in a given year, each moment being just that – a moment. I think this year may have to be an exception, no ranking from one to ten, but Lighthouse is unlikely to be supplanted in my top ten for 2016. I hope the opportunity to see them live occurs, and then I may too join the quivering wrecks of TPA reviewers who have seen and met the band. Should you buy this album? YES!! It is like breathing, something you just have to do. Oh, and the wonderful album cover artwork by Constantine Nagishkin is also available for sale on their Bandcamp page. I just may have to treat myself to the vinyl.