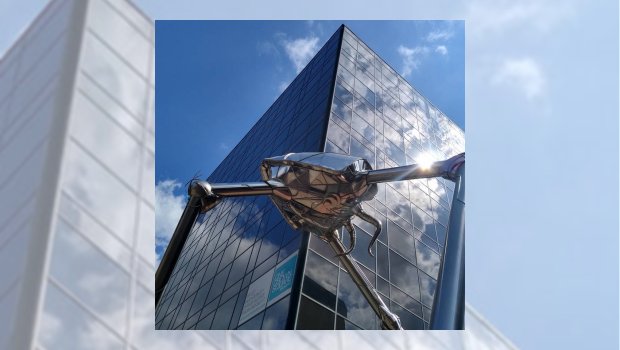 Some may recall that last year I reviewed Howard Boder’s Atlantis. Encouraged by the words, Howard has teamed up with a friend from one of his original groups, taking the works of Erich von Däniken, alien conspirator and interpreter for the source of humankind, they embarked upon The Mantle, a progressive concept album. In 1968, von Däniken published Chariots of the Gods?, which was followed by several other books alleging than humankind was advanced by alien influence.

Wikipedia makes for an informative read for the pros and cons about von Däniken. This, however, is a good album, showing some signs of potential greatness should H.G. Wells continue and develop. They are playing the odd gig here and there, and based on this material they are worth looking out for. For your spondoolies you get nine tracks; six are positively palatable, three are exceptional and worth the purchase price.

The approach leads us in a Vangelis-like direction, with other bands and artists as reference points that form part of the progressive palette too. Combining keys and abstract sounds, there are nods towards Blade Runner, then just to confuse things, track two is Third, a reference to a close encounter of the third kind; one where a UFO has been spotted, but going further to include a visual confirmation of an animate object that is associated with the UFO. Musically, I would say there is a Pink Floyd influence, although other groups obviously have input too. There is some brilliant guitar work, and to my mind the strongest vocal performance on the album, right where it needs to be in the mix. Nick Wells has a good voice, but not unlike others in the arena, it is one that benefits from support, backing vocals of any gender to render it the voice at the front rather than the voice in the crowd. Where you hear something akin to backing vocals, the voice comes across so much stronger. There is a great saxophone solo towards the end of the track, though I think I would have gone tenor over alto or soprano. I believe Nick may be responsible for some of the mixing, and it is very good, but time and time again I have noticed that it is best that the lead vocals are recorded and mixed by a third party who can get the best from them.

Landing is a Ronseal moment, doing exactly what it says on the tin. With choral superiority assumed, and some effective and atmospheric drumming, this short interlude delivers. However my expectation was for something equally ominous to follow, but what we get is a good Procol Harum pastiche, Whiter Shade of Pale, Conquistador, and it might have contained more depth. Elijah‘s inspiration seems to come from Gary Brooker to give that Procol Harum feel. The vinaigrette solos stand out, each highlighting the protagonist’s strengths, drawing together some excellent performances, pertinent and piquant. The vocal here is a little lost inside the other instruments, still clear, but not in the ascendency. Once again, I like it, but even the strongest vocalists tend to give focus to their performance by having others provide differing tonal qualities. In isolation this is incredibly good, but it’s not where I thought Landing was taking us. It has some inspired moments, but overall, a bit too mellow.

For me, The Lantern is a killer – had there only been two tracks I would have purchased the album just for this. It is wonderful, almost immediately requiring a repeated performance. Every aspect of the performers is explored, an almost perfect collective whole. It’s a nice vocal, with hints at depth and backing. It has so many qualities, from Bowie, Genesis and Crimson. The bass line about four-minutes in builds like a miniature Supper’s Ready, guitar Michaelesque, that being Oldfield rather than the expected Rutherford or Hackett. Keyboards resemble something Tony Banks just might produce while the vocal performance is quite Peter Hammill. Yes, it has a seventies feel, but it’s also quite contemporary and gives me that pleasurable feeling of fuzziness. At around 10-minutes this could easily become dull, but to my ears it does not. Herein lies the titular mantle, not in the sense of a solid Earth’s crust, but in the lace form of a lantern mantle, delicate yet burning bright.

The One Who Stayed Behind has a nice intro, similar to Genesis’ Duchess, a gentle piece and all pleasant. Here the simplicity of the tune allows for the vocal to shine and claim the limelight. It’s nice, an interlude from the experiments elsewhere. sp-14 is again experimental, suite like, a gentle passage from Carmina Burana or something Wagnerian. It floats in a cathedral, other worldly with lyrics to match. One for the paranoid conspiracist, it develops, it grows, but ultimately, other than being a nice and chilled listen, it doesn’t really go anywhere. Nothing wrong with that, Tubular Bells is the same and it still remains one of my favourite diversions.

Clocks, the penultimate track, marks the passage of time. Clocks and cogs and running water. Golden Men goes for a Genesis style, just that little touch from having those backing singers from raising what is a memorable track to an even higher level, rare praise for the invisible touch. Even in terms of a song in the middle order of an album, this is an exceptionally good song. The production is incredibly good, but I guess the question from me is should he seek guidance from another to mix his own efforts? I can think of a couple of guys who could achieve that, but it does come down to budget. If we are lucky, a label might pick them up, but I think in the meantime, see if anyone shows an interest, or Steven Wilson gets excited by them. Add a few acoustic instruments, a few twelve-strings, some more sax, and I think you’re there.

The rhythm section of Kirk Watson and Matt Manning put in excellent support. H.G. Wells represent some of the great musicianship that exists in the prog genre, but every band between spark and flame needs that element (like oxygen) that raises the game. The mellotron can provide some of this, but the music may require something raw and acoustic, that lifts from good to great. To steal another of Herbert Well’s titles, The Shape of Things to Come.

So that’s all. It is worth it, there is a lot of good progressive music here, and I suspect our choices may differ. That to my mind makes the album even stronger. I really do recommend this album. Why? I want to hear more; I want to hear it with a production that can inspire them to aspire. There is something hidden beneath The Mantle, yet to be revealed below the crust.