A six-disc repackaging of the Drastic Plastic album from 1978, discs 1 to 4 available for review, so only the 5.1 mix and video content missing. Nostalgia aside, I have enjoyed my revisit to Bill Nelson’s Be Bop Deluxe beyond my expectations. There is something just…, well, just, it is hard to put one’s finger on it. Be Bop Deluxe are like the laboratory test tube baby formed from the DNA of Roxy Music, XTC, The Ramones, The Knack, and several others, all swirled up in a petri dish. Mixing rock with laid-back balladry and drum beats that I swear were nicked wholesale by The Knack and The Ramones. There is such energy, such that many current and rising bands could learn from it.

Each disc has been a great listen, but given the similarities of menu on each I would recommend a healthy gap between samplings. Of the downloads, my favourite is the 2020 mix, it’s just that little bit sharper with a better balance from an original that was not bad anyway.

If ever a recording has made the gulf between genres feel negligible, this could be it, but most of all I am revelling in an infectious sense of fun. It has a certain progressive cleverness but entertains raw riffs and rhythms from the punk era. Definitely ahead of its time and influential, possibly a template for many yet to come, guitars and bass delivering both warmth and depth.

This is a set to have and with the inclusion of the 5.1 mix it should really challenge your hi-fi set up. Each disc provides extras along with an excellent remix. For the core of the review, I listened to the 2020 remix/remaster. The sound is sharper, separation is hotter, and the general clarity stronger, however, had that not been available to me, there are no bad recordings in this set. The original, with its tweaks, holds up well. Timelessness is key, the material, barring a few obvious ’70s quirks, sounds fresh, and the influence on later acts is pretty clear. If ever there was a punk/prog crossover, this is it. Bizarre, but the pedigree of the musicians should – and did – leave a legacy that is memorable and entertaining for the right reasons.

Electrical Language (altered Images??) has that jangly feel that pop had as punk’s furore died away; electronica heavy but no loose notes, quality guitar when appropriate. New Precision? Just so, as Roxy Music seemingly gives birth to The Talking Heads. Hindsight is indeed a wonderful thing, the positive nostalgia continues throughout Panic in the World (The Cars, Ramones, The Knack). Superenigmatix (Lethal Appliances for the Home with Everything) has hints of Sheena is a Punk Rocker, the energy in each track is infectious, and probably seen at the time as subversive, yet there are moments when the dinosaurs of prog leave significant footprints (Visions of Endless Hopes), with twelve-string, mandolin and barking dog.
Tracks like the bonuses Autosexual and Love Is Mortal, on the third 2020 mix disc, just make me wish even more for that 5.1 disc. Musically, it is a wonder, despite having repetitions of tracks in their various reiterations, everything contributes. The bonus tracks would grace many albums, not just as footnotes or padding. So yes, all is well, the Drastic Plastic is elastic, stretching to please a variety of discerning listeners. It’s mellow, it rocks, it’s a fox with Sox, and something to be treasured, even though for some that will be with hindsight. 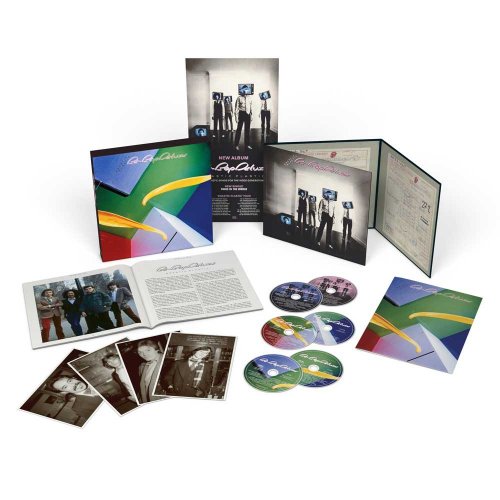