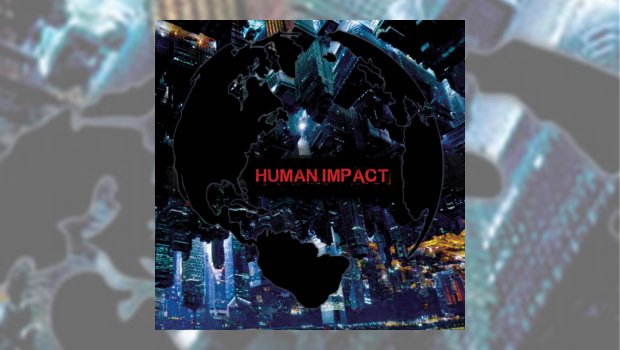 First let me apologise to the band. This is a very late review. I wrote it just before the first UK Lockdown in March. Then events overtook me. Nevertheless, the band deserves it to be published. So this is what I wrote when I first heard the album back at the beginning of 2020AD, the weirdest of all years.

What have we here? Human Impact is a band from New York, New York and they are, basically, a “supergroup”, a band made up from previous bands and my way of avoiding the tired old cliché “the sum of its parts”. They’re ex-members of Swans, Unsane and Cop Shoot Cop, and they have recently signed to Ipecac Recordings. In my ignorance I am not as aware of Swans’ music as I should be and even less aware of Unsane and Cop Shoot Cop, and so I am slightly ashamed.

The press release describes this music as “cinematic post-industrial filth rock, a dozen run down subway stops away from recognizable civilisation, as futuristic as it is grounded in its sordid heritage. The result is a potent, hard-boiled distillation of this sonic ethos”… and so would I.

Wait… there’s more. Whilst some press releases are overly hyperbolic, this one seriously makes me wonder why I bother other than to question the press release. Phrasing like “razor-edged chording and note choices” and “heaviness more implied than hammered home” mean that all I can do is point out whether this is hyperbole, though they did lose it a bit with “overarching dystopian soundscape”. Like Thomas More could even conceive of Filth Rock when he wrote his little tome back in 1516. Bloody hell! Just when I think I’m OK with all these genres (I’m really not) someone chucks another one in! Filth Rock is a new one on me.

Listening through my little 4-inch studio monitors, the recording seems second-to-none. This bodes well for my crappy car stereo commute [those being the days before working from home], where I [used to] listen to most of the music I review. But then, Martin Bisi should have it sussed by now because he’s recorded Sonic Youth, and a couple of other bands from which this band were made up.

The music video I have included is quite subdued compared to the rest of the album. Everything that draws me in is here. It has musicians who are not showboating their abilities. They are simply expressing raw emotions with distorted vocals and telecasters and rhythm, bolted to the floor by the bass and drums, all flavoured with amelodic ambient incidental sounds. Even so, there are moments during which I find that I must use a favourite word of proglodites, used to death in such circles, and that word is “epic”, not because any of the tracks are overly long, but because it is impressive and remarkable!

I’m reminded of the deadly earnestness of Killing Joke, the savage power of Ministry/Revolting Cocks, the riffery of Filter, the innovation of Dub War (because of Richie Glover’s bass), even the theatricality of Devin Townsend (a bit), the melodic content of certain bands from the grunge era and so much more. But with a new feel.

I’m even reminded of the rock solid combination of Derek Forbes and Brian McGee’s work which provided the engine behind the best stuff Simple Minds ever did and later, the work they put in as the backbone of Propaganda. I choose my words carefully and I always like to point out; “reminded of” does not mean “sounds like”. I’m referring to the bedrock-steady bass and drum riffs that relentlessly drive the music along, making any changes in the chords a feast of modal distortion.

Apparently, Filth Rock is Post-Industrial, so there’s another genre for you to add to your collection. This music is heavy and not particularly easy listening unless you like some of the bands I’ve mentioned above… it has dyspeptic lyrics and abrasive vocals, probably lots of metallic dropped tuning – and none of this pseudo-heavy nonsense where bands confuse loud with heavy. It takes elements that I love in music but presents them in a slightly skewed way, reminding me of other music that I like, without ripping it off. This is music created by people who get what Filth Rock is (heh-heh: “Filth rock”), and know what to do with it, not just ape it with a pale and unoriginal facsimile.

As to the question some of you are asking: What is the genre? Is it Prog? Is it fuck. Is it progress? I think it is, in a way. I must confess, I just use TPA to get your attention when music I like grabs my attention. If you need to ask if it is “prog” because you want to hear some Genesis and Yes clones then you possibly won’t like Human Impact. But I am constantly second-guessing my prejudices and I am often very wrong about the single-minded approach that Prog fans and TPA readers have, for which I apologise unreservedly. Maybe you’ll embrace Filth Rock and look for more, but do please give it a try!